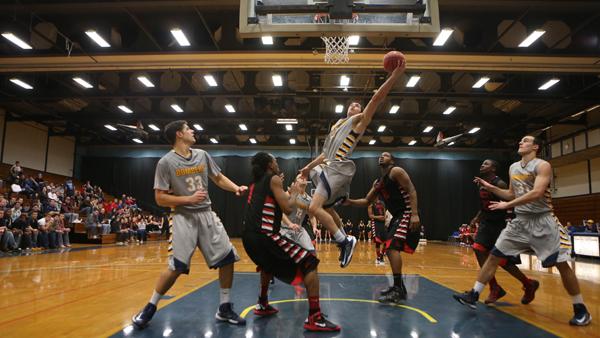 In many cases, incorporating a transfer student into a team is a process that takes more than one season to fully accomplish, but not for senior forward Travis Warech.

Warech is in his first season with the men’s basketball team after starting in his first three seasons with Division II St. Michael’s. He was named to the Northeast 10 Conference all-rookie team his freshman season and was named to the commissioner’s honor roll in his junior season. Despite his on-court success, Warech was not happy at St. Michael’s and decided to leave after the end of his junior season.

“There was shaky, shaky nonsense going on at St. Mike’s,” Warech said. “It just wasn’t the right fit for me, I had a pretty OK career there, but things didn’t turn out the way I hoped.”

St. Michael’s had a losing record in each of the past three seasons. His former coach Michael Harding declined comment on Warech’s transfer but did wish him the best with his career.

A few weeks after the end of season, Warech called senior guard Sean Rossi to inform him of his interest in transferring to the college. The two had been friends since middle school and had been teammates on the New Jersey Panthers, an Amateur Athletic Union team they played on in between their junior and senior years of high school. Rossi said he was ecstatic when Warech told him the news.

“I immediately jumped up and went nuts [when he told me],” Rossi said. “We talked for 30 minutes about how he’s going to love playing for our team.”

Rossi arranged for Warech to visit the campus last summer and participate in a shootaround with the team. Warech had set up visits to two other Division III schools after his visit for Ithaca, but he didn’t need them. He was convinced. His potential head coach wasn’t.

“It was odd for us because typically I’m not going to take a kid for one year,” Bombers Head Coach Jim Mullins said. “What’s the point?”

Mullins had never seen Warech play, so he relied on colleagues and the personal recommendations that came from Rossi and his father. Mullins said the words of the Rossis, combined with his first impression of Warech, convinced him that Warech would fit into the team perfectly.

“I had those questions pretty well laid to rest talking to the Rossis,” Mullins said. “When I sat down with Travis, we looked each other in the eye, and I felt very comfortable with the way he conducted himself.”

While adjusting to the campus has not been a major difficulty for Warech, he said the campus’ size took him aback.

“I have to plan on waking up earlier to get to class,” Warech said. “It’s also hillier here, and living in a dorm brings back old memories.”

After three years at St. Michael’s, Warech found a home in Ithaca. After arriving on campus and receiving Mullins’ blessing, Warech officially joined the college in the summer and played on a summer league team with Rossi, which Rossi said acted like an extended preseason for the two of them.

In his first game with the Bombers on Nov. 16, Warech recorded a double-double, helping the Bombers to a 76-69 win against SUNY-Potsdam. He has started in every game, averaging 11.6 points per contest — the third best on the team. Warech said he is happy to be able to enjoy playing basketball again.

“I just wanted to win,” Warech said. “I wanted to have a good senior year, have fun playing again since I kind of lost that the last year or so at St. Mike’s. I wanted to get back and enjoy playing the game again.”