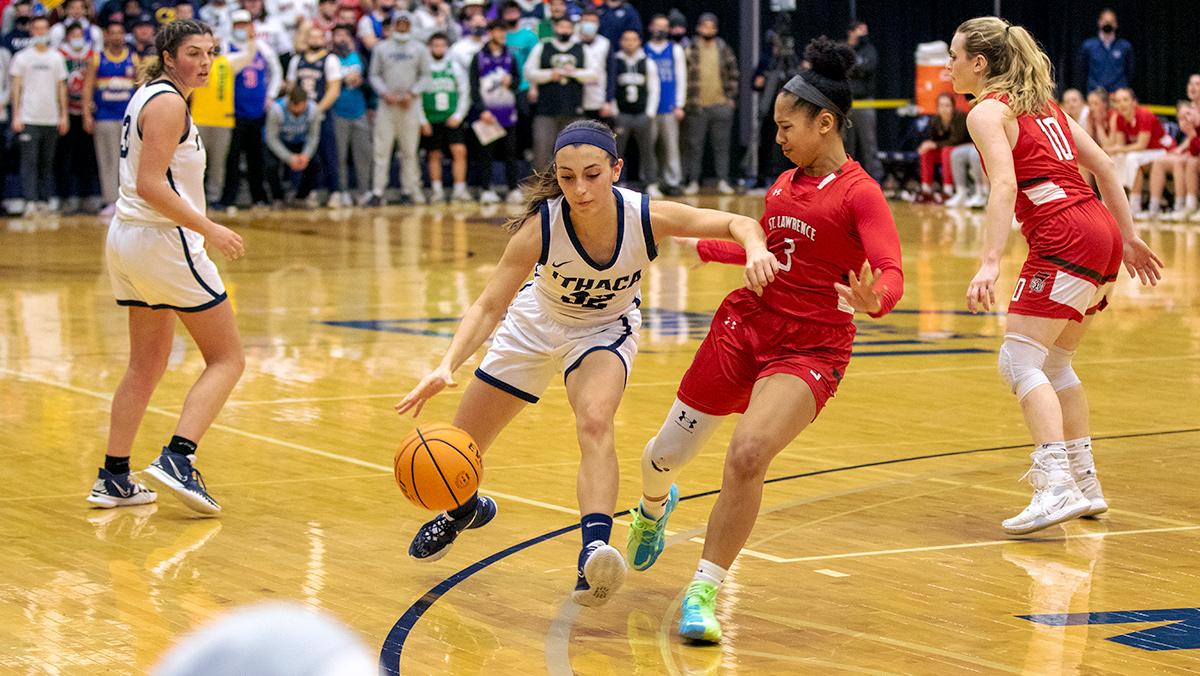 The National Association of Collegiate Directors of Athletics (NACDA) released the Learfield Directors’ Cup standings March 31 for the first time since 2019. After Fall 2021, Ithaca College sat at 44th in Division III in the cup, but vaulted up 30 places to the 14th spot thanks to strong winter performances by the Bombers.

The Directors’ Cup is based on each college’s postseason performances in the multiple competitions that their women’s and men’s sports take part in, with awards for all three divisions. The inclusion of multiple sports incentivizes colleges to produce strong programs in all sports rather than focus on one or two. Since 2018, Division III schools are judged on their men’s and women’s soccer and basketball teams as well as up to 14 other sports with the highest point totals. Teams can earn a maximum of 100 points for winning the national championship, and points are broken down by place depending on the size of the bracket or national poll.

The Bombers’ women’s basketball and men’s swimming and diving and wrestling teams all contributed heavily to the college’s rise in the rankings due to their success in the winter. In the Directors’ Cup, the Bombers winter athletics earned a total of 364.25 points, with 56 points coming from the men’s swimming and diving team, 50 from the women’s basketball team and the wrestling team earning 46 points.

Senior Jordan Wallace, one of the wrestlers at the college, said he was impressed by how much winter sports impacted the college’s ranking after the college moved to the 14th spot. He said he thinks it is due to the high standards the athletes at the college hold themselves to.

With the Bombers moving up to the 14th spot, they are one of the six teams that have been in the top 30 since the Directors’ Cup started in 1995, along with Amherst College, Calvin University, Emory University, Middlebury College and Williams College. The ranking is the highest Ithaca College has been ranked after the winter season since joining the Liberty League in 2017. In the 2017–18 season, it landed at 16th, and fell to 22nd during the 2018–19 season.

Kevin Markwardt, head coach of the men’s and women’s swimming and diving teams, said that during his 41 years at the college, he has seen the college ranked all over the standings.

He also said how much moving up in the rankings means to the college and athletics outside of the winter performances, because it shows prospective students and other colleges how good the Bombers are.

“To me, it’s really exciting because these rankings are a big reflection on your program,” Markwardt said. “For somebody who is recruiting such as myself, it’s something I try to use to my advantage. It is a tool that helps us tell recruits that it is not just our program, but also our athletics in general.”

Senior Logan Bruce, part of the women’s track team, also said the improvement in the Directors’ Cup helps build confidence for the athletes at the college.

“I think that it really shows the dedication that the student-athletes have to their respective sports,” Bruce said. “I think that it’s a really good confidence-booster to the athletes that we are top 20 in Division III, and that we are really getting a little reward for the school as a whole and how much time we put into our athletics.”

Graduate student Megan Yawman, a starting guard for the women’s basketball team, said the athletics and their success caught her eye, leading to her commitment to the college as an undergraduate student. She also said the high ranking is more meaningful this year, because of how the COVID-19 pandemic impacted athletics, both at the college and nationwide.

“What these rankings say about Ithaca’s athletics is that we are the best of the best, and it’s not a one-time thing,” Yawman said. “It’s something we expect across the board in all seasons and all sports every year, and it is something that we’ve been able to prove. It’s just amazing that we’ve been able to do this given where we were at last time this year, and not many athletics departments can bounce back and have the seasons that all three seasons are having.”

Markwardt also said he believes being ranked 14th speaks volumes to the college’s athletics, and the department’s efforts to achieve this level of success.

“I think it says a lot about our athletics. The Learfield Cup is designed to give a representation of your whole athletic department,” Markwardt said. “We are given enough to be successful, and if you’re hard-working, get good recruits and figure out how to make it work, you can be successful, which shows the breadth of our program and how multiple sports are being successful over a period of years, which speaks very highly of our athletics as a whole.”