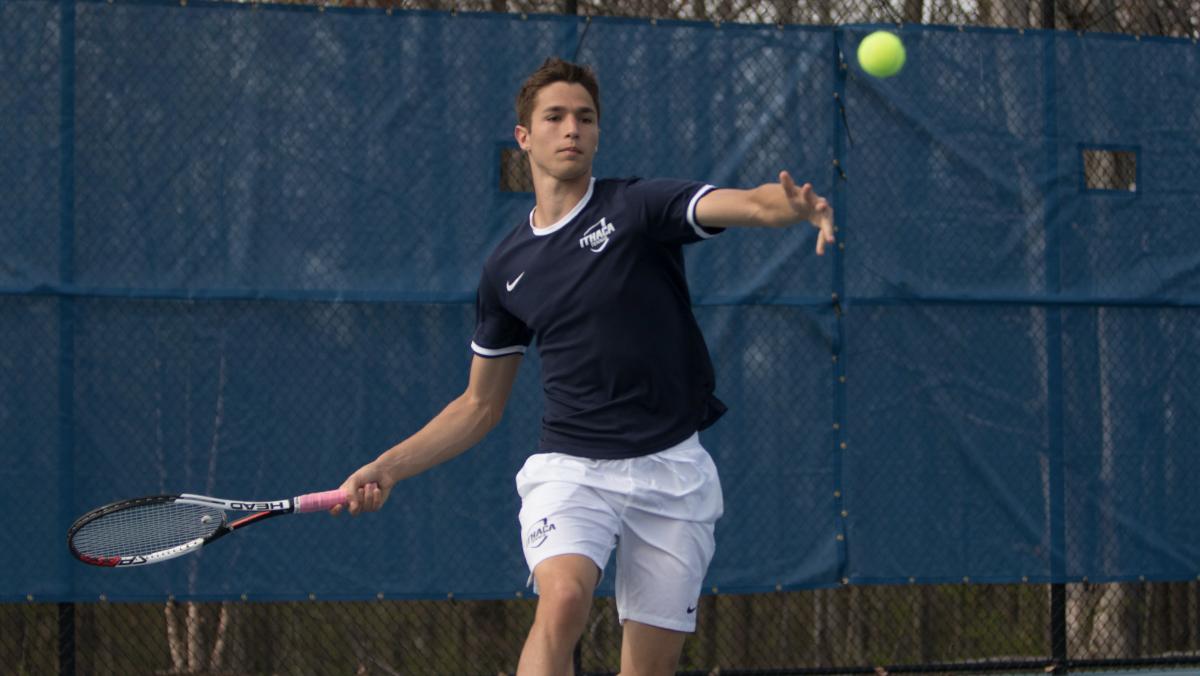 CAITIE IHRIG/THE ITHACAN
Sophomore Stefan Lazarevic is getting ready to hit the ball during his doubles match with teammate freshman Max Prestwich. They won their match 8–3.
By Annette Hogan — Staff Writer
Published: April 28, 2017

The Ithaca College men’s tennis team welcomed Alfred University for their last home match of the season April 27. The Bombers swept the Saxons 9–0, making this their seventh Empire 8 sweep of the 2016–2017 season.

The Bombers close out conference play 7–1 and improve to 11–5 overall with one nonconference match up before conference championship play.

The Blue and Gold took a quick lead capturing victories in all three doubles flights.

First and third flight doubles shared an 8–2 victory over their Alfred opponents.

Continuing strong play over Alfred, the South Hill squad did not let up in singles play.

Boleslav captured the first singles win of the evening in the fifth flight, defeating Kemper in two 6–0 sets.

Clinching the match for the Bombers was sixth flight senior Charlie Vaca. Vaca captured his third win on the season besting Nordin 6–0, 6–3.

This was Vaca’s played last home match of his career, but didn’t let the thought of that get in the way of his victory.

“I didn’t think about [the last home match] at all,” Vaca said. “I was just making sure I was able to play and eventually win and I’m just happy to finish my career on a win.”

The Bombers received strong singles play from each flight. The second sets of the first and second flight singles were the closest of the entire match.

“Connecticut College is really the focus right now and we have to have a good solid practice tomorrow [April 28],” assistant coach Jordon Smith said. “Then the focus will be on improving our singles play.”

The Bombers are back on the road again for the last regular season match at 9 a.m. April 30 in New London, Connecticut where they face Connecticut College.