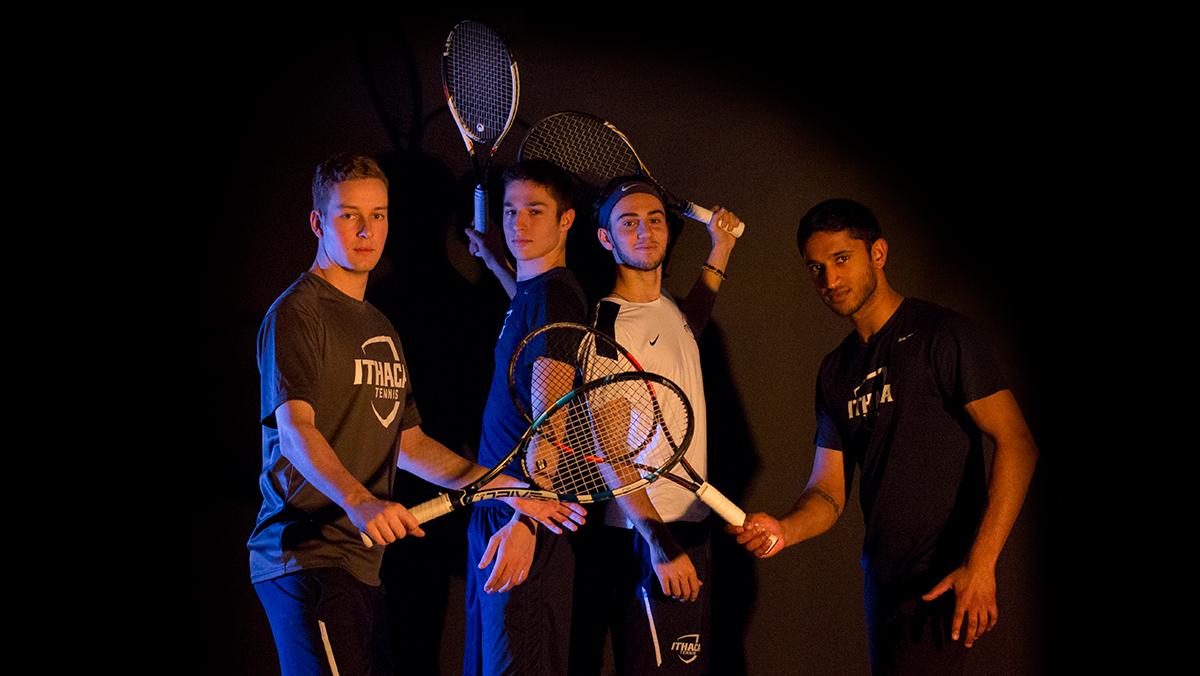 At the age of 8, freshman Minos Stavrakas was at his summer house in Greece, when his friend introduced him to tennis. Ever since, he has been hooked on the sport. As Stavrakas began exploring colleges, he knew tennis would be his ticket to the United States and a good education.

This season, the team has four international players: sophomores Stefan Lazarevic from Belgrade, Serbia, and Mihir Siddartha from Dubai; freshman Colten Lavery from Alberta, Canada; and Stavrakas from Greece.

Not being able to give out athletic scholarships at the Division III level has turned away many potential international players, Smith said. Once athletes learn they cannot receive money for playing a sport, the communication between them and the coaches stops.

For those who want to play at the Division III level, their focus is on school work.

“Playing Division III gives you more time for academics,” Stavrakas said. “I had offers from Division I schools, but they weren’t as good academically.”

Stavrakas said he knew the opportunities he gained through the physical therapy program would help him build a better resume and lead him to a good job. Lazarevic and Siddartha also chose the college because of the physics and film programs, respectively.

Head coach Bill Austin said that when recruiting international players, he has to sell the academic programs the college has to offer.

When looking into colleges, Siddartha said, his goal was to find an excellent film program while playing tennis.

“I always wanted to play tennis and go to school here,” Siddartha said. “Tennis is the major part of that because you can’t really do that in another country. Sports in college aren’t as promoted. They think that if you are in university, then you are probably just there to study, and sports doesn’t go hand-in-hand with that, but here it does.”

The recruiting process typically begins one of two ways: The player will send an initial email to one of the coaches, or a coach will email an athlete they found through a recruiting service, Austin said.

After initial communication from both sides, the first step is making sure the athletes understand that no athletic scholarships can be given. If the athlete is still interested, the coaches will continue with the recruiting process.

“Step two is you watch their video,” Smith said. “You look up their rankings so you see if they would be a fit from a talent or level perspective, and then you talk with them.”

Once the coach becomes more serious about recruiting the player, the emails will continue, and both parties will set up either phone or Skype calls. They will have multiple calls until all questions have been answered or a visit to the college is set up.

The introduction of Skype, Austin said, has greatly helped the recruiting process by increasing the number of international recruits.

“It’s a lot easier now to talk to somebody on the other side of the world than it was 10 years ago,” Austin said. “You didn’t have Skype. You had computers, but it was all email. Skype allows them to step into our office, and it allows us to step into their living room. I think that is a huge part of it — the ability for more personal communication on opposite ends of the globe.”

Not all international students are able to come over to visit, so those who cannot will do as much research on the college as possible. Those who can will spend time with the team, go to classes and stay overnight in a dorm room. Siddartha said he was unable to visit the college, so he made sure to do enough research before accepting admission.

Lavery said he remembers lliking the tennis team and campus when he visited.

“The biggest thing for me when visiting was the campus was nice, but I got along well with all the guys on the team, which I think is good,” Lavery said. “It’s a large team for tennis. It’s larger than most. Everyone was nice and welcoming. We even talked to them. They were saying how everyone on the team gets along really well. Just having a lot of good guys helped.”

Once an athlete decides to attend, communication will continue between the coach and athlete, but not as much as before, Lazarevic said. The coaches make sure the athlete is prepared to come to college and knows as much as possible about the tennis program and expectations.

During the recruitment process, one of the main things the coaches look for is if the player’s personality will fit well with the team. Smith said he likes having a mix of international and American players because it adds diversity to the team.

“Stefan is really outgoing, fun, loud personality,” Smith said. “He’s kind of goofy. Minos — he’s a little more serious, but he has a goofy side to him as well. Mihir — he’s a film student, so he brings an artistic type of personality to the team. Colten is just a great kid. He’s probably the nicest kid I’ve ever met. I don’t see how anyone could dislike Colten.”

Once the players arrive at the college and start practicing with the team, the coaches are able to see how everyone will get along and what the team dynamic will be.

“Having guys who are in a similar position as me, we helped each other out,” Lazarevic said. “We knew what each other was going through. You could reach a better level of understanding.”