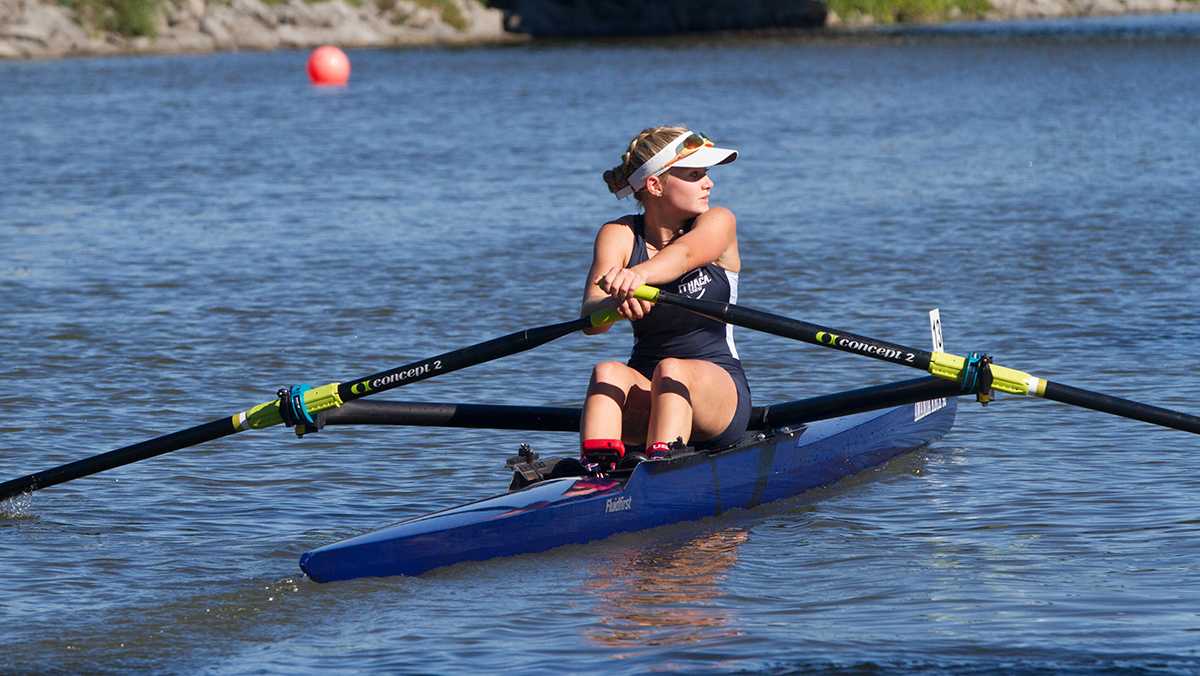 The Ithaca College sculling team traditionally consists of upperclassmen making a transition from the rowing team. But this year, for only the second time in program history, a freshman — Jennie Brian — has claimed a spot on the sculling roster.

Chloe Lewis ’16, who joined the team when it was created in 2012, was the only other sculler to join the team as a freshman in the program’s history. Sculling coach Beth Greene said that is only because the team usually doesn’t have experienced underclassman scullers trying out.

“We’ve always been open to the idea of having underclassmen scull, particularly those who would be lightweights,” Greene said.

Brian trained at GMS Rowing Center in New Milford, Connecticut, before coming to the college. She competed at the 2015 USRowing Youth National Championships, where she placed ninth overall in the double sculling division.

Despite her success, she said Brian did not want to row at a Division I school. She said she thought the college had the perfect combination of athletics and academics.

“My mom showed me an article, ‘Ithaca College sculling team combines experience with new rowers,’” she said. “That made me want to try out for the team.”

Greene said that at the beginning of each season they hold tryouts for new team members. Typically, she said, this includes upperclassmen from the rowing team who are looking to try sculling.

“On the sculling team, we generally have a tryout process that involves a time trial, and you do better if you have previous sculling experience,” Greene said. “Because Jennie had the experience in high school, we look at her on the same level as some of our new upperclassmen.”

Senior captain Rachel Dowd, who has been on the team since her sophomore year, said that even though Brian is the youngest on the team, she already has a leg up on her teammates.

“Being an upperclassman on the team doesn’t necessarily mean you have the most experience,” Dowd said. “A lot of juniors and seniors on our sculling team are actually pretty new at sculling, so they are the ‘younger’ rowers compared to some of the underclassmen who rowed in high school.”

Coming into the season, Brian said she tried to keep an open mind.

“I didn’t really know what to expect trying out,” she said. “I had no idea how much experience the girls had. I wasn’t sure that since I’m really small and they’re bigger if they would be faster than me.”

Brian will race in single, double and quad boats this season. The sculling team began its season Sept. 25 at the Cayuga Sculling Sprints, where Brian won the open single sculling event. At the Greene Mountain Head Regatta Oct. 2, she teamed up with senior Emily Vosburg in the double sculling event and placed fifth.

Even though Brian doesn’t have the typical rowers’ build, Greene said she is very athletic in her own way. Brian, who is more petite than most rowers, usually competes in the lightweight category.

“She’s not someone you’d look at right away and say ‘we want her on the team,’ but she told us her scores, which were very good for her size,” Greene said. “I told her, if you’re determined to row, we will let you row here.”

In her first year, Brian said she is looking to continue improving and dropping time. In her first time competing in doubles Oct. 2, she and Vosburg finished in 21:21.3. Brian said her goal for the end of the season is to finish in under 21 minutes.

“For this season, I’m curious to see how I stand with the collegiate rowers,” Brian said. “I’m really excited to see my results.”