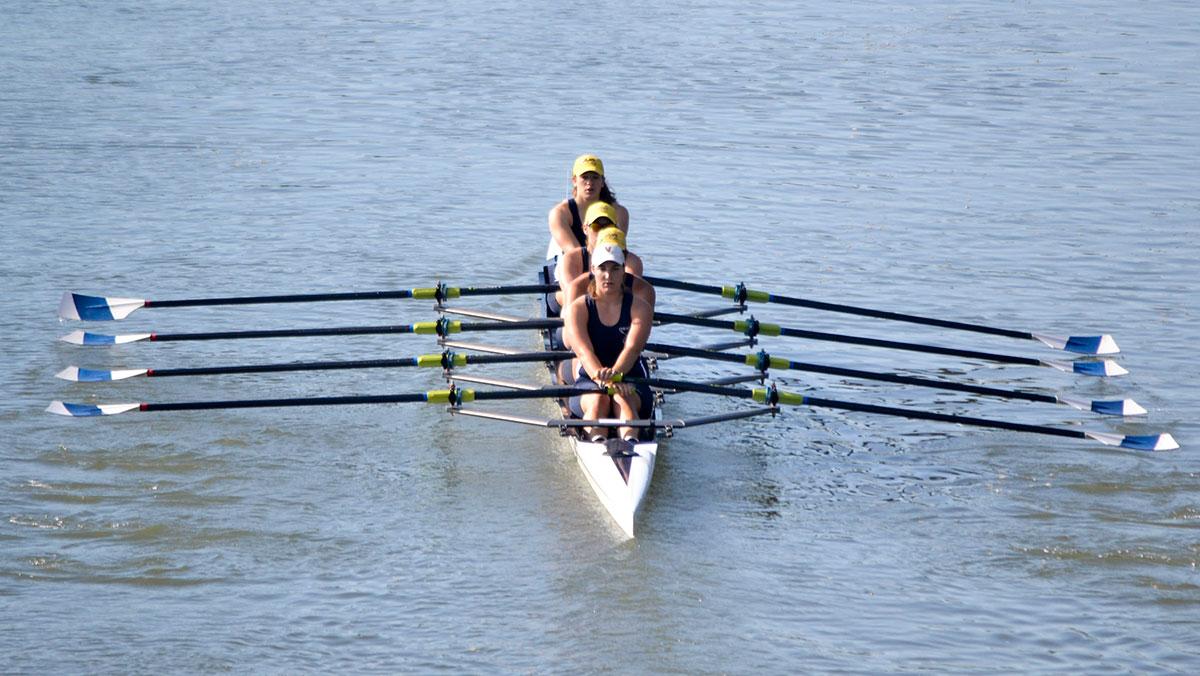 For most college athletes, playing a varsity sport means having years of experience. The sculling team, however, provides an interesting dynamic. While it is as competitive and time-consuming as every other sport on campus, and while many rowers come into the program with experience, others come in with none, and many of them excel.

On the roster this season, four of the nine rowers came into college without prior experience. All of those women are seniors this year.

Senior Jennie Peterson said she had no intention of joining a varsity sport when she first arrived on campus.  It wasn’t until Peterson was approached by sculling coach Beth Greene and then-assistant coach Anthea Barnett at the Row for Humanity event that she began to consider joining. Peterson attended the event with a friend who was part of Habitat for Humanity during her freshman year.

The coaches told the 5-foot-10-inch tall Peterson one of the reasons they saw her as a good prospect was her height. Tall people usually make good rowers because the length of their bodies allow them to get longer, stronger strokes than someone who is average height. Peterson said she had never found a sport before crew where, as a tall woman, she felt she belonged.

The hardest thing for her coming into crew was developing the techniques that some women had background in. However, Peterson said she saw this as a good thing.

“Girls who had been doing a certain technique for however many years would need to change their whole habit — and habits are hard to break,” she said. “So I think in a way, yes they had the advantage of rowing in high school, but the girls who didn’t row in high school get to be formed by the coaches at Ithaca.”

For experienced rowers, getting integrated onto the team is a different process. Senior sculling captain Delaney Pfohl rowed for only one year in high school and described her career there as less than ideal. Pfohl said her teammates treated her poorly after she knocked a four-year rower out of the top boat at Fayetteville Manlius High School. After only one year on the team, Pfohl decided to stop participating despite her love for the sport. She said she saw college rowing as the perfect opportunity to start fresh.

But even with her one year of experience, Pfohl had to make adjustments coming into college. She said the biggest of these was adjusting to how much more of an investment the sport requires.

“[College rowing is] a lot more competitive, and the commitment level is just a lot higher,” Pfohl said. “We had practice for two hours, four or five days a week in high school, but here it’s six, maybe seven days a week, sometimes two practices a day. But because of that, it’s a lot more rewarding, and I get to hang out with girls who are basically my family at this point.”

During Pfohl’s freshman year, the coaches kept all of the first-year rowers, whether they had experience or not, on the same team. However, head women’s crew coach Becky Robinson has since changed her approach to getting women comfortable on the team.

Robinson has started allowing freshman rowers who have experience to meet some of the varsity squad and has given them the opportunity to make the team if they had the skills, strength and mindset to do so.

Junior Emily Morley had a successful four-year high school career at the Emma Willard School in Troy, New York. Morley said the way that Robinson handled having both experienced and inexperienced women her freshman year was beneficial to the rowers on the team.

“If you pull the scores and mesh well with the other girls in the boats, then Becky will keep you on varsity for the spring,” Morley said. “If you don’t have the skills or the experience, she’ll move them down to novice so those girls can develop their skills there, which I think is a great way to do it.”

Each rower agrees that the sport has become an extremely important part of their lives. Experienced or inexperienced, the women on the sculling team this year have been provided with the opportunity to keep rowing in their future.

“I think the best part about sculling is that you don’t need three other girls to go out in a boat,” Peterson said. “I just feel like after college I could get myself a nice racing single, and even if I never race again, being able to go out on a lake or on a river and row will always be able to satisfy this new part of me. Rowing has become a part of who I am.”