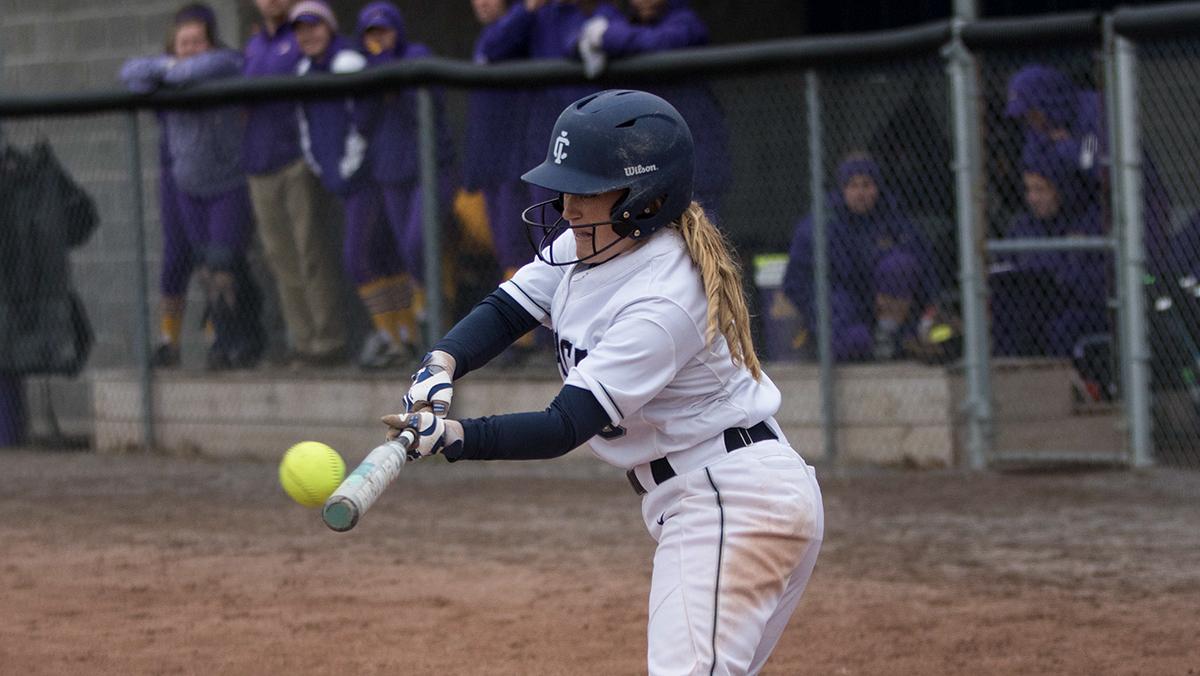 The Bombers swept their doubleheader against the Soaring Eagles April 22 at Kostrinsky Field.

April 22 was also Senior Day for the Blue and Gold. Among those honored were outfielders and captains Jessie Fleck and Gabbie Litz.

In game one, the team remained silent in the first inning before putting up six runs in the second inning. The game ended early in the sixth inning with the Bombers winning 8–0 in a mercy rule.

Sophomore pitcher Haley Congdon had eight strikeouts, gave up two walks and just one hit in six shutout innings. The win is Congdon’s 11th on the season.

In game two, the Bombers came out swinging on offense, putting up nine runs in the first four innings, including six in the fourth inning. They would go on to win 9–2.

In her ninth win of the season, freshman pitcher Emily Holden allowed four hits and an earned run, but struck out nine in her seven-inning performance.

In the Bombers’ doubleheader against Utica College April 23, the Bombers were split with the Pioneers.

In game one, the Pioneers defeated the Bombers 4–3, ending the Blue and Gold’s 10-game winning streak.

Freshman pitcher Shannon Grage hit a two RBI single, scoring Brown from third base and Wright from second base giving the Bombers a 3–0 lead. The Pioneers were able to stop the inning from continuing.

These three runs would be the only runs the Bombers would produce for the rest of the game.

In the fifth inning, Utica junior infielder Sabrina Stransky led off the inning with a walk followed by single down the left field line by junior catcher Kimberly Beattie. Stransky came around to score on a single by junior pitcher Brittany Meka.

Stransky hit a leadoff single in the bottom of the sixth inning. Rice hit a double down the line to score Stransky, making the score 4–3 in favor of the Pioneers.

The Bombers would go out one, two, three in the top of the seventh inning, giving the Pioneers the win in game one.

In game two, the Bombers got out on top first again thanks to a solo home run from junior outfielder Allie Colleran in the top of the first inning.

The lead for the South Hill squad would not last long as the Pioneers scored four runs in the bottom of the first inning.

Freshman catcher Jamie Miller walked to start the inning, then advanced on an infield single by freshman pitcher Alyssa Samborin. Senior catcher Kassidy Ogren walked, loading the bases for Fredericks who was hit by a pitch, giving her an RBI and Utica its first run of the game.

In the third inning, the Bombers scored two runs making the score 4–3. However, in the fifth inning, the Pioneers scored another run taking the lead 5–3.

The Bombers had another two-out rally starting with Brown’s double, followed by a single from Wright to score Brown.

Grage hit a single and advanced on sophomore outfielder Annie Cooney’s sacrifice bunt. Sophomore infielder Nikkey Skuraton singled as well, bringing Grage home and tying the game 5-5. Colleran reached base on a fielding error by the third baseman, scoring Skuraton from second base to give the Bombers their first lead since the top of the first inning.

The Blue and Gold were able to hold on to their lead throughout the remainder of the game and win 6–5.

The South Hill squad’s next game is a doubleheader against Cornell University at 3:30 p.m. and 5:30 p.m. April 26 at Kostrinsky Field.

Softball defeats SUNY Oneonta in a doubleheader at home