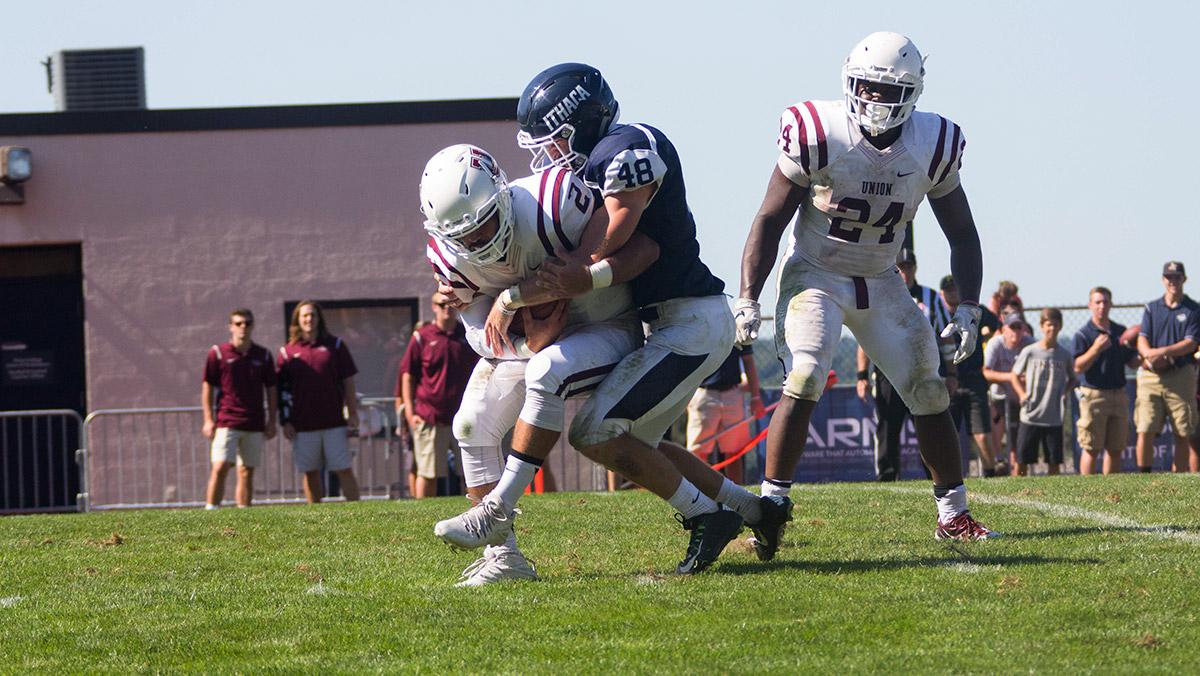 Sophomore Pat Minogue played football in high school as a defensive end and wide receiver. Now, he starts for the Bombers in two entirely different positions on the field.

In 2015, Minogue became a linebacker and punter for the Bombers, but he never started a game. Now with one year of experience in these new roles under his belt, Minogue has solidified himself as the starter at both positions. In his first game as a sophomore, on opening day, Sept. 3, while hosting the Union College Dutchmen, Minogue totaled more tackles than he did his entire freshman year.

Minogue said switching to outside linebacker required him to take on more responsibility. As a defensive end, his efforts were focused on rushing the passer. However, playing outside linebacker in Ithaca’s 3–4 defense, he still is expected to blitz but now has to learn the intricacies of pass coverage, meaning how and when to cover receivers.

“He had a very different role last year,” Welch said. “This year, it was a matter of him earning the starting position, which he did, and now he’s taking off with it.”

In 2015, Minogue was not the only player making the switch from defensive end to linebacker. Schnayder Termidor ’15 was transitioning to linebacker during his senior season. Minogue said Termidor was his role model on and off the field.

“I remember talking to [Termidor] at the end of the season, and he said I helped him, but I don’t believe that for a minute,” Minogue said.

Minogue had nine tackles, a sack and a forced fumble in the first game of the 2016 season. Pass coverage was a skill he did not need to learn when playing defensive end but was a highlight of his 2016 opening–day performance. With 55 seconds left, Union had possession, only a touchdown away from taking the lead, and Minogue intercepted a pass. This is a feat uncommon for linebackers, especially pass rushers. In total last season, junior Kenny Bradley led linebackers with three interceptions, a high number for a Division III athlete. In a single season in the NFL, Al Richardson of the Atlanta Falcons and Lance Mehl of the New York Jets set the record in 1980 and 1983, respectively, for the most interceptions in a season by a linebacker with seven each.

Minogue said he did not see his interception as anything too impressive.

“I was in the right place at the right time. … I still have plenty to work on in pass coverage,” Minogue said.

Minogue said he does not let this issue affect him and instead views his size as beneficial for his game.

“I know that I’m going to be faster than the guy in front of me. When I see a big tackle, I’ll slap his hands and run around him,” he said. “If I let the big guys touch me, I’m in trouble.”

Minogue’s teammate, senior linebacker Devan Shambo, said Minogue’s high energy and vigorous style of play reflect his philosophy on and off the field.

“Pat’s always one of the first hats to the football, even in practice. He’s all about hard work and leading by example every day,” he said.

Minogue said he is going to continue to progress at his new position on the field.

“I’m just going to keep my nose in the dirt and try to lead by example,” Minogue said.

Junior walks onto football after two-year hiatus from sport