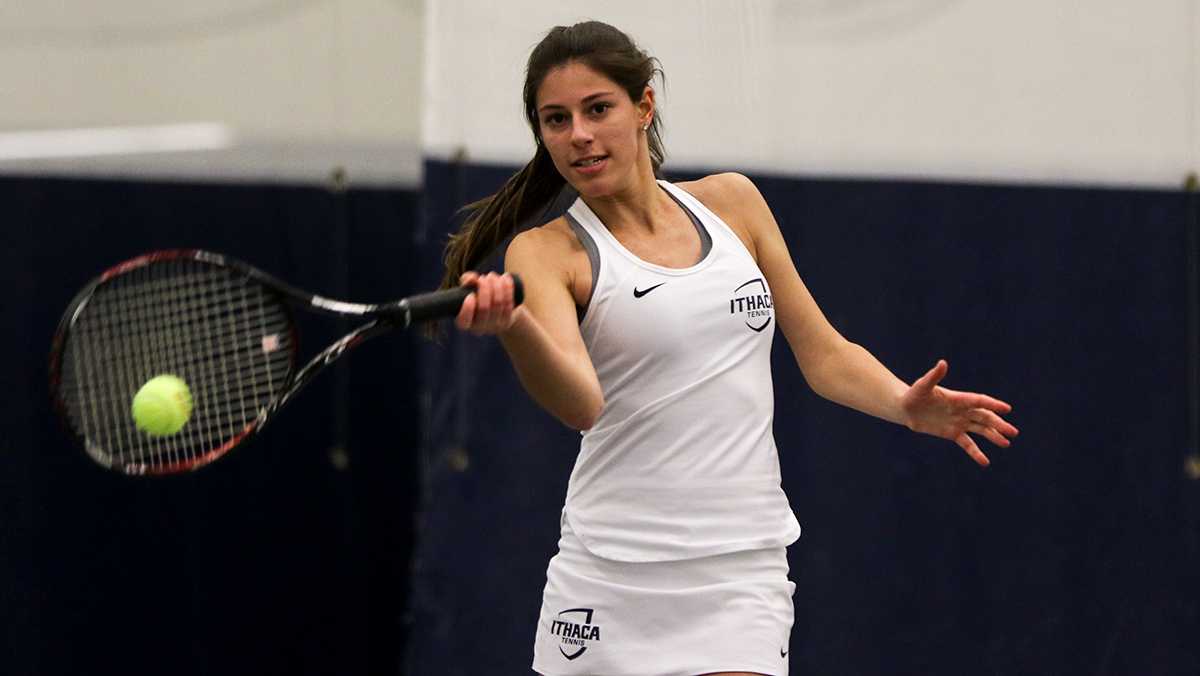 SAM FULLER/THE ITHACAN
Freshman Brianna Ruback about to hit the ball to the other side of the court during her match in the win against SUNY New Paltz 6–3.
By Annette Hogan — Staff Writer
Published: April 1, 2017

To begin the match, the Bombers’ doubles took two of the three flights, holding the lead going into singles play. Each of the doubles tandems defeated their opponents 8–2.

Not only did the Bombers have strong doubles play on the day, but they had high percentage singles play, as well.

The Blue and Gold captured four of six singles matches over the Hawks.

“Our team really brought it and were really competitive,” Alkhazov said. “The team dynamic is really great, and our spirit and teamwork is going to help us win.”

Fifth flight sophomore Taylor Ginestro ended the match for the Bombers in a hard–fought battle against sophomore Lindsay Haley of New Paltz. Ginestro defeated Haley in a three-set match that ended in a tie-breaker. Ginestro took took the first set 6–2, but fell 4–6 in the second. She battled back to capture the victory 10–6.

“I had seen so many of my other teammates play so well [today],” Ginestro said. “I tried to envision myself playing my best tennis, and I did it.”

The Bombers are continuing non-conference play to gear up for the NCAA tournament. Although they started the spring season off with three straight losses, they have turned it around and have captured three straight wins.

“The key was that they had confidence coming off spring break and they were ready to compete,” head coach Bill Austin said.

The Blue and Gold gear up for their next match at 4:30 p.m. April 4 in Ithaca as they welcome the University of Rochester.