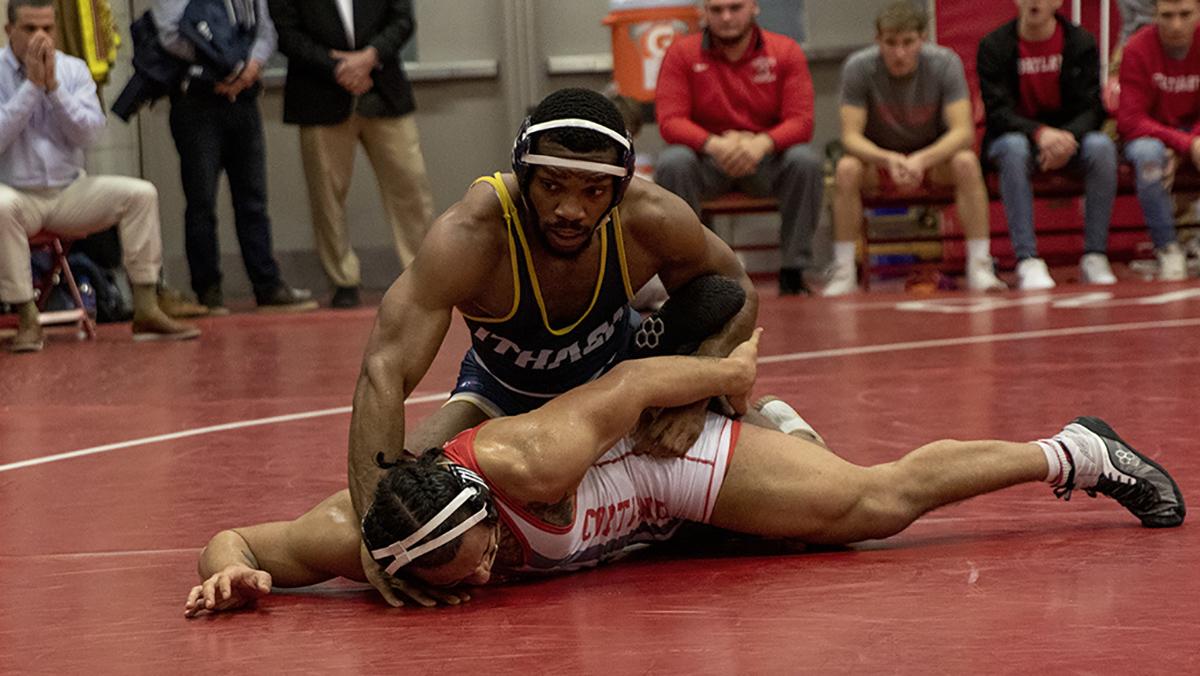 As the Ithaca College wrestling team gets set for the NCAA Regional Tournament in 2022, it has been recognized for being the third-best Division III program nationwide by Rofkin Wrestling, a subscription-based website that publishes wrestling content.

With three NCAA Division III team championships, 12 individual national championships, 83 All-Americans, and 12 top-five team finishes at the national tournament, the Bombers’ wrestling program has had quite a decorated run in the past decade. The college came behind Wartburg College and Augsburg University on the list.

Some of the latest and greatest Bombers to be named by Rofkin Wrestling include Sam Schneider ’21, Seth Ecker ’12, Nicholas Sanko ’11 and current assistant coach Ricardo Gomez ’14. The college has had 28 wrestlers recognized nationally since the 2011–12 season, including four NCAA champions.

This year marks the 26th year in charge for head wrestling coach Marty Nichols ’90. As Bombers’ wrestling alum and three-time Division III All-American from 1987 to 1990, he has been the intellect behind the program’s success from his wrestling days back then to his coaching days today.

Nichols said the program is deserving of the acknowledgement due to the guidance the program has had, not only from the coaches themselves, but from the wrestlers on the team as well. Nichols said he is also grateful to people connected to the program who have helped contribute to its success.

“The athletes we get here recruit other athletes from their home towns or home areas and spread the word,” Nichols said. “There’s a lot of guys I can call now and we’ve done really well with their guys. We have a lot of alumni out there as well and they give us phone calls and send us messages as well [saying] ‘Hey, take a look at this guy’ and ‘Take a look at that guy’ so it’s a big community of former Bombers that keep us tuned in to a lot of this stuff.”

Nichols also reflected on the expectations he has for the team of winning the conference titles and winning nationally. He said experience is important when trying to compete at the national level, considering junior Travis Jones is the only current athlete on the team who has competed in the national tournament.

“As we always say, ‘the standard is the standard,’” Nichols said. “These guys keep getting better all the time. There’s going to be a gap in there because they didn’t get an opportunity to compete in the national tournament. We only have one guy that has been there that can tell them what it’s to be there. You need to have that experience. If you’ve already been there you know what the intensity is and you know what you need to do.”

Assistant coach Marc Israel ’05 is currently in his 14th season with the Bombers, helping the Bombers earn this honor by adding his expertise over the past decade. As a former wrestler for the Bombers, he too knows what it takes to win because he was a two-time All-American and he placed third at 165 pounds as a senior.

Israel said he is grateful for the ability of the wrestlers to do things using their own sense of knowledge and accountability.

“We just have had amazing student-athletes who really hold each other accountable for their work ethic both in the classroom and in the wrestling room,” Israel said. “We’re there to close any gaps and any loopholes and help them have a successful career on the mat and in the classroom, both are equally important to progression here at Ithaca [College].”

The alumni presence does not stop there, because Gomez, a Bombers wrestling alum, has served as an assistant coach for the program since the 2013–14 season. He won the NCAA Division III championship at 125 pounds during his senior season in 2013.

Gomez said he feels the program has been led by past wrestlers who have served as leaders, as well as the current coaching staff and their abilities that have helped develop the present–day tradition of leadership and success.

Gomez noted the importance of patience and waiting for the wrestlers to have access to the resources to stand out at the right time and win championships. He said he feels the team looks for “well-rounded” athletes in the recruitment process, including their ability to listen to the coach’s expertise.

“It’s having [the wrestlers] peak at the right time and be mentally prepared for nationals,” Gomez said. “Ithaca [College] is not only competitive on the wrestling mat but also academically. A big component is how are their grades, who they are as a person, how disciplined they are. You can sense when you meet the athlete where they wanna go or if they set goals. It’s trying to get to know the athlete and I’d prefer to have a kid that is coachable rather than have a state champion that’s not coachable at all.”

The Bombers will be getting set to compete for the NCAA Regionals on Feb. 26 and 27 before heading to the national championships March 11.