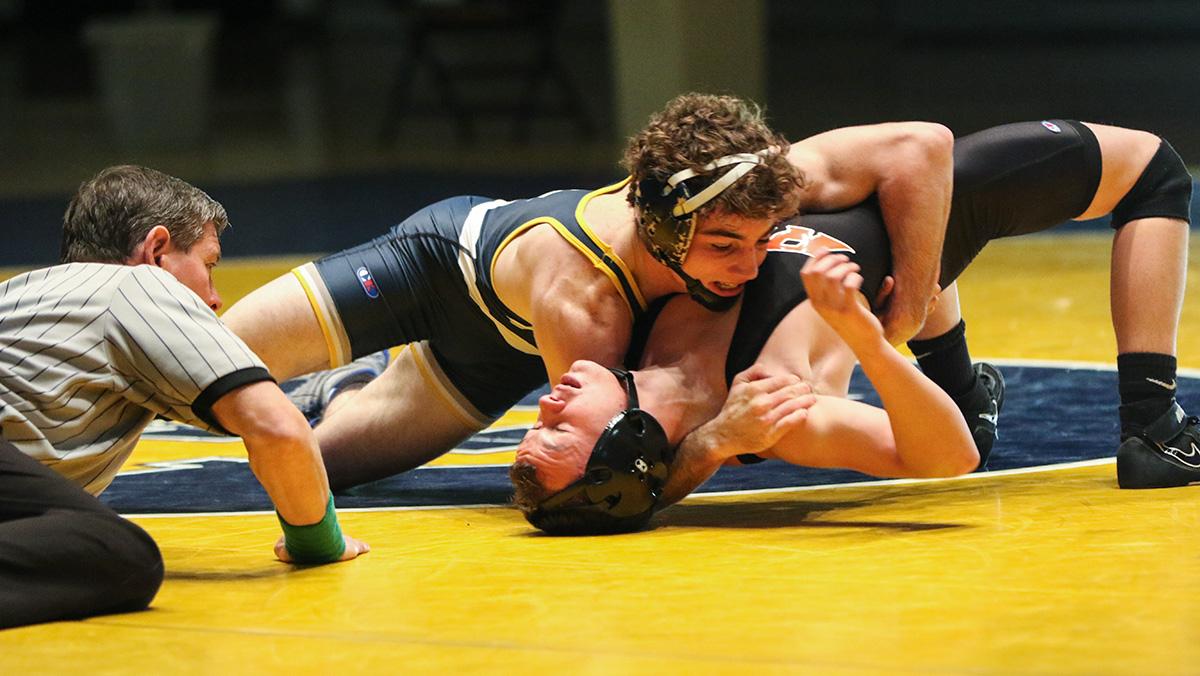 The meet showcased junior Bryan Israel and seniors Carlos Toribio and Jimmy Kaishian, three Bombers who are currently ranked in the top 10 in the nation.

Israel, who is ranked first in the 133-pound weight class according to d3wrestle.com, won by forfeit in the 141-pound match.

Captains Toribio and Kaishian, who rank fifth and seventh in their respective weight divisions, dominated their matches.

Toribio topped Tigers freshman Tim Baumer 19–2 by technical fall in the 197-pound weight class. He opened up with a 4–2 in the opening period and would go on to tally 15 unanswered points.

Toribio said the team’s relentless attitude has contributed to the strong start to the 2016–17 season.

“We’re just being mean on top, we’re being tough on our feet, and I don’t think kids want that,” Toribio said. “When they have to wrestle Ithaca they know they are going to have a hard time.”

Kaishian earned a victory over Tigers’ freshman Isaiah Ocasio in the 133-pound weight division by a 15–5 major decision.

Kaishian said the coaching staff, facilities and trainers are what separate the Bombers from the rest of Division III.

“We have the best coaches, the best facilities, the best field partners in the country,” Kaishian said. “Our intensity in the practice room, our work ethic day-in and day-out. A win like this goes to show that we’re making strides towards that national title.”

Sophomore Ferdinand Mase set the tone of the meet early when he trounced Tigers’ junior Andrew Flanagan 19–5 by technical fall.

After victories by Kaishian and Israel, sophomore Demetri D’Orsaneo triumphed over Tigers sophomore Cole Murphy 20–9 by major decision in the 145-pound bout.

Sophomore Anthony Fano followed suit with his 17–1 victory by technical fall over RIT freshman Coty Lutz in the 157-pound match.

Following Fano was freshman Al Ciccitto, who made quick work of his Tigers’ opponent, freshman Tommy Follman. Ciccitto pinned Follman down early on in the first period to win the 165–pound bout.

The lone individual loss for the Blue and Gold of the evening came when junior Nicholas Vogel was defeated by a decision of 7–3 against RIT freshman Joe Lupisella.

Sophomore Jacob Ashcraft picked up his teammate when he defeated Tigers junior Nicholas Greenquist by a 12–4 major decision in the 184-pound match.

Sophomore Jacob O’Brien concluded the meet by gutting out a gritty 3–2 decision over RIT freshman Sam Weinger in the 285-pound division.

Head coach Martin Nichols said he was impressed with the team’s performance on the night, but said there is still some room for improvement moving forward.

“They were aggressive. There’s things we need to work on,” Nichols said. “We also have to pin guys when we get them on their back. They wrestled hard and they came out there to score points and make the fans happy.”

The Bombers’ next dual meet pits them against Oswego State at noon Dec. 10 in Oswego, New York.