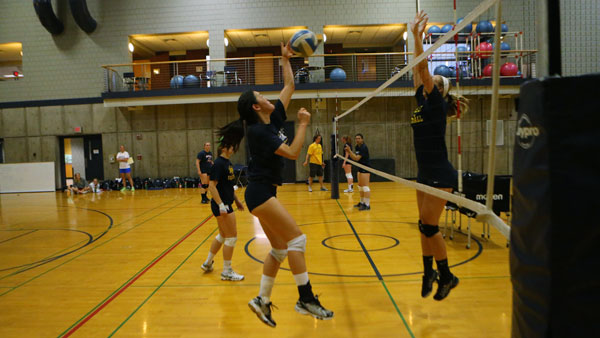 Durst Breneiser/The Ithacan
Senior captain Syline Kim attempts to return the ball over the net, while Siobhan Sorenson, freshman outside hitter and middle back, goes up for a block during a practice at the Fitness Center.
By Mark Warren — Staff Writer
Published: September 1, 2013

Head coach Janet Donovan’s voice was filled with excitement as she read aloud the new additions to her squad this season. As her eyes looked over the roster, Donovan stumbled over her words, trying to decide which players to talk about first. Along with five returning starters, the women’s volleyball team has added four impact players that will change the team for the better, she said.

“This team is completely different — we only have five returning starters,” Donovan said. “We have a very talented freshman class along with a junior transfer coming in. We definitely have talent this year, but it’s going to take some time for the players to come into their own. Last year, it was a wonderful accomplishment for us to make the conference championship tournament. This group is looking to not only do the same thing, but hopefully have a more positive record at above .500.”

The Bombers finished 13–15 overall in 2012, and their season came to an end with a loss to Stevens Institute of Technology in the semifinals of the Empire 8 Tournament. Headlining the new players recruited to help bolster the team is Rylie Bean, a junior transfer from Erie Community College. Bean was a first-team selection to the NJCAA Division III All-America volleyball team and was also named the NJCAA Region III Player of the Year in 2011. Donovan said she is impressed with how quickly the outside hitter has fit in with the team and expects great performance from her.

“She’s already come in and pretty much secured a starting role as a middle for us,” she said. “Rylie is doing a phenomenal job with her play and her leadership already, so it’s really nice to have her step in and already be experienced.”

Among the other recruits is Grace Chang, a 5’11” outside hitter from San Jose, Calif. As a high school senior, Chang helped the Valley Christian Warriors finish second in the Northern California State Championship. Donovan said she was drawn to Chang partly because of the Warriors’ reputation for having a great volleyball program. She also said Chang will compete for a starting spot right away.

Shaelynn Schmidt is another outside hitter who will vie for significant playing time this year. Donovan said the freshman from Patuxent High School in Lusby, Md. caught her eye when Schmidt visited the college earlier this year.

“[Schmidt] came from a strong high school program, and when she visited our campus over the summer she attended one of our clinics,” Donovan said. “We were very impressed with her, and we are very happy she chose Ithaca College.”

Donovan said the team will likely make mistakes at the beginning of the year, but with everyone learning from one another, the team will only get better. She said one of the best parts about coaching a talented young team is seeing how quickly the players improve.

“The kids we are bringing in are going to be very young and inexperienced at the college level,” she said. “To watch them develop and take charge is going to be a lot of fun for us on the coaching staff.”

While Donovan is ecstatic about the recruits she has brought in, she said she didn’t want to gloss over the talented returning athletes who will play key roles for the Blue and Gold. With any young team, there will be errors, but Donovan is depending on her veteran players to help their younger teammates minimize them.

“Our returning players Syline Kim, Justine Duryea and Dylan Gawinski Stern all have wonderful experience,” she said. “Those three are going to help us a lot in that category and hopefully help these younger players mature, while also being there to pick them up when they make mistakes.”

Kim, a senior right side, shares her coach’s excitement about the new players. She said she is confident that the new additions will improve an already solid lineup.

“I believe our team will be solid this year, because we have a strong set of returners,” Kim said. “Our incoming freshmen, along with our junior transfer, will strengthen our team.”

Senior outside hitter Justine Duryea said she is also anxious to play with the freshmen recruits who will be joining the team.

“We have a lot of new girls coming in who are all very talented,” she said. “The girls that are returning gained a lot of experience from last year, so having most of them back will only add to our depth.”