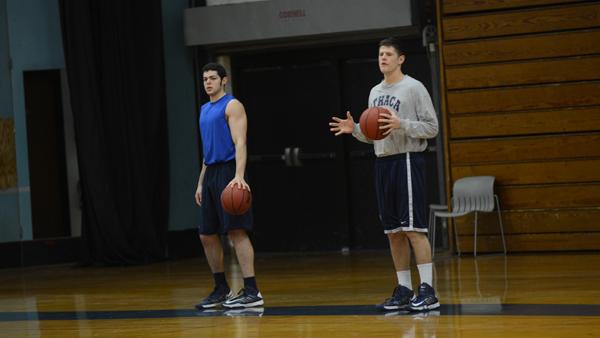 Rachel Woolf/The Ithacan
From left, senior forwards Travis Warech and Andrei Oztemel look on during a basketball practice in Ben Light Gymnasium on Tuesday. Both have injuries that have kept them sidelined for the past three games.
By Christian Araos — Staff Writer
Published: February 6, 2013

Injuries to senior forwards Andrei Oztemel and Travis Warech have stifled the men’s basketball team’s momentum, contributing to the Bombers losing two of their last three games heading into the final stretch of the regular season.

Without the two forwards, the team has struggled on the boards with a six-rebound difference being instrumental in the Bombers’ 62-61 loss against Nazareth last Friday. The next day, Houghton’s 13 offensive rebounds kept the winless team in the game throughout, until Ithaca pulled away to win by nine. Mullins said he is fully aware of the statistical impact Oztemel and Warech have on the team.

“With Travis and Andrei both out, we’re around 28 points and 13 rebounds between those two guys,” Mullins said. “I don’t know if the rebounding is going to be made up, but we have to find some scoring out of other people.”

The team currently has a two-game road trip ahead of them on the schedule. One game is against Hartwick College, a team that is currently a game and a half out of a postseason spot. The next is against Stevens Institute of Technology, a team tied with the Blue and Gold for first in the Empire 8. Given the importance of those games, Mullins said this is an unfortunate point in the season for injuries.

Oztemel said he is making slow progress to a return before the end of the regular season.

“I personally want to come back for this coming weekend, but it’s not looking like that’s going to be possible,” Oztemel said. “I’ll be back for the senior weekend games.”

The injuries have allowed for freshman center Andrew Brandt and freshman guard Chris Mcilvaine to get increased minutes. Mullins praised both players for their contributions. Brandt played 12 minutes in the loss against Nazareth, and Mcilvaine scored 11 points in 28 minutes coming off the bench in the win against Houghton. Mcilvaine said he and the other young players are ready to contribute.

“I’m not really sure what’s to come in the next few games,” Mcilvaine said. “I’m ready to do whatever the team needs to do in order to win.”

Mullins also singled out freshman forward Brad Johanson and freshman guard Sam Bevan for their performance Saturday. Johanson scored nine points in 13 minutes, and Bevan added eight points and four rebounds in 11 minutes. Mullins said with the critical pair of games coming up this weekend, it will be a trial by fire for the freshmen class.

“I was pleased with the freshmen class, but the problem is that there is a different skill set,” Mullins said. “Andrei and Travis have been big on the boards and scoring, and Travis has been great defensively. It isn’t just those points that we miss. If we can find those points, it’s still the defense and rebounding that we’re missing.”