International tennis players swing into action for the Bombers 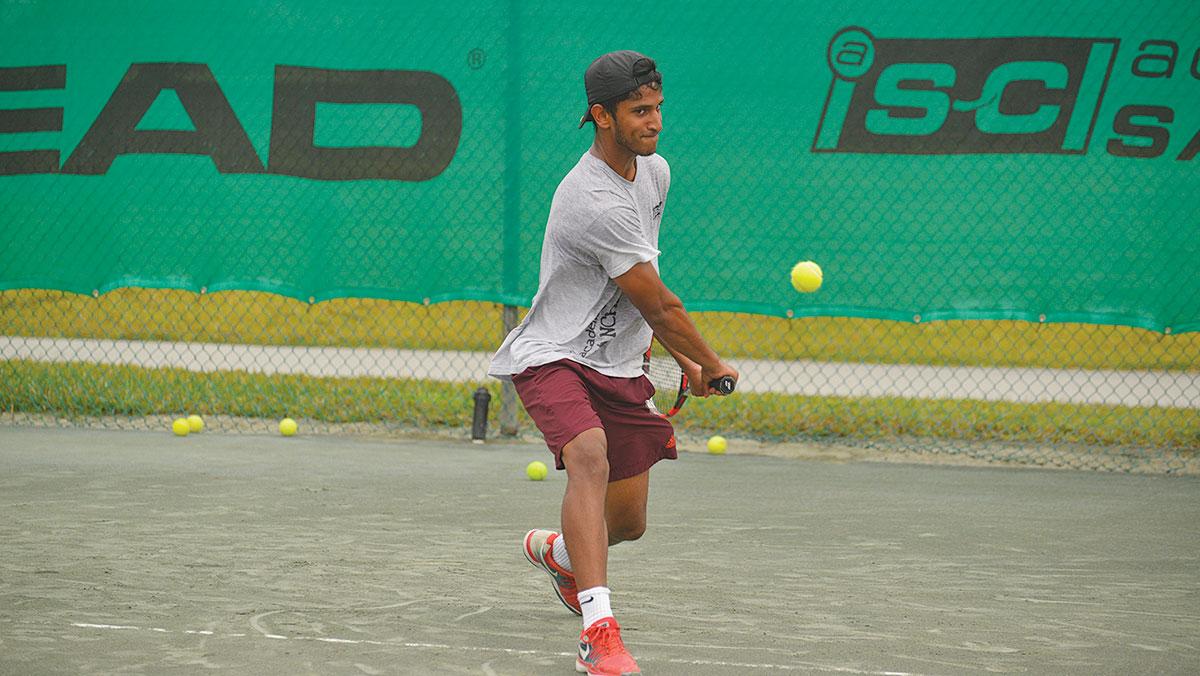 On a humid August day in 2014 in the heart of Santiago de Guayaquil, Ecuador, sophomore Ricardo Palau said goodbye to his friends and family, knowing he wouldn’t see them again for five months. With his father, he boarded a plane at the José Joaquín de Olmedo International Airport to make the six-hour flight to New York City.

“I was really nervous at first,” Palau said. “I knew I wasn’t going to see my friends every day, and I was scared whether I was going to like living in a new place and be able to manage it.”

Making the transition to college is hard for any freshman, but it is even harder for those who have to cross oceans and continents to obtain their education. They are thousands of miles away from their families and friends, and they could be in a different climate weatherwise or experience language barriers.

Palau is now one of three international students on the men’s tennis team, as he was joined this year by freshmen Mihir Siddartha and Stefan Lazarevic, who are from Dubai, United Arab Emirates, and Belgrade, Serbia, respectively.

Head coach Bill Austin said that with the help of their upperclassman teammates, all three players transitioned well.

“I think that, from my perspective, I think they have all transitioned nicely,” Austin said. “The team aspect gives them a little bit more of a feel — it gave them some place to belong. It gave them a kind of family atmosphere, that being from so far away gives them a ready-made group to be a part of, people to rely on and people to ask questions.”

Despite their international commonality, they all took different paths to getting to Ithaca and encountered many challenges along the way. 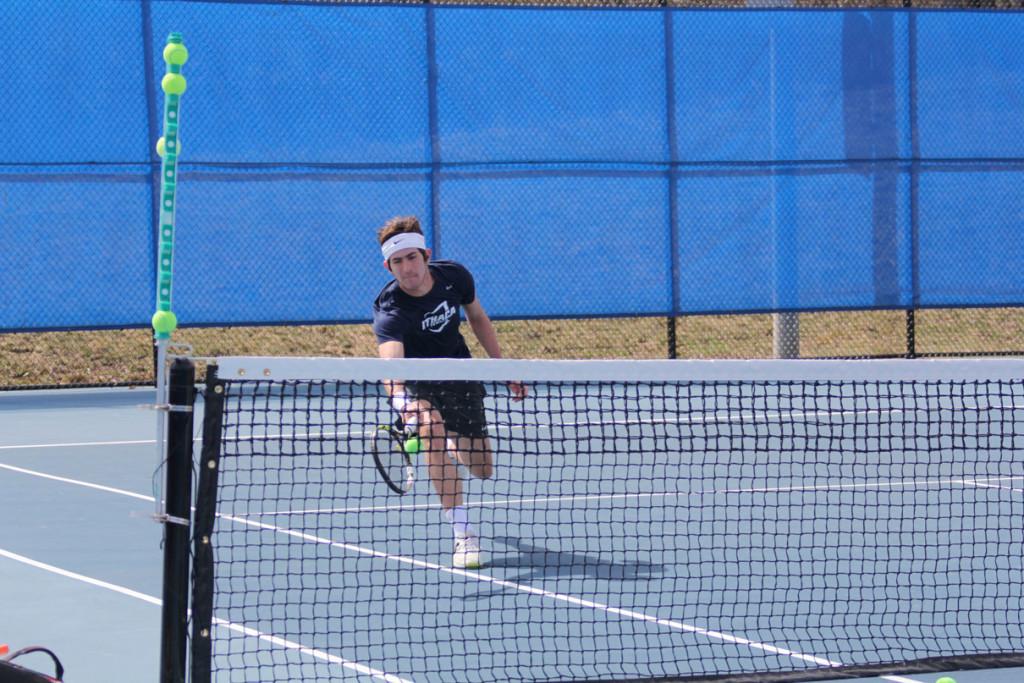 Palau grew up in Guayaquil, the largest city in Ecuador. He said learning to adjust to American culture was hard for him and that he sees many differences between common Ecuadorian and American culture.

“I had been to the U.S. in the summers with my family, but this was a different experience,” Palau said. “It’s a culture shock.”

He said that in Ecuador, people seem warmer and go around hugging people, but people here are not used to that. In addition, he said, he thinks the people in Ecuador are more passionate than those in the U.S. and show all of their emotions on their faces.

Palau said he also had a hard time adjusting to the dining hall schedule because in Ecuador, they eat breakfast at 8 a.m., lunch around 2–2:30 p.m. and dinner around 8–9 p.m.

“The food here is so different; it’s hard for me,” Palau said. “We have different time to eat, and when I’m used to eating dinner, the dining hall is closed.”

Palau said that in Ecuador, soccer is the most popular sport, and he grew up attending soccer games with his family.

“In my country, when you’re born, they give you a soccer ball, and you go to the stadium,” Palau said. “It’s something that I really love.”

At the age of 14, Palau said, he saw a Roger Federer match on television and decided he wanted to play tennis. Federer is a Swiss tennis player who is currently ranked No. 3 in the world.

“I thought to myself, ‘This guys is amazing. I really want to do this,’” Palau said. “So I started playing tennis outside school in my free time.”

Palau practiced on his own until he arrived at the New Hampton School, a boarding school in New Hampton, New Hampshire. Under the direction of head coach Veronica Lima-DeAngelis he began to grow as a player.

“She gave me a huge opportunity to be able to play tennis in the United States,” Palau said. “I was really thinking of not playing tennis in college anymore, and she told me I should continue playing and doing something that I really love. She was a really good influence.”

During his time at New Hampton, Palau decided he wanted to continue studying in the U.S. and sought out a college adviser to help him. The adviser gave him many options, but he said he ultimately picked Ithaca College because of its location.

“The idea was to keep studying in the North because a lot of my friends were also studying in that area, and my cousins study in Boston,” Palau said.

Palau has been a member of the tennis team since his first year at the college. Austin said Palau is a good asset to have on the team and that he is always trying his best.

“Ricardo works hard. He’s got a good attitude,” Austin said. “When Ricardo gets into matches, he’s always working hard and trying to put his best foot out there.”

With two years left on the team, Palau said, he wants to continue to improve and to build his confidence.

“I am trying to learn more every day from the players we have because they are all good,” Palau said. “I want to improve more in my confidence. I feel like sometimes that is something that holds me back from becoming what I could become.” 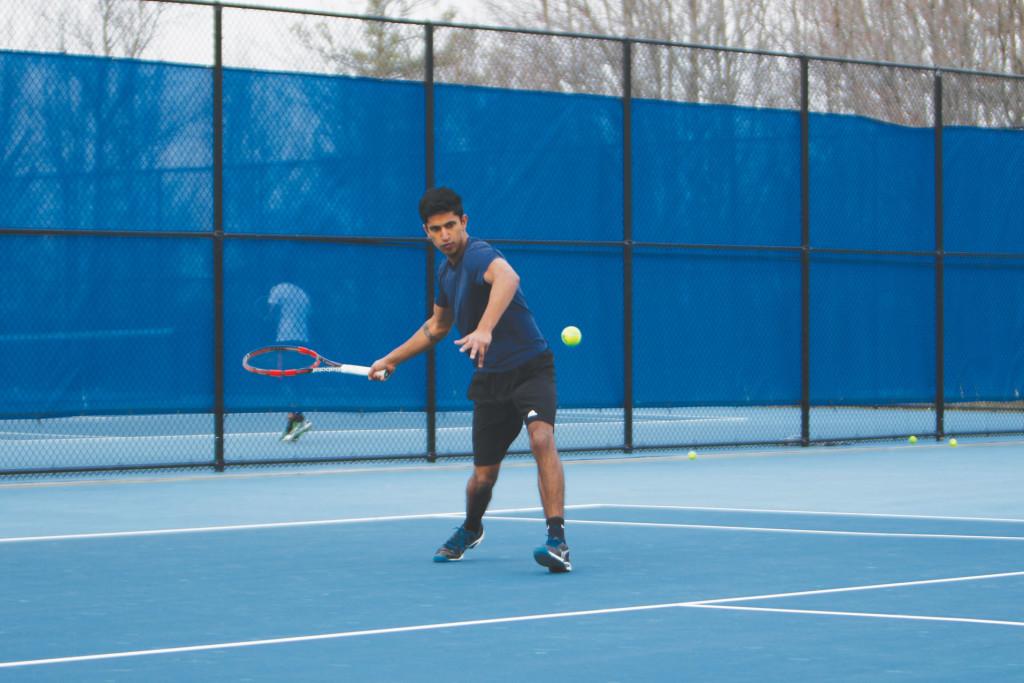 When Siddartha walked into his first practice at the college, he had never played on a tennis team before, as his training up until that point had been all individual.

He said he was not used to the team-first mentality he encountered here.

“I was not used to the whole-team tennis. It’s not like where I played,” Siddartha said. “It’s really cool, especially in a sport like tennis where you don’t get rowdy. During college tennis, it’s very rowdy, and there is a lot of comradery.”

He was born in Dubai, the capital of the United Arab Emirates, a country to the east of Saudi Arabia, and said he always has had a passion for sports. At the age of 12, after growing up watching his father compete in local competitions, he said, he decided to give tennis a shot.

“I played soccer, basketball and track,” Siddartha said. “But tennis was my main thing. The rest were just because I liked sports.”

Siddartha played tennis daily and competed in regional tournaments. However, by the time he was 14, he said, he began to outgrow the competition.

“The problem with staying in Dubai: You play the same people in every tournament you play,” Siddartha said. “There are a couple good players, but that’s pretty much yet.”

At the age of 15, he landed at the Academia Sánchez-Casal, an international tennis academy based in Barcelona, Spain. The academy has trained tennis greats such as Andy Murray, Grigor Dimitrov and Andrey Kuznetsov. Two years later, he transferred to the Naples, Florida, location of his tennis academy to continue training at the elite institution.

Siddartha said he chose the college so he could pursue his passion for film as a writing for film, TV and emerging media major, and to have the opportunity to continue playing tennis.

“It’s a very good school for that and very practical,” Siddartha said. “I never wanted to try professionally — I just wanted to get to a level so I could compete in college for four years because I think it’s a good sport to stay healthy and active.”

Austin said even though he has trained at an elite academy for the past three years, Siddartha still has many things to work on.

“He needs to make that transition from the drilling part of tennis to the competitive part,” Austin said. “There is a difference between being able to hit the ball really well and translating that to hitting the ball really well when someone is trying to win a point against you.”

Despite the fact that he has now moved three times since the age of 15 and lived on three different continents, he said moving never gets easier.

“It’s always a bit difficult leaving people, but I’m used to it,” Siddartha said. “It’s not like I can’t cope with it. It’s just what happens when you move somewhere. It’s not easy.”

After college, he said, he does not know exactly what he wants to do, but he knows one thing for sure: He wants to continue moving around.

“I want to travel a lot because traveling is the one thing you can do to make yourself a better person,” Siddartha said. “I like a change of pace, so I wouldn’t be surprised if I ended up moving from here before my four years are over just because I like moving around.” 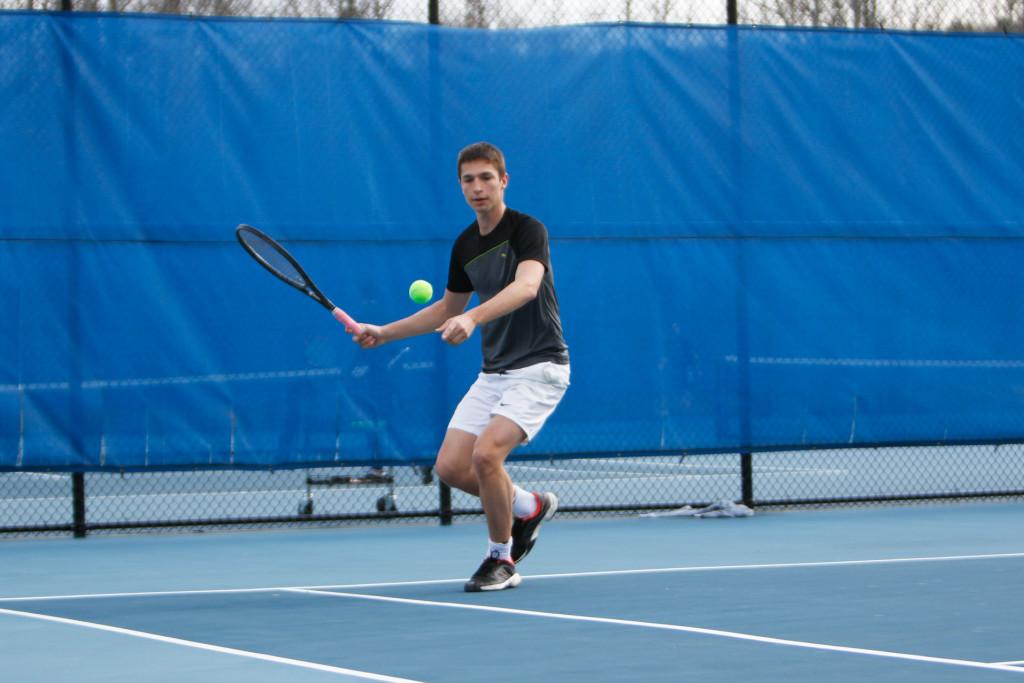 For Lazarevic, not only does he have to adjust to a new school and new team, but also he has to learn how to play on a new surface.

In Serbia and many European countries, tennis is played on a clay surface, compared to a hard surface that is played on in collegiate competition. According to Austin, there are many differences between the two surfaces.

Austin said the clay courts tend to be a little bit slower, so the ball doesn’t come to you as quickly as on the hard courts, meaning you have more time to prepare. In addition, the ball doesn’t skid as much, and you have to change your footwork in order to accommodate it.

Despite having to learn to adjust to a new style of play, Lazarevic said, he enjoys playing on hard courts now.

“That was a significant change,” Lazarevic said. “It took me a while to adapt, but honestly I think hard courts style of play suits me better.”

In Serbia, tennis is a very popular sport, and the country constantly produces superstars, including Novak Djokovic, who is currently ranked No. 1 in the men’s single category by the Association of Tennis Professionals.

The Belgrade, Serbia, native began playing tennis at the age of 6 after his father exposed him to the sport. Lazarevic said his training was different from what players in the United States might experience.

“In Serbia, how it works is there are no school competitions,” Lazarevic said. “So, there are just tournaments that the tennis association organizes a couple of times a month.”

He said most of his practices were held at the local tennis courts and that he would train with other children from the city.

Lazarevic said he had always planned on coming to the United States for college and decided on the college after looking at multiple places.

“I was sure that I was going to get my higher degree in America, but where, exactly, I wasn’t sure,” Lazarevic said. “I was accepted to a bunch of different colleges, but they didn’t have tennis, so it would be a shame to stop abruptly because they didn’t have a team there.”

He has made an impact on the Bombers so far on the court and is currently in the doubles lineup, paired with junior Nathan Wolf. Their biggest win so far came March 14, when they defeated the team of freshmen Shane Dempsey and Clayton Smith from Shepherd University 8–2.

Wolf said Lazarevic and he work well together and that Lazarevic’s personality helps keep the duo motivated during matches.

“I think he’s a really good doubles partner because he stays really positive and has a really good energy on the court,” Wolf said. “He does a really good job keeping me excited. He’s a big part of the support system on and off the court.”

Lazarevic said it is difficult being away from his family, but having the tennis team helped him feel at home.

“Here, the nostalgia hits me. It’s a new experience, and new things are constantly happening,” Lazarevic said. “But when you’re starting off on a team, you instantly have a set group that made it a lot easier.”