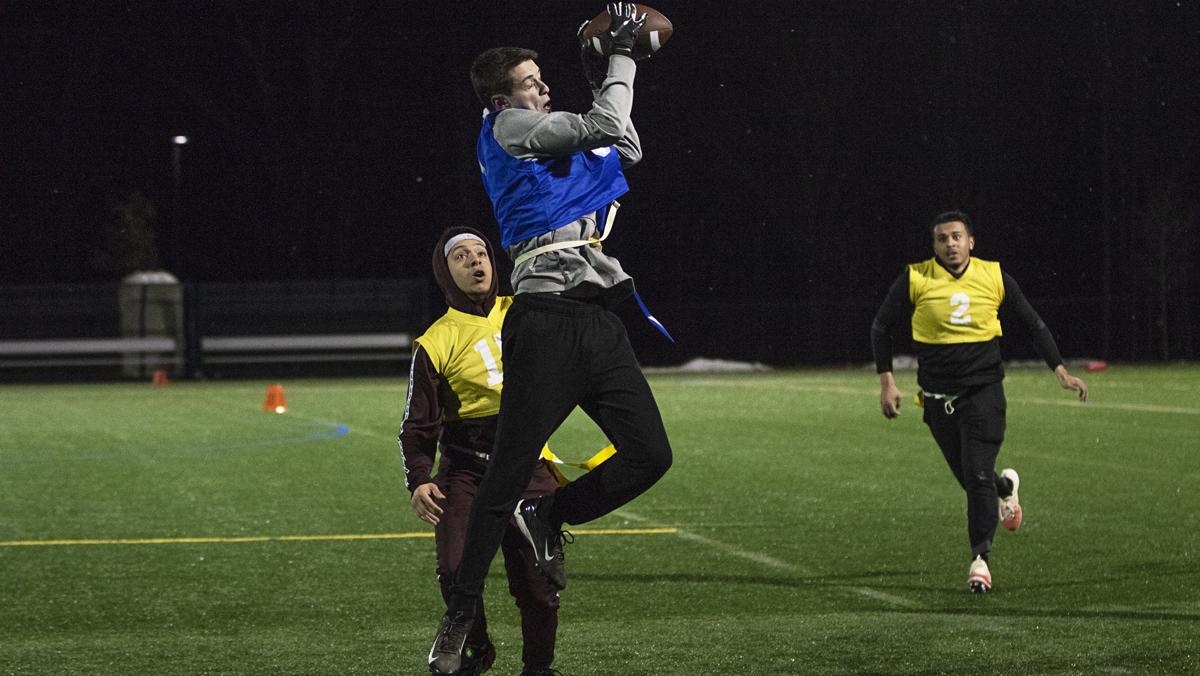 Six field players and a goalie grab their inner tubes and slip into the Kelsey Partridge Bird Natatorium pool as they prepare for a game of inner tube water polo. Competitors swim up and down the pool, inner tubes colliding like bumper cars, as each team splashes toward a victory.

Inner tube water polo is just one of several intramural activities offered at Ithaca College. There are three different types of athletic programs available for students to participate in at the college: Varsity, or Division III, club sports and intramural athletics. Intramurals are a relaxed alternative for students interested in continuing the sports they enjoy without the structure and time commitment of playing at the varsity or club level. Unlike intramurals, club sports still hold practices and travel for events. Intramurals only play other teams from within the college.

Love said these events have a low level of commitment and are meant to be fun. No matter what the activity is, practices are nonexistent, and games happen for one to two hours on one day a week, usually in the evening.

Sophomore Lee Folger joined his first intramural sport, 5v5 basketball, this semester. Similarly to Love, Folger said he has also had an enjoyable experience with intramurals.

Folger joined with a group of friends, some of whom were on a club team as well. However, Folger said this hardly affected them having a good time and they had competitive fun regardless.

“The team atmosphere is great,” Folger said. “I played with some good friends so it was going to be fun regardless. 2 of our teammates play on the club team and they had a little more at stake in some games because they were playing against their club teammates for bragging rights but for the most part we all just had a good time. We won a few games too which helped. We’re all competitive so I’m sure it could’ve gotten a bit tense if we hadn’t had any success.”

Even with low commitment, relaxed schedules and positive energy, the intramural program does face some challenges. Christopher McClure, assistant coordinator for recreational sports, said one of the biggest issues is finding usable spaces.

“We have a lack of facilities at Ithaca College and are fighting for space, so my director has a very difficult task,” McClure said, referring to Brad Buchanan, associate director of recreational sports. “He does a good job of coordinating around varsity because they get first pick, then club sports and intramural have to agree with one another on who gets the field when.”

McClure left the University of Buffalo to join the college as the spring semester was starting in January. He said it has been different, but a relaxing change coming from an intramural program with 5,000 students to one with approximately 500.

McClure said that the intramural program budget is set up differently than the varsity athletics department, because varsity sports require a larger budget to cover necessary costs such as staffing, uniforms and travel expenses.

The budget for intramural sports is also split between the club athletics program and the Fitness Center. If an important project is going on in the Fitness Center, then the budget is focused there. McClure’s colleagues then look at what is left after a project and decide how it will be used for both intramurals and club sports based on individual teams’ needs or McClure’s ideas for the two programs.

Most of the budget goes toward staffing and equipment for the Fitness Center, club sports and intramurals. Students are employed to be referees of many sports, and basic equipment like soccer balls or hockey nets needs to be provided.

“You might have 12 referees capable of being at a basketball game on any given night, but six of those could be physical therapy students who can’t make it because they need to study,” McClure said. “It also offers students a chance to make some money and gain skills. Basically, it breaks down to staff and equipment costs.”

Even though there are some issues within the program, athletes like Love and Folger have had positive experiences with the individual sports and the overall team atmosphere.

“My favorite part of being on an [intramural] team is just playing a sport I love with my friends without any of the real consequences for losing or not playing well,” Folger said. “At the end of the day, even though I’m competitive I know it’s just intramural. I’m not going to let a loss in an intramural game affect me negatively mentally.”

Correction: A previous version of the story stated that Chris McClure said that funding was an issue within the program. It has been updated to better reflect his explanation of the intramural budget. The story was also corrected to say that only students are employed as referees for intramural sports.