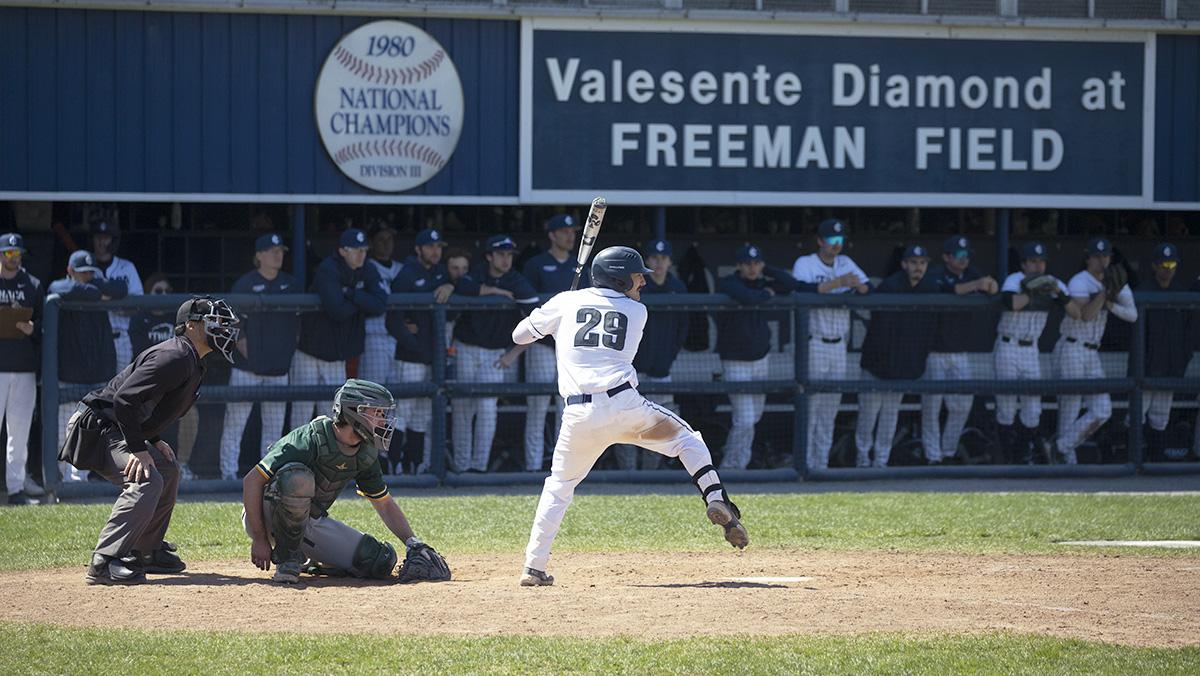 The Ithaca College baseball team defeated Clarkson University 7–3 on senior day at Freeman Field on May 1. The victory improves the Bombers’ record to 25–10 overall and 13–4 in Liberty League play.

Junior right fielder David Cifonelli led the Bombers on offense, going 2-for-4 at the plate with two RBI and a run scored. Cifonelli also picked up a stolen base in the contest.

Cifonelli said his performance was the product of putting in work throughout the season and seeing pitches well, and that he was proud of his performance.

“I saw the pitches well and just happened to have a good outcome,” Cifonelli said. “My swings have been coming along great lately, and today was a culmination of a lot of work. It’s taken a while, so it’s nice to see it finally pay off.”

The Bombers got on the board first, as sophomore left fielder Louis Fabbo scored from second base on an RBI single to center field by freshman designated hitter Nicholas Cutaia, making the score 1–0 Bombers. The South Hill squad tacked on another run in the first courtesy of a sacrifice fly to center field by junior third baseman Matt Fabian, which drove in senior first baseman Buzz Shirley to give the Bombers a 2–0 lead.

The South Hill squad added another run in the second inning on a sacrifice fly to centerfielder by Fabbo, which plated freshman second baseman Riley Brawdy, to make it a 3–0 Bombers lead.

After a scoreless third inning, the Bombers added to their lead in the fourth inning when Cifonelli hit a two-run double to the left-center field gap to give the South Hill Squad a 5–0 advantage. The Bombers kept rolling in the fourth, as Fabbo singled to left field, driving in Cifonelli and making the score 6–0 Bombers.

The Golden Knights’ offense threatened in the fifth inning, getting runners on first and third base with two outs, but freshman starting pitcher Colin Leyner got the Golden Knights’ leadoff hitter to lineout to center field, keeping the score at 6–0 Bombers. Leyner would pitch six innings on the mound, striking out six Golden Knights and earning the win.

The Golden Knights would strike in the sixth inning as the club capitalized on a double to left field, which drove in a run and made the score 6–1 in favor of the South Hill squad. Leyner was able to get out of the inning allowing just the one run.

The Golden Knights continued to narrow the Bombers’ lead in the seventh inning, as a ground-rule double to left field scored a run making it a 6–2 game, and an RBI groundout to second base scored another run in favor of the Golden Knights, making the score 6–3 Bombers.

The college added to its lead in the eighth inning after Brawdy scored from second on a pinch-hit single to shallow center field by sophomore center fielder Colin Shashaty, which widened the gap to 7–3 Bombers.

Graduate student pitcher Brett Budzak secured the Bombers victory by working a scoreless ninth inning, striking out a pair of batters. Head coach David Valesente said he was impressed with the way the hurler and the rest of the senior class performed in the contest.

“I thought they all contributed great, we were able to get them all into the game,” Valesente said. “We had a couple of base hits from [senior outfielder Jason] Sarubbi and [senior infielder Timmy] MacDonald and Budzak came in to close the game. It was great to get them all in there, we couldn’t have drawn it up any better.”

The Bombers will end the regular season with a game at home against Alfred State College on May 3 before hosting Liberty League crossover series starting on May 7 against Union College.