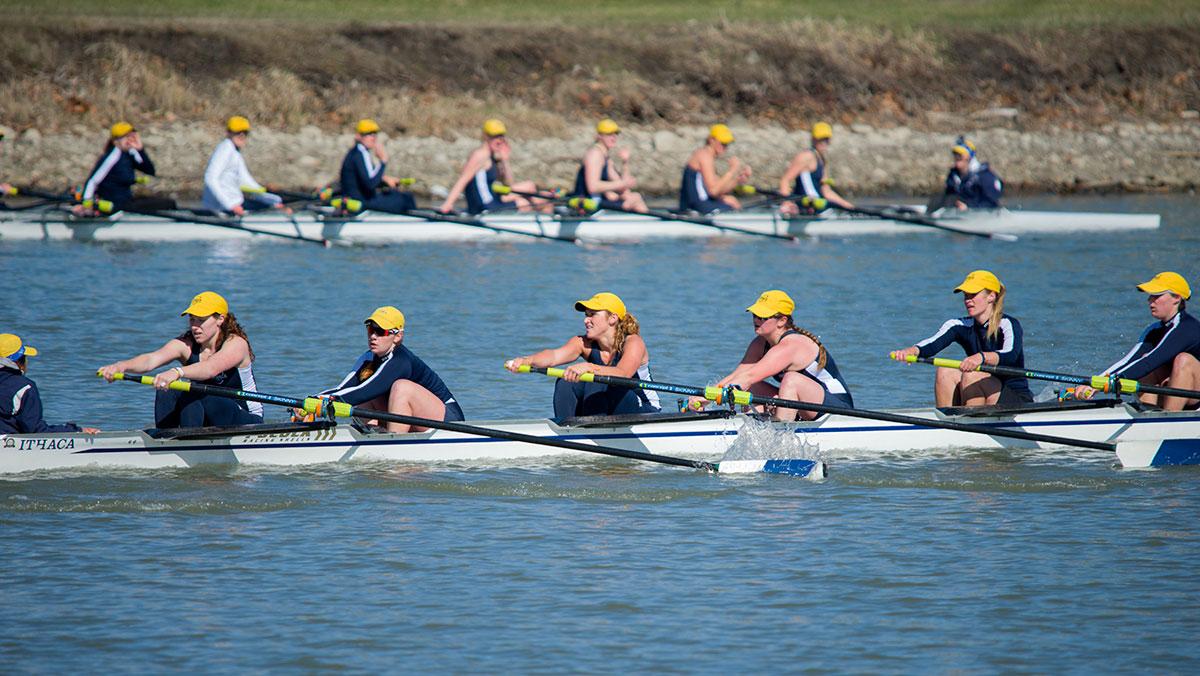 The men’s and women’s rowing teams competed in their spring home opener March 26 at the Cayuga Inlet. With ideal rowing weather of sunny skies and little wind, the teams began their season off with multiple first-place finishes.

The day before the regatta, the teams faced harsh training conditions, with overcast skies, wind and cold temperatures hampering their training. Despite this, junior John Posca said the team worked hard to get past the bad training day and focus on the race.

“Yesterday was s—ty, but our coxswain said that if you have a s—ty practice the day before a race, it probably means you’re going to do pretty well,” Posca said. “We did mental exercises yesterday and this morning, so we had a good mindset that helped us forget about yesterday’s practice and start fresh today.”

The men’s varsity four boat raced Michigan and came out with a victory. The team defeated the Wolverines by 16 seconds after falling behind early in the race.

Posca said the race was a good come-from-behind win for the team after it was put in the more difficult racing lane.

“There was one point on the race course where you’re at a bit of a disadvantage if you’re in lane three because there is a small turn,” Posca said. “They were in lane two, so they had a slight advantage right after the bridges, but we were able to hold them off and pull ahead.”

The men’s varsity four also picked up a first-place finish in the afternoon session, defeating Cornell.

After maintaining the same pace as Hobart for the first 750 meters, the men’s varsity eight boat could not keep up. Ultimately, they fell behind and lost by 19 seconds.

Head coach Dan Robinson said the team knew it was going to be a tough race before entering the water.

“It was the fastest opponent we’ll face until our final championship, so in that regard we did worse than we thought we were going to do,” Robinson said.

Meanwhile on the women’s side, the Bombers swept all six events to take the win. The varsity eight had a strong showing overall, defeating William Smith by 12 seconds in the first heat and by 28 in the second heat.

The women’s novice four boat had only been practicing for two days together, and freshman Rachel Smullen said this made them a little tentative heading into their race.

“I was definitely a little nervous,” Smullen said. “But we had a solid race plan, and the two practices we did have had gone pretty well. I think the nerves were a good thing because they gave us all the extra energy boost we needed.”

The Bombers will host Rochester Institute of Technology and Rochester University at 11 a.m. April 2 at the Cayuga Inlet.