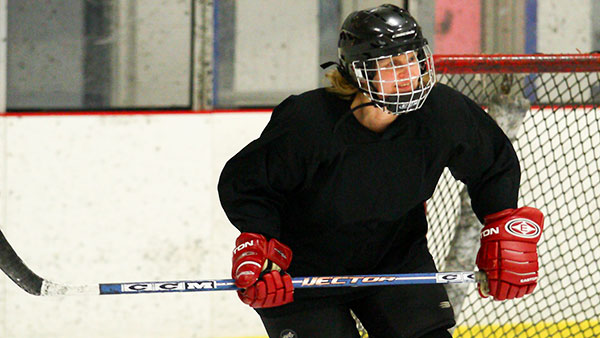 She is driving to the Chenango Ice Rink, where she plays in a men’s hockey league. Each week, Kittredge matches up with men who are physically bigger, faster and stronger than she is. But that hasn’t stopped her for the 22 years she has been playing in Binghamton, just as it won’t stop her this Saturday night.

Kittredge’s extreme dedication to the sport stems from long hours in her childhood backyard, kicking a soccer ball around with her four younger siblings. Without other athletic opportunities, it was there that she discovered a passion for sport.

“When I was growing up … [women] couldn’t play interscholastic sports,” she said. “I had been exposed to soccer when one of my elementary school teachers, who was from Germany, had us play in his class, and I loved it.”

Kittredge enters the arena and begins putting on her hockey gear. She laces up her skates and dons her pads, helmet and gloves that will serve as her only protection on the ice. The gear fits her snugly and will save her body from the bulk of the hits it will absorb during the game.

There was a time, though, when Kittredge did not have the protective equipment she needed. As a student at Hamilton College in the late 1970s and early 1980s, she played on both the club ice hockey and soccer teams, but her teams were never given adequate gear or facilities with which to play.

“Title IX was just coming into effect, so they had to have women’s teams, but they weren’t really going to put any money into it,” she said.

She played ice hockey during her first 2 1/2 years of college, where her teammates used the oversized junior varsity men’s equipment and didn’t have their own gloves until a teammate’s father bought a pair for each player.

Soccer was no better. Without practice facilities, her team used the recently discarded junior varsity lacrosse field, where Kittredge tore her groin because of the slippery and dangerous field conditions.

Hamilton College finally promoted its women’s soccer team to varsity in 1982, prior to Kittredge’s senior year. Because she was the only senior on the team that year, she became the first female soccer player to graduate from Hamilton.

In the 25 years she has since spent at the college, Kittredge has centered her classes around feminism and the role of females in literature. Additionally, she has taught classes such as Survey of Science Fiction and Introduction to Children’s Literature.

More than three decades after graduating from Hamilton, Kittredge is still a trailblazer for women in sport as one of just two females in the adult hockey league in Binghamton. After she finishes putting on her gear, she skates onto the familiar Chenango ice.

When the game is about to begin, Kittredge, who primarily plays defense, lines up around center ice, jostling for position with another player. She embraces the contact — she remembers times when her male counterparts were hesitant to touch her during games.

“Whenever I’d start with a new group of men, there would be this bubble period where no one would get near me,” she said. “Then they’d realize that I was going to take the puck away from them if they gave me all that space.”

Kittredge has been playing in adult hockey leagues since she was 31 years old, 12 years after she graduated from Hamilton. Hockey helped Kittredge deal with the post-partum depression she experienced after the birth of her son. She has often switched leagues as teams come and go, but said the way she is initially treated is always the same.

“There was kind of a hazing period where guys would beat me up because they wanted to get me scared,” she said. “They didn’t want their space invaded by a woman. I would just absorb it and do my job, and over the years I won a certain level of respect.”

Her teammates and coaches noticed her persistence. Dave Baycura, who coached Kittredge in an adult league for almost seven years, said her work ethic and intelligence helped compensate for her physical size.

“She didn’t back down,” Baycura said. “She tried to be as competitive as she could and got better and better.”

But while Kittredge’s drive helped her become a more competitive athlete, it also has contributed to the many injuries she has faced. The biggest of these was a concussion she received on Feb. 24, 2007, when she fell over an opponent’s legs and the back of her head collided with another player’s stick as he was winding up for a slapshot.

The concussion was Kittredge’s fifth in her athletic career and was by far the worst one she had experienced. It triggered post-concussion syndrome, which caused memory loss and depression.

“I don’t really remember 11 months of my life after that,” she said.

After the concussion, Kittredge stopped playing hockey because her doctors cited her high risk for early dementia, which is common among athletes who have experienced extensive head trauma.

After five years without hockey, Kittredge decided she could not stay away from the game any longer.

“I looked around and said, ‘Well, if I had early dementia, I’d be getting it in my fifties,’ and I wasn’t,” she said.

Even after her injuries, hockey has provided an important outlet for Kittredge. She said her ability to balance the sport with her classes has increased her passion for both.

“For me, the athletics balances out with the teaching,” she said. “Because my ego isn’t all caught up in teaching, it allows me to be a lot more laid back in the classroom.”

She has used her story to inspire those around her as well. In addition to her English classes, she taught a freshman seminar entitled “Experiencing College Athletics,” which helped incoming first-year athletes adjust to college life. Her story has also been recognized nationally, as she was featured in author Erica Rand’s book, “Red Nails, Black Skates.”

“She breaks [the cultural norm] simply by challenging the idea that gender segregation is required for sport,” Rand said.

Now, Kittredge plays in a somewhat safer league. She is still able to make hockey a regular part of her life but also plays with athletes who are more safety-conscious.

Since she began playing again, Kittredge has sustained two more concussions for a total of seven. Now, even minor contact to her head has the potential to trigger a concussion.

Yet, Kittredge continues to play hockey. The fluidity and improvisation of the game appeal to her.

“I like the feeling that you have to be totally focused on the things around you,” she said.

After her Saturday night game, which has lasted about an hour, Kittredge removes her gear and drives back to Ithaca.

Her unwavering passion for the game has gotten her through 22 years of playing against men in one of the most contact-heavy sports. She has experienced injury and hazing, but she has earned respect from her once-wary teammates; she wouldn’t have it any other way.

“What playing with the men gives me is that I can make hockey a daily part of my life,” she said. “I used to play with the highest level I could find. I would skate with guys who were former pros, people who were 20 years younger than me. Now, I play only with people who are less serious about winning the game as they are about not hurting themselves. If somebody has a choice between taking somebody out or scoring a goal, they will take care of the other players. That’s the bottom line for me.”