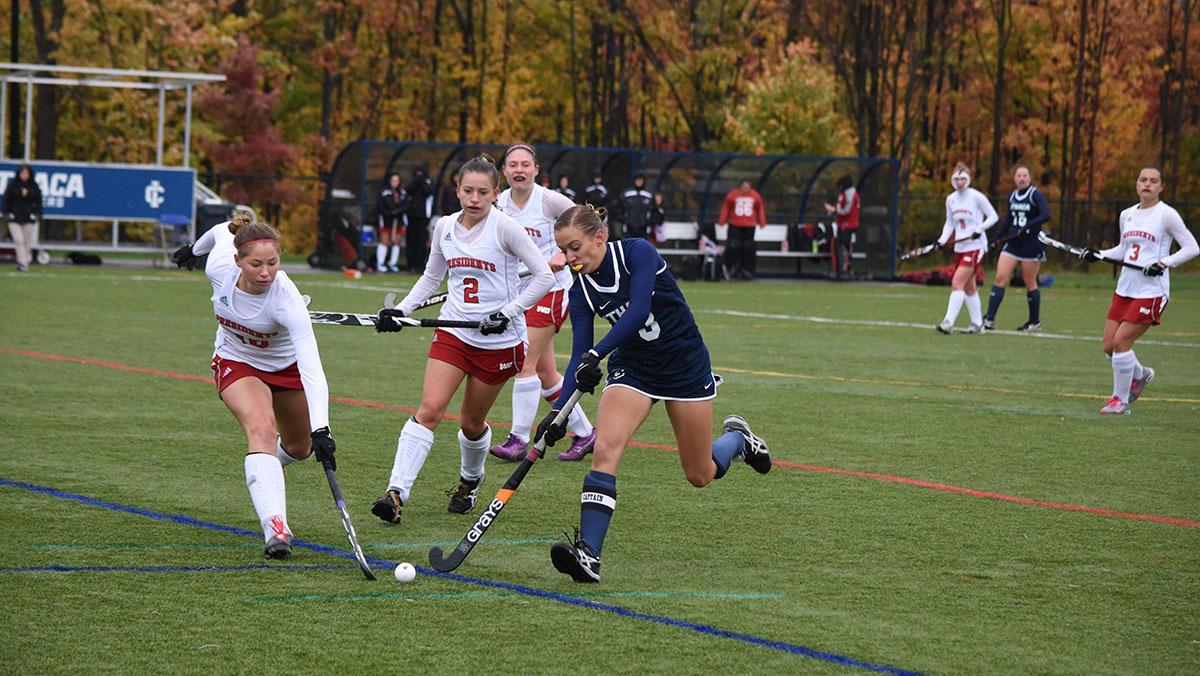 On Ithaca College’s senior day, Oct. 22, the field hockey team hosted Washington and Jefferson College. The Bombers defeated the Presidents by a score of 3–1, moving to 6–7 overall.

During a cold, windy and rainy afternoon the Ithaca College seniors played their final game at Higgins Stadium.

The game began slowly, with both teams sharing possession of the ball for the first 10 minutes. Both teams were playing aggressive defense, making any sort of scoring opportunity difficult to come by. Fifteen minutes into the opening half, the Presidents were given the first penalty corner of the game, but the chance was thwarted by the Bombers’ defense.

The beginning of the second half saw more saves by Lass. With 22 minutes remaining in the second half, the Bombers were awarded another penalty corner. The short corner led to the first goal of the game by freshman Kendall Keil. The assist was awarded to senior Colleen Keegan-Twombly.

The goal by Keil opened the floodgates for the Bombers. With 13 minutes and 43 seconds remaining in the game, a drive by Keegan-Twombly was deflected by a defender, but junior Michaela Donohue was there to recover the ball and put in in the back of the net to make the score 2–0.

Just seconds after her goal, Donohue dribbled up the sideline, and centered the ball in front of the opposing goal. Keegan-Twombly was there to finish to put the Bombers up 3–0.

Washington and Jefferson sophomore Laura O’Malley scored a late goal for the Presidents, solidifying a final score of 3–1.

Keegan-Twombly said she was motivated to win on senior day.

“It’s amazing,” Keegan-Twombly said. “We worked really hard for these four years. To be a big part and to get such a good win, it really meant a lot. We really came out here with the mindset: this is it, this is our last 70 minutes and we’re going to make sure we crush it.”

Head coach Tracey Houk was pleased with her team’s performance in the wake of a few straight losses.

“We’ve had a couple games that we struggled with,” Houk said. “We just didn’t play like ourselves in the last game. It’s nice to come back home to our own style and play our game, and it’s nice to get rewarded with a win for that.”

The Bombers will face off against the SUNY Brockport Golden Eagles at 4 p.m. Oct. 25 in Brockport, New York.