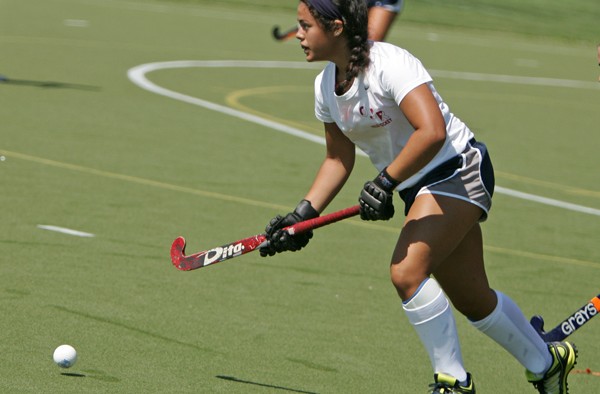 After a season of difficult losses, the field hockey team is aiming to foster a culture of enthusiasm and teamwork to lift the squad to the top of the 2012 Empire 8 Conference standings.

Head Coach Tracey Houk said she anticipates that the freshmen will feed off of the team unity found among the upperclassmen, which will propel them in the right direction for the season.

“We have established great team unity with our returning players, so that gives us a great foundation to work on,” Houk said. “And with our freshmen, we plan to update them on our expectations so they can grow off of the foundation we have for both skill and team unity.”

The South Hill squad finished 5–11 last season, and seven of those losses occurred by a one-goal deficit for the Bombers. The season’s toughest defeat came in early October after a 1-0 overtime loss to Washington and Jefferson College.

While the South Hill squad finished with a losing record, they had the pieces in place to have a successful year. Junior Lindsay Flanagan said last season’s record does not reflect the team’s talent.

“Last season, our record did not do us justice because we were outplaying a lot of the other teams, but we just couldn’t finish in the circle,” Flanagan said. “But we saw a lot of improvement from last season during our spring season, especially from our younger girls, so I think we are going to have a strong season.”

In addition to some tough losses, the team also must deal with the departure of some key contributors including JulieAnne Butare ’12, Jessica Dillon ’12 and Heather Kozimor ’12. Houk said the return of Kozimor and Butare as assistant coaches along with several starters, such as senior goalie Kelly Singleton, makes her confident they can still produce a great season.

“It is a solid group,” Houk said. “They are all positive, focused, and on the same page, so I can expect things from every single one of the players coming back.”

The team is enthusiastic that their close-knit team will propel them to success. During the summer, the athletes traveled to Bermuda for a week where they competed against teams from around the United States.

Junior Andrea Pace said the team bonding greatly contributed to the Blue and Gold’s success on the field, and she said she is hopeful this will translate into a winning record for her squad.

“When we actually played in the games, I felt really strong, and it made me really excited for the upcoming season,” Pace said. “We have such a great time off the field, and then when we got on the field our communication was great, our passing was great.”

Along with this trip, the team also went camping in August to allow the incoming freshmen to get to know the upperclassmen.

Houk said she hopes the trips enhanced camaraderie among these girls to uncover ways to advance their skills for the upcoming season like she has done with teams in the past.

“Number one, we want to focus on getting along as a team and focus on working hard together,” Houk said. “We also want to improve daily in anything we are working on whether it be our skills, team bonding, or whatever we are trying to improve on, so we want use this time to update the team on our expectations.”

The Bombers will open their season Aug. 31 at Higgins Stadium against Wells College. While Houk said the season will require hard work and dedication from her players to ensure their anticipated success, she is eager to see how the season will come together.

“Every season is new, so it’s always exciting to see where everyone fits in and how they contribute,” Houk said. “The exciting thing about coaching is that it’s never the same year, so we always have a new element to add and then we have to put it together and we plan to make it work.”