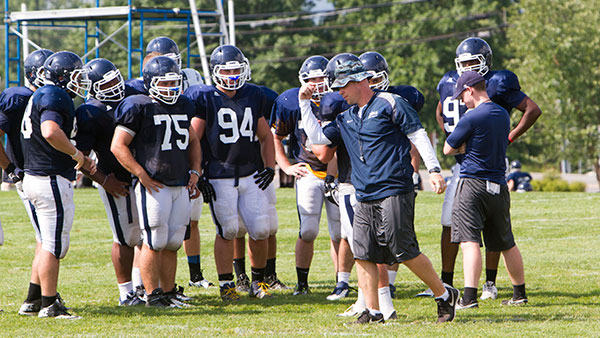 Mark McDonough’s status within the Bombers football program has continued to rise ever since he joined as its defensive coordinator in 2011. Under McDonough’s guidance, the team’s defense has established itself as one of the best in Division III, finishing in the top 50 in the nation in three categories. The defense’s rise has not only earned McDonough praise but an opportunity to return to USA Football in a coaching position.

Over the summer, McDonough served as the linebackers coach for the United States Under-19 National Team that won the International Federation of Football U-19 World Championships on July 16 in Kuwait. This was his first involvement in international football since he competed on the Division III All-Star Team against the Mexican National Team in the 2001 Aztec Bowl, shortly after he had helped the Bombers reach the NCAA Tournament Quarterfinals. His experience as a player allowed him to form a connection that would eventually lead to the opportunity to coach the Americans.

“The general manager of the national team, [Tom Bell], was the general manager in charge of the team that I played on in the Aztec Bowl,” McDonough said. “He remembered me as a player from then and contacted me to see if I was interested in coaching.”

McDonough was part of a defensive coaching staff that comprised four collegiate defensive coordinators, each specializing in a particular unit. Naturally, the former Bomber and All-American linebacker chose to work with the linebackers. McDonough likened the coaching experience with the national team to his regular duties with the Blue and Gold. He reviewed questionnaires and game tape from numerous high school seniors and college freshmen before settling on six linebackers to take to Virginia for a short training camp with the full squad in late June.

McDonough said the national team’s ability to come together in that camp was the main reason they were able to win the tournament.

“Just like here [in Ithaca], you see kids from different walks of life and different parts of the country come together and grow,” McDonough said. “We grew through double sessions and all that kind of stuff. By the time we got on the plane a week later, we were a tight group, and it’s part of the reason why I think we were successful.”

The USA won each of its games by at least 23 points and only trailed once during the entire tournament. Though the team had little difficulty winning the tournament, it had to play every game at night. Some games kicked off at 11 p.m., because the average high temperature for a day in July in Kuwait is about 116 degrees Fahrenheit.

With the average low in Kuwait being about 85 degrees Fahrenheit, higher than the average high in Ithaca, McDonough said the weather was the toughest thing to deal with in Kuwait.

“It was like stepping into an oven,” McDonough said. “The air conditioning in the airport was great, but once you step out, it’s like getting hit in the face with a hot iron. It’s different than here [in Ithaca] because of the general coolness in the air here when it’s 80 degrees and the sun that’s hot. There’s no coolness in the air [in Kuwait]; it’s just hot.”

Since the squad stayed in the same hotel as the three other teams in its group, McDonough was able to interact with the coaching staffs of those teams, which are all still tasked with developing the sport in their respective countries. McDonough noted the amount of discipline the Japanese coaching staff tried to instill with their players, and the improvement with the Mexican national team from 2001 to now.

He told the coaching staffs he met with to empathize their national pride while working with their respective players. USA head coach Aaron Brady noted McDonough’s own pride while he watched McDonough work with the Americans.

“He spoke to the team about what it meant to represent the USA,” Brady said in an email. “It was an inspiring talk and definitely pumped up everyone in the room, including our [public relations] guy and the trainer.”

Though he will be leading a completely revamped defensive unit from last season, he will also be working with seniors who arrived in South Hill at the same time he did. Senior linebacker Chris Williams said his relationship with McDonough has blossomed over the years.

“[McDonough] knows what he’s talking about,” Williams said. “He wants the best for us and expects the most out of us. That just spreads throughout all of us.”

“To be honest, I don’t really know, don’t really care,” McDonough said. “I’m focused on being the best we could possibly be. I’m not interested [in any other job]. Ithaca’s great, the best place on the planet as far as I’m concerned.”