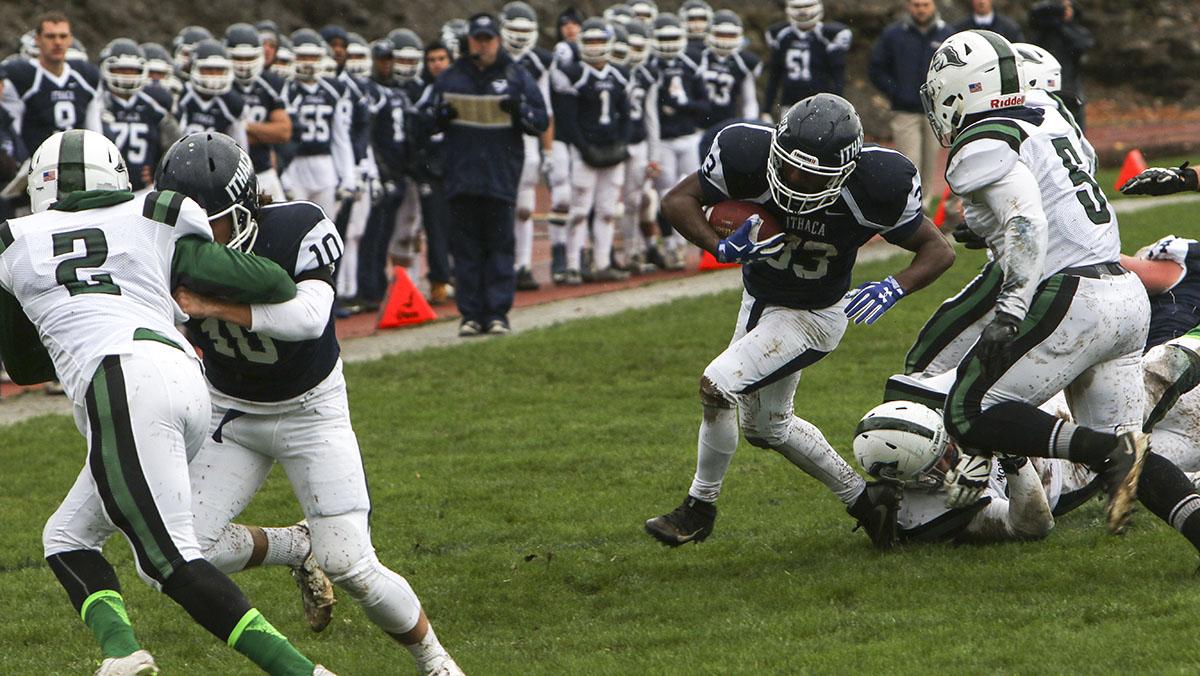 The Ithaca College football team defeated Morrisville State College 34–0 Oct. 22 at Butterfield Stadium. The Bombers are now 4–3 on the season and 4–0 at home.

The Bombers began the game strong, scoring two touchdowns on their first two drives.  On their first drive, the Bombers moved 63 yards and found the end zone on a seven-yard pass from senior quarterback Wolfgang Shafer to junior wide receiver JR Zazzara.  After forcing a three and out, Shafer connected with Zazzara on the first play of their second drive for a 53-yard touchdown.

The game was scoreless for the remainder of the first half. The South Hill squad’s offense slowed down in the second quarter because Shafer left the game after taking a hit on an eight-yard run and would not return. He was later diagnosed with a concussion and received 12 stitches in his chin.  Junior quarterback Adam Fron entered the game in his place.

Head coach Mike Welch said he does not expect to see many changes in the offense if Shafer is unable to play next week.

“Adam knows the offense and is a capable player,” Welch said. “Outside of a few wrinkles, I don’t think anything is going to change in the way we run our offense.”

Fron said he was prepared and ready to finish the game in Wolfgang’s place.

“This isn’t the first time I’ve had to go in so I knew what to expect,” Fron said.  “I trust my teammates and they trust me so I wasn’t worried about anything.”

The third quarter featured one touchdown, when junior running back Dan Porter crossed into the endzone on a two-yard run for the Bombers third score of the game.

The Blue and Gold put the game away on the first play of the fourth quarter, when Fron found freshman wide receiver Will Gladney for a 24-yard touchdown. The Bombers forced a three and out on the following drive for the Mustangs, and then junior Jordan Schemm returned Jeff Groth’s punt 60-yards for a touchdown to conclude the game.

This was the first time the Bombers have shutout a team since Nov. 2, 2013, when they beat Frostburg State 23–0.

Coming off of a loss in their last game Oct. 15 against SUNY Brockport in which they allowed 42 points, senior safety Skyler Kauf said the defense’s success today, which included five forced turnovers, was all about execution.

“You don’t shutout teams very often and for us it doesn’t matter who we’re playing it just comes down to us playing the way we know we can,” Kauf said.

Welch said the defense was motivated after its poor performance against Brockport.

“We didn’t play out defense last week, and the guys were determined to turn that around and they did,” Welch said.

Zazzara led the way for the Bombers’ offense with five receptions for 101 yards and two touchdowns. He now has eight touchdowns on the season, and Welch said the transfer wide receiver has been an important addition to the team.

“He’s an explosive player and he has really started to mesh with our offense,” Welch said.

The Bombers will return to action at 1 p.m. Oct. 29 in Rochester, New York to take on St. John Fisher College.