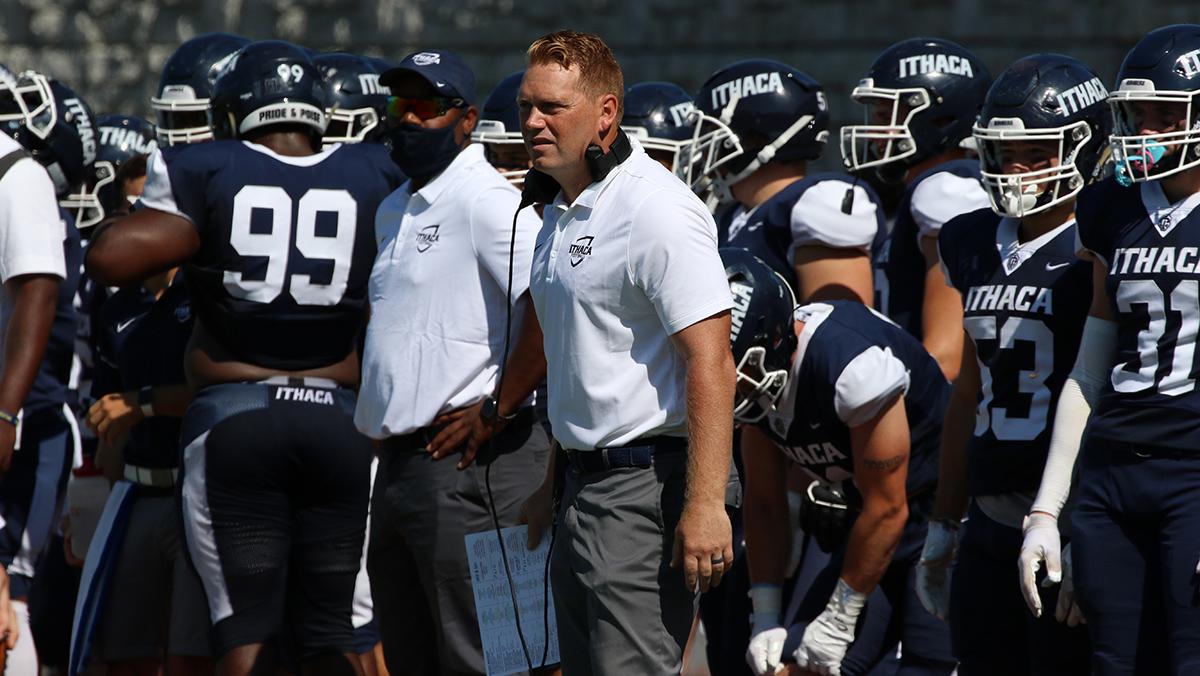 Ithaca College head coach Dan Swanstrom has left the football program to become the offensive coordinator for the University of Pennsylvania.

A Jan. 24 announcement from Ithaca College stated that Swanstrom’s final day with the team was Jan. 31 and he began his new role Feb. 1. He is returning to the university he coached for prior to becoming the Bombers’ 10th head coach in program history. Swanstrom was the quarterbacks’ coach and recruiting coordinator for the Quakers from 2014 to 2016. The coach led the Bombers to a 32–11 record and a .744 winning percentage during his four seasons on South Hill. This is the best mark in program history, ahead of Jim Butterfield’s .743 winning percentage in 27 years on the sidelines.

“I can’t put into words how special my time at Ithaca has been,” Swanstrom said in the announcement. “I would like to thank the players, coaches and fans for the cherished experiences and the meaningful relationships.”

Swanstrom did not respond to multiple interview requests from The Ithacan.

Susan Bassett, associate vice president and director of the Office of Intercollegiate Athletics, said she was impressed with Swanstrom’s abilities as a coach and is appreciative of the impact he had on the program.

“I commend him and thank him for the professionalism he brought to his approach to coaching and being an educator,” Bassett said. “I think the impact he’s had on the program in terms of the quality athletes that he recruited, and the exceptional coaches he attracted to come and work with him in the program go to the depths of character and substance that he brought to his work.”

The statement said the college will hold an “immediate national search” for its next head football coach and that current assistant coach Mike Hatcher will be the interim head coach until the hire is made. Hatcher declined an interview request from The Ithacan.

Bassett said Swanstrom notified her that his former team had expressed interest in his return to the University of Pennsylvania in late December 2021. She said Swanstrom has been transparent throughout the process, allowing the college to prepare for his departure. Bassett said she is currently putting together the search committee, which will include alumni, faculty and staff, and starting the search process.

“We already have a great number of candidates who have applied and others who have reached out,” Bassett said. “So I know that we’re going to have a very deep and talented applicant pool with coaches from Division I, II and III. And in that mix are some Ithaca College graduates, which we welcome.”

Despite losing their head coach, junior wide receiver Julien Deumaga said he has not heard talk of players looking to transfer out of the program.

“There are definitely not talks [of transferring] in direct relation to Coach [Swanstrom] leaving,” Deumaga said. “Nobody’s jumping ship.”

Prior to Swanstrom’s four seasons at the helm, the Bombers had just two head coaches for 50 years. Butterfield manned the sidelines from 1967 to 1993 and Mike Welch led the program from 1994 to 2016. Bassett said the college is committed to hiring a head coach that they believe is best suited to help the program preserve its tradition of success.

“We’re looking for a professional coach, an educator who espouses Bomber values of respect, integrity, sportsmanship and a commitment to academic and athletic achievements,” Bassett said. “And we, of course, want someone with a proven track record of success in college coaching, excellent knowledge of the game, high energy, excellent work ethic and excellent communication skills.”

Swanstrom displayed these qualities during his tenure, guiding the Bombers to eight victories in each of his four seasons. The squad also posted a 17–5 Liberty League record with Swanstrom at the helm. Junior quarterback A.J. Wingfield said the team is sad to see Swanstrom go, but they understand that it was a business decision.

“As a team, there are no hard feelings. It’s part of the business, and we understand that,” Wingfield said. “He taught us everything that he could have taught us. And now that we have that, I mean, we’re the ones on the field. We know that we’re the culture.”

Deumaga echoed Wingfield’s praise for their former coach, calling him the smartest coach he has ever played for. He added that, while it was sad for the team to lose a figure they respected so much, they are ready to look toward the future and prepare for next season, regardless of who the next coach is.

“I’m excited for what’s in store for our program, for what our future looks like,” Deumaga said. “It’s going to be weird with a new coach at the head, but I think that we’re talented enough that we’re going to be pretty successful, no matter who’s coaching us.”

For the time being, Wingfield said the team is rallying around Hatcher and the interim head coach is stepping up to the occasion well.

“Coach Hatcher was there at six in the morning [the day after the announcement] and he was the first guy to say anything,” Wingfield said. “He told us, like, ‘Listen, it is what it is, we gotta move forward. It happens. It’s a business, and this isn’t going to change us,’ and he totally took charge. We respect Coach Hatcher just as much as anybody.”

Bassett said she believes whoever the college hires will be a great fit for the program. While she said she wants to hire someone soon, there will be a thorough process.

“I am supremely confident that we are going to find a phenomenal leader for our football head coach position,” Bassett said. “We will work with attention to detail and efficiency with the goal of naming our new head coach as soon as possible.”