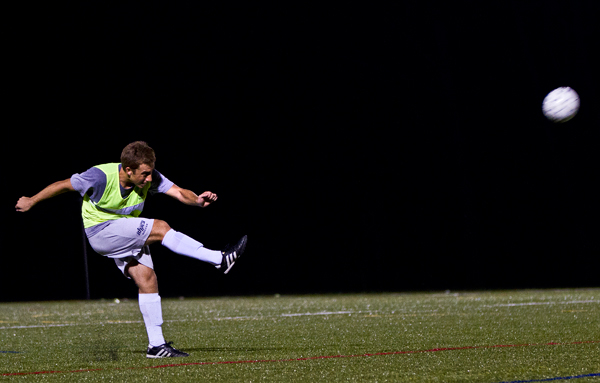 After ending last season with a 4-10-1 overall record and allowing in the most goals in a decade, the men’s soccer team will look to their veterans to build a more cohesive unit, beginning from the back line.

The defense took a step back last season when the Bombers allowed 25 goals, including 10 in the first three games. After that rough start, the Blue and Gold were able to improve as the defensive unit built its chemistry. The South Hill squad lost to St. Lawrence University, the top-ranked team in the country at the time, by a 4-0 score Sept. 25, but then did not allow more than two goals in the last eight matches of the regular season. However, 2011 marked the first time in 10 years that the Blue and Gold allowed opponents to score 20 or more goals.

Head Coach Andy Byrne returned for his 28th season and selected seniors Ryan Norland and brothers Dan Shirley and Jack Shirley to captain the team. Currently, Byrne said, Norland and Dan will play back defense while Jack will be playing defensive midfielder. Byrne said inexperience and strength of schedule were factors in the team’s defensive setbacks.

“We played teams that were good, and sometimes that happens to you, but you hope that through that experience of playing good teams you’ll get better through the course of the season,” Byrne said.

Jack Shirley said the South Hill squad needs to have a greater mental awareness from the first kick to the final whistle.

“Our defense played very well at times, but sometimes we became unfocused,” Jack said.  “We weren’t focusing on the unit in the back. We were focusing on getting the ball up the field and scoring a goal rather than staying tight in the back and being astute.”

With 23 underclassmen and 17 freshmen on the roster last year, the team’s youth became evident during close contests. In the Bombers’ last regular season game against the Elmira Soaring Eagles, sophomore midfielder Tim Goldman was able to give IC the lead after 83 scoreless minutes. The Blue and Gold then gave up two goals in the last five minutes to lose the match.

“It definitely helps to have experience,” Norland said. “College ball is different than high school or even club. Everything is just quicker.”

Dan said having the three captains leading from the back line is an invaluable advantage for the Bombers this season. Goldman said the senior captains look solid on defense and are leading by example.

This year’s schedule will be competitive, featuring top regionally ranked teams like Hobart College, Rochester Institute of Technology and Brandeis University. Byrne said he creates a challenging non-conference schedule because he wants to play against the best teams to help prepare the squad for the Empire 8.

“When you’re able to play good teams like that, they show you the things you need to work on and get better at,” Byrne said. “It forces you to play at a higher level. You have to play faster, defend better, whatever it is. We paid some prices for it, but down the road it made us tough in those competitive conference games.”

With more than half the team coming off a postseason run last season, the Bombers will look to translate experience into a strong start in their opening match Sept. 1 against Brandeis University in the Keene State Tournament in Keene, N.H.