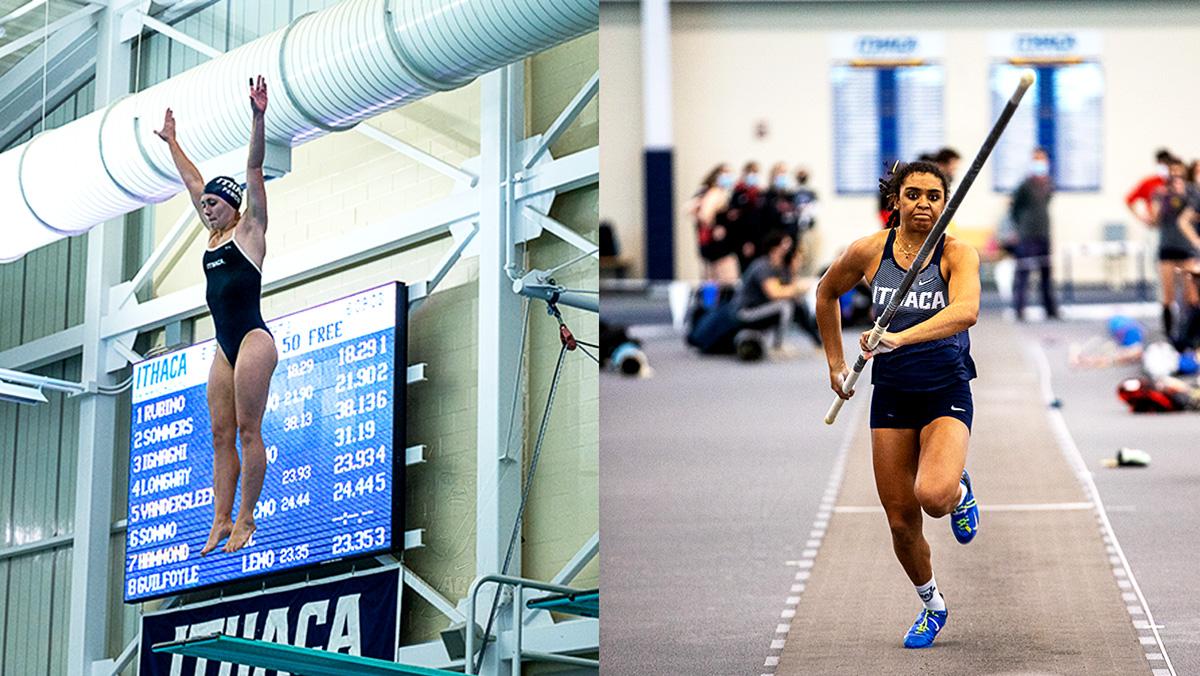 Each season, teams across the Liberty League set out to bring home a Liberty League title. Two Ithaca College athletics programs reached the top of the conference this winter, posting Liberty League Championships for the college’s women’s swimming and diving and women’s track and field teams.

The men’s teams also came in second place for both programs. Coming into the season, the coaching staffs on each team held high goals for their respective teams, with the ultimate goal of winning the conference being the main expectation. But Mike Blakely-Armitage, men’s and women’s swimming and diving assistant coach, said the coaches had to set different expectations for both teams.

“We wanted to win a championship, which is what we did with the women,” Blakely-Armitage said. “I think we have two very different teams in the men’s team and the women’s team, and I think that was a challenge making sure that as a coaching staff, we have separate goals for each program.”

Jennifer Potter, women’s track and field head coach, has seen success at the college, winning 14 consecutive conference championships for the indoor team, including all four since joining the Liberty League in 2017, after being a member of the Empire 8 conference.

Her goal was for the team to win a championship, but she recognized the high level of competition it would face this year, especially the University of Rochester, which finished 65.5 points behind the Bombers in second place.

“It was the goal to win,” Potter said. “Rochester is strong, so I thought it was going to be closer than it has been. But our team always rises to the occasion. We’re a postseason program, so a lot of things tend to happen at the start of our postseason, and so I knew we could win.”

Logan Bruce, senior on the women’s track and field team, said hosting the championships allowed for the track team to feel more comfortable by playing off of the fans. That comfort created a special environment for the team and for the athletes, which helped to energize the group.

“The atmosphere was magical, there was so much energy within the team and from our fans,” Bruce said. “Everyone knows that it’s a great team atmosphere and brings energy whether they are competing or not. Almost every event had multiple Ithaca athletes, which allowed us to compete with our teammates and represent [Ithaca College] together.”

In competition, the athletes on both the track and field and swimming and diving teams worked to meet the goals that their coaches set out for them. Following the conclusion of the conference championships, two members of the men’s swim team won conference awards. Sophomore swimmer Jack Wadsworth was named Liberty League Men’s Swimmer of the Year and sophomore James Collishaw ended the year as the Liberty League Men’s Rookie of the Year.

Rounding out the personal accolades, Collishaw won the conference’s award for Rookie of the Year as a sophomore due to the extra year of freshman eligibility given to NCAA athletes because of the COVID-19 pandemic. Collishaw qualified for the NCAA Swimming and Diving Championships and is set to compete in the event beginning March 16. Going into next year, he said he wants to enjoy the emotion of winning the award and turn that into positive energy during the season.

“I kind of want to ride that high,” Collishaw said. “I loved getting that award and it really motivated me a lot. So just trying to keep the energy high and keep my mindset good. Pretty much just riding the high from this meet and carrying it into the next season.”

On the women’s team, graduate student Ava Lowell was named Liberty League Women’s Diver of the Year. For both coaching staffs, the success of their athletes sits as a tribute to what they want to see in the program.

“I know the diving coach [Chris Griffin] is really proud of the accomplishments of Ava, and we’re really proud of what Jack is able to accomplish and what we set out to do,” Blakely-Armitage said. “I think those two athletes epitomize what we hope in those ideals is that they’re going to push the envelope both athletically and academically. It just means a lot.”

On the track, an athlete that found success in the conference championships was Bruce. She won the 60-meter hurdles in a close battle, finishing just 0.15 seconds ahead of the runner-up by posting a time of 8.95 seconds.

Bruce also competed in the 60-meter dash, finishing in fifth place with a time of 8.01 seconds, as well as finishing fifth in the high jump with a mark of 1.53 meters. While Bruce said it felt good to perform well personally, the victory in the hurdles was more special for the 10 points it gave to the team.

“It was about getting the first-place win for the team and kind of moving on to the next event,” Bruce said. “So it wasn’t something I really relished in, but it definitely made me feel good that I was able to score those 10 points for the team. And, you know, we could get the win too.”

Another track athlete that succeeded at the conference championships was first-year graduate student Liana Shames. Shames came in first place in the weight throw with a distance of 15.48 meters, a personal best for her, beating second place by nearly half a meter and third by 0.82 meters. She said her mark was important to her not only as a personal best but also as something she could share with the team.

“Honestly that was really exciting,” Shames said. “I had never thrown that far, so it was kind of a surprise to me at the moment. I heard the mark and thought, ‘That’s a huge personal record.’ And then it was amazing because a majority of my teammates were done with their events, so they had also seen that throw, and that was special.”

With the swimmers’ focus now pointed toward the NCAA Division III National Championship from March 16 to 19, team members want to shift their focus on fine-tuning their skills before the tournament begins. The program has found individual success at nationals in the past, as Colin Herlihy ’96 came in first place in the 100– and 200-yard breaststroke at the 1996 championships. However, the men’s team has not placed a swimmer on the top step of the podium nationally since.

The women’s swimming and diving team has had recent success at nationals, as Nickie Griesemer ’17 won a pair of national championships in 2018 as a graduate student, winning national titles in the one-meter and three-meter dives. She became the first student-athlete in program history to win a national championship in diving.

Wadsworth said his goal before the championship meet will be to strengthen his mental game, making sure he is prepared to face the other swimmers at the competition in his own mind. He said he does not want to mess up the little things because he got distracted during such a big moment.

“​​I’m working to look at being mentally prepared for high–level competition,” Wadsworth said. “Being right next to somebody who is swimming for the same things that I’m swimming for and is willing to do the same things that I’m willing to do for those reasons. So just getting mentally prepared for that is what I’m looking to do, and just refining my smaller details.”

At the same time, the track athletes are preparing themselves for the NCAA Division III indoor track & field championships March 11 and 12. Bruce said she is working to be prepared for national competition, but her focus is less on the competition and more on the mental strength needed to compete in the pentathlon.

“Right now is a lot of mental preparation,” Bruce said. “The performances have to come together. It’s really hard to put together five great performances with all of the events. … I’m just going to have to mentally be prepared for that.”

“We love to see the hard work pay off,” Potter said. “The team makes a lot of sacrifices and they work very hard, so we love to see them get what they deserve out of the championship. … That’s what being a team is all about.”