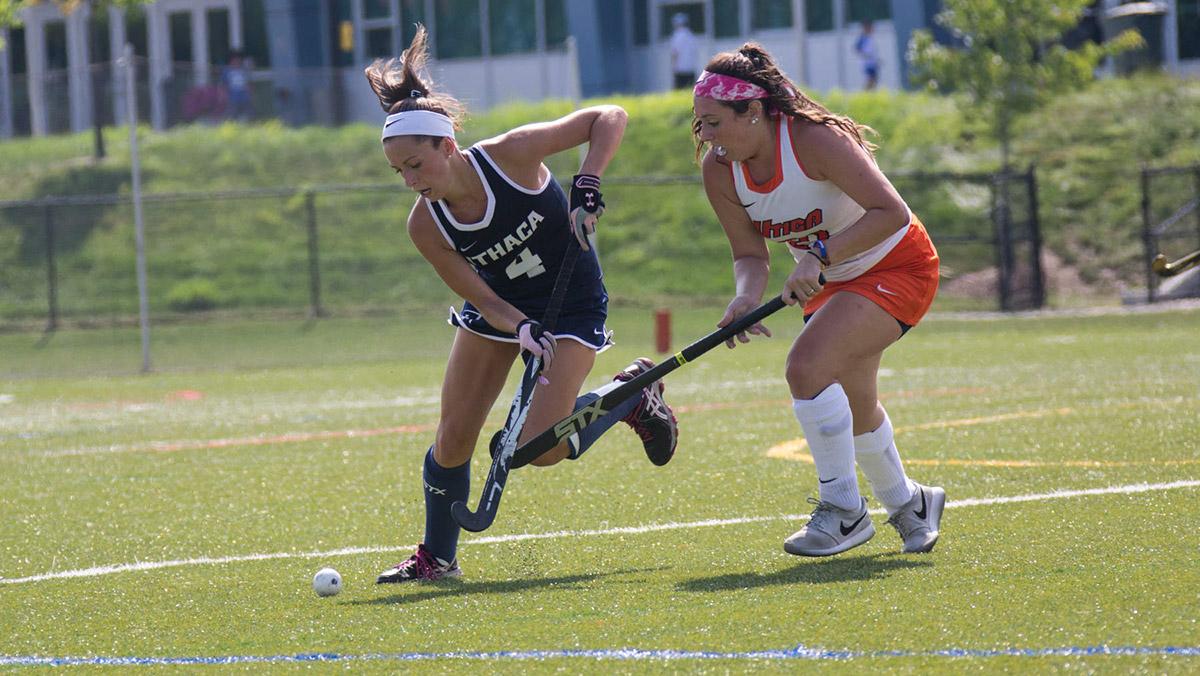 CAITIE IHRIG/THE ITHACAN
Senior Colleen Keegan-Twombley runs with the ball past a defender in the Bombers game Sept. 10 against Utica College in Higgins Stadium. She scored two of the three goals for the Bombers 3–0 win.
By Adam Brobst — Staff Writer
Published: September 13, 2016

For the past three seasons, senior Colleen Keegan-Twombly has been a staple of the Ithaca College field hockey offense. Although she was the team’s leading scorer last year, scoring 15 goals in 18 games, she credits the team as her main motivation — a theme reflected throughout her athletic career.

“Not only the bond built with all the players, but coming out every day and doing something I love with passionate teammates is great,” Keegan-Twombly said.

Keegan-Twombly said she worked hard during the offseason to improve all facets of her game as she headed into her final season.

“I’m really looking to help contribute to all the success we’ve had on the field, whether that be scoring goals or on the defensive side,” she said. “I’m looking to build off that and continue to be in the right place at the right time.”

Though she is now the Bombers’ leading scorer in field hockey, she began her athletic career in gymnastics. It was not until eighth grade that she picked up a field hockey stick for the first time, and she was pulled up to the varsity team at Kingston High School in Kingston, New York, a year later.

“I loved my teammates, which I think was a huge reason I loved playing,” Keegan-Twombly said.

When she was a junior in high school, Keegan-Twombly said, she knew she wanted to continue playing.

“I couldn’t go through the next four years not being part of a team and having that bond, and of course the competition, and started speaking with coaches,” she said. “Ithaca offered the best program in such a great college town. It was a great fit.”

As a freshman, Keegan-Twombly played in 16 games — but did not start any games — and scored one goal. Her second year saw 16 starts with nine goals. Last year, she finished the season with 15 goals and three assists, with her highest–scoring game Oct. 7, 2015, against Wells College, where she totaled three goals.

Head coach Tracey Houk said Keegan-Twombly is one of those players who works to improve every day.

“She keeps getting better and better,” Houk said. “Like any player as they keep on playing, their stick skills get better, and the intensity gets better, and the people around you get better. It’s just really nice to see her progress. … She’s really bloomed into a beautiful player who’s fun to watch.”

Keegan-Twombly said that after the team lost three seniors, she stepped up her offseason regiment, working on strength and conditioning. She specifically worked on her shot and on getting comfortable with her spot on the field.

Houk said one of the key elements of Keegan-Twombly’s game is her mechanics and technique.

“She has the ability to go into a crowd and keep the ball on her stick, and use her strong side, reverse side, pulls and fakes,” Houk said. “It’s not easy to do when there’s a lot of pressure on you, and she does a nice job of that.”

This season, Keegan-Twombly has scored four goals in the first four games, including two goals and one assist Sept. 10 against Utica College to help the Bombers clinch their first win of the season.

As one of six seniors, Keegan-Twombly said she has taken on a leadership role on her team and that being a good example for her teammates is something she strives for.

“Being a starter and being a senior — the leadership comes with that role,” she said. “I make sure that I always have a great attitude for practice. And I’m always showing how hard I’m working and kind of making sure that that attitude and work ethic is trickled down through the whole team.”

Sophomore forward Emily Vallee said Keegan-Twombly has been a great leader for the team.

“Colleen is a great leader on and off the field,” Vallee said. “She is the perfect combination of composed but passionate, and is very consistent. I think that’s the most important thing in leading. Most importantly, she really knows how to put the ball in the cage.”

Houk said Keegan-Twombly sets an example for the team in both practice and in the locker room.

“She’s really determined and vocal,” Houk said. “She has the ability to motivate the people around her. It’s nice to have somebody who has strong stick skills and a strong presence, and is able to bring other people up with her. That’s definitely Colleen.”

Keegan-Twombly said playing with the Bombers has been one of the best experiences of her life.

“It has been incredible with a lot of great moments,” she said. “I feel as though I have really seen the program grow and develop in many different aspects.”