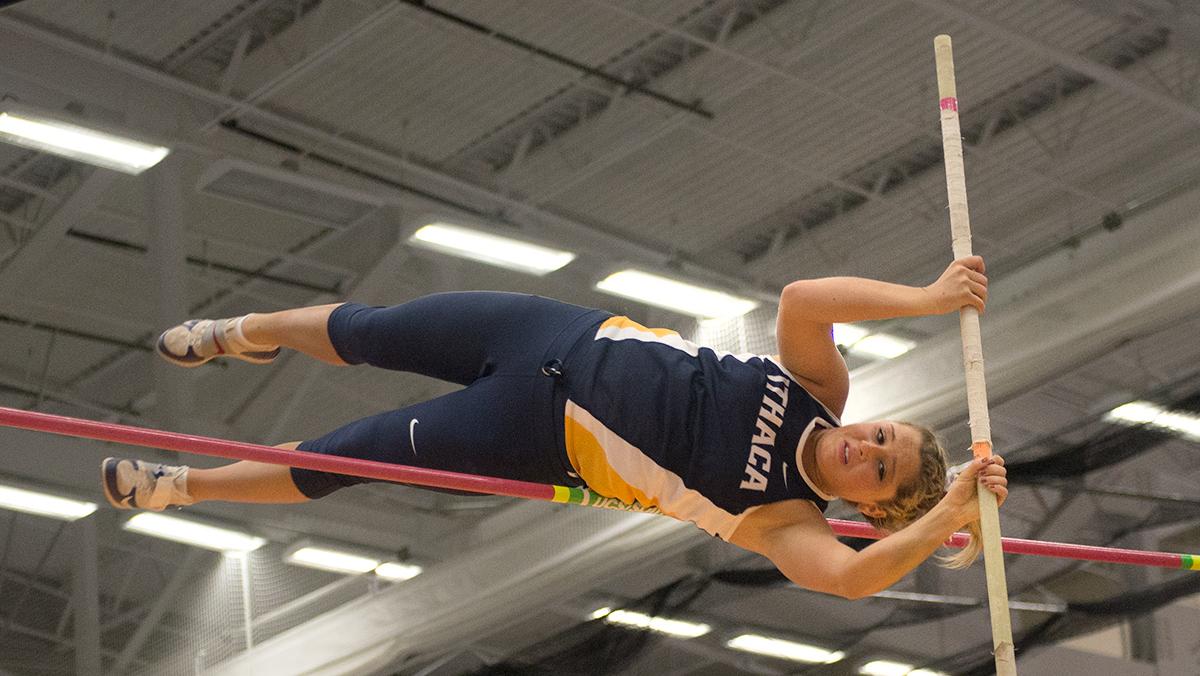 A situation that might be disheartening to athletes ended up being one that changed senior Nicole Razzano’s life for the better.

Razzano was recruited to Ithaca College for gymnastics and competed on the team her freshman year. She had been a gymnast since age 4, and she said the sport was a significant part of her life. She said her career ended during her sophomore year, when her entire class was cut from the team.

Frantic and unsure what to do, Razzano said she turned to the women’s track and field team — it is typical for gymnasts to transition to pole–vaulting since both sports require a great amount of upper–body strength — but did not find exactly what she was hoping for.

“I thought I needed something right away to rebound, so I did it for like a week,” Razzano said. “Then I realized I wasn’t ready to fully commit to a different sport because I was almost going through like a bad breakup with gymnastics.”

Razzano took the rest of her sophomore year off from sports, but she said her interest was sparked again after she saw the passion her friend and roommate, senior Katherine Pitman, found for pole–vaulting. Razzano and Pitman met during their freshman year on the gymnastics team and were part of the sophomore class that was cut from the team. They quickly befriended each other. They immediately tried track and field, and Pitman stayed.

Pitman went on to win the pole vault at the NCAA National Championship during her second year on the team.

“It was pretty devastating [getting cut], but it turned out to be the best thing that ever happened to me,” Pitman said.

Razzano said Pitman inspired her to give pole–vaulting another chance her junior year.

“I realized something was missing because I had been competing my whole life, so I decided I would give it another try,” she said. “I had gone to her meets and heard her talk about all of the great friends she made and how great the coach is.”

Pitman said that while her passion for the sport was contagious, she also believes Razzano made the decision to return to the team for herself.

“I think I could have persuaded her in a way because of how I outwardly express how much I love the sport and I love my team and how it changed my college experience for the better,” Pitman said. “But she is a really competitive person and a really hard worker, so I think it’s something she wanted to do for herself.”

Pole–vault coach Matthew Scheffler coaches the Lansing High School’s team as well as the college’s, and he also runs a pole–vaulting club. Scheffler said he teaches new pole–vaulters from the box back, a method where you the pole–vaulter works backward down the runway. He first teaches the athletes how to hold and run with the pole, increasing running distances as they get more comfortable. Scheffler said this process is complicated to get the hang of, but some individuals have an easier time than others.

“It’s not a normal process for anyone, so it usually takes quite a bit of time,” he said.

Scheffler said he has seen many athletes adjust well from gymnastics and diving to pole–vaulting because of the overall body awareness necessary for all three sports.

“They transition very well to pole–vaulting just because of the general gymnastics that is in the air,” Scheffler said. “There’s a lot of time spent on the plant and the run, but the in-the-air stuff, like the body awareness, they already have. So it’s a very easy transition.”

Razzano said physically, gymnastics and pole vaulting involving similar muscle groups and movements has helped her transition. Coming from gymnastics, she brought with her good body awareness, and she knows how to control herself when she is upside down and flipping. However, Razzano said she still needs to work on her approach, as she needs to get faster in her sprint in order to vault higher.

The transition on the whole, she said, has definitely been fun.

When Razzano first started, Scheffler said, he had to help her quite a bit, but she caught on pretty quickly.

“There are things she does get very well,” Scheffler said. “If she had started another year earlier, she’d be further ahead right now. But she’s doing super well with it, picking it up quick. We’re hoping to have her be a scoring member of our team by the end of the season, so she’s getting very close to that.”

“She’s super sweet and a fun person to work with,” Scheffler said. “She seems very happy, and we’re happy to have her. Having the two of them there together really works out well. Training-wise, it’s just nice to have people that like each other.”

Razzano said that although it was a shock at first when she was cut from the gymnastics team, it ended up working out for the best.

“I guess you could say I like competing in pole–vaulting a little more than gymnastics,” Razzano said.