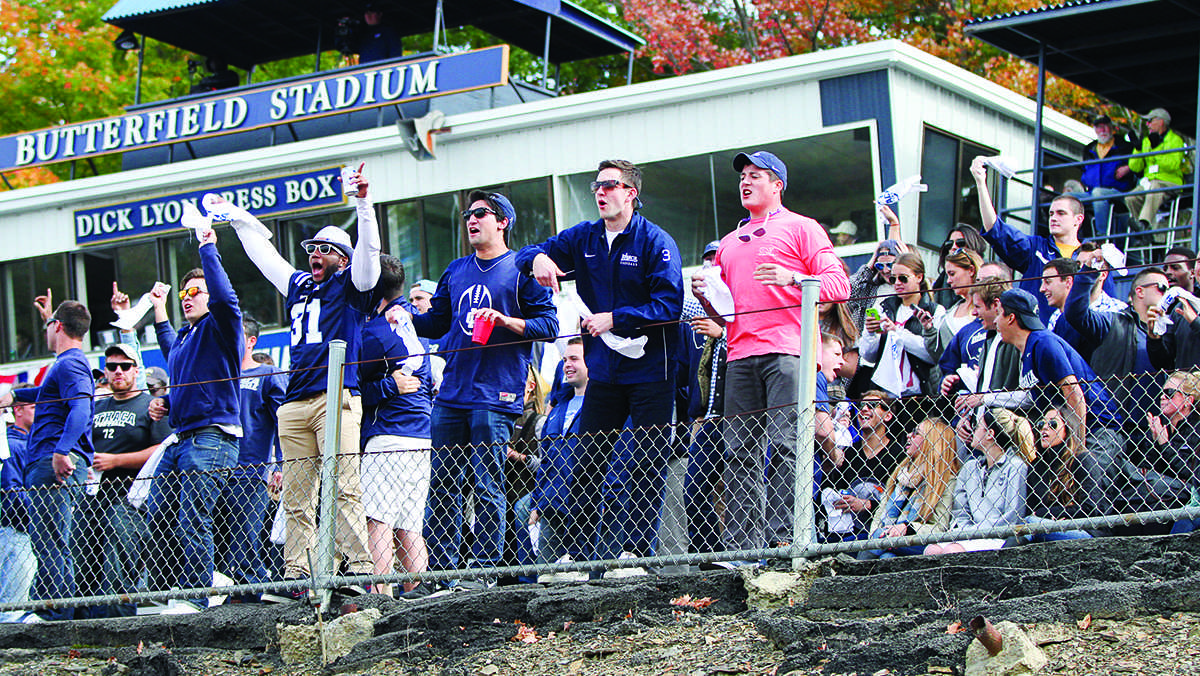 The section synchronized the chant and the rhythm based on the cues of their capos. They had plenty of time to get it right. Landon Donovan had scored what would end up being his last international goal, again creating that familiar scoreline in that same city. ESPN commentator Ian Darke summed it up perfectly.

Darke’s commentary came in the 78th minute in what would be the fourth consecutive time the United States Men’s National Team defeated Mexico 2–0 in Columbus, Ohio, in FIFA World Cup Qualifying spawning that chant and creating another chapter in the most well-known narrative in American soccer:

Senior Marissa Villegas was there to chant that chant on Sept. 10, 2013, fewer than three weeks into her first semester as a junior. A trip to Columbus to see the United States defeat its rivals and qualify for the World Cup was worth far more to Villegas than just another Tuesday in class.

Senior Jesse Feldman also had no qualms disregarding classwork as he made the trip to Pittsburgh, Pennsylvania, to watch the San Francisco Giants play the Pittsburgh Pirates in the National League Wild Card Game on Oct.1 — the middle of the week for the television-radio major and color commentator for WICB’s football broadcasts.

“I actually didn’t think that much about classes,” Feldman said. “I’d only miss two classes on that day. They weren’t classes that I had to be at, so I thought, ‘I’m not going to miss work, I’m not going to miss any extracurriculars, easy way to go see a Giants playoff game.’”

The playoff game was the first time Feldman saw the Giants in person during the postseason. The love for a team is not genetically passed down, but Feldman’s father, Alan, did not wait long after Feldman’s birth to pass down his love for the Giants to him.

“My dad was a Willie Mays fan growing up, and he still followed them when they moved to San Francisco,” Feldman said. “They were just the first team I watched, the Giants were always talked about in my house.”

Feldman and his father take trips every summer to see the Giants play when they travel to the East Coast. This season, they traveled to San Francisco to see pitcher Madison Bumgarner and catcher Buster Posey become the first battery to each hit grand slams in a game against the Arizona Diamondbacks on July 13. Three weeks after the Giants defeated the Pirates 8–0, Feldman said he hopes he will get to see a World Series game as the Giants take on the Kansas City Royals.

The Giants are three wins away from winning their third World Series in five years. They are on the verge of an accidental dynasty, three World Series titles without ever finishing the regular season with the best record in the National League. The lack of regular season dominance required the Giants to pull the upset at least once in each of their previous World Series runs. They were the underdog, a mentality Feldman said he embraces as he tries to get a job in the broadcasting industry.

“Everybody is good out there,” Feldman said. “Everybody is good at their job. The amount of jobs that are out there are slim compared to the demand. Coming out of college in — wow, half-a-year — getting a job is a way to be as an underdog in life as a whole.”

According to the Bureau of Labor Statistics, there are 30,530 radio and television announcers as of May 2013. The statistic verifies Feldman’s fear that jobs in his field are hard to find. Considering the Economic Policy Institute’s report that 16.8 percent of recent graduates are underemployed, it is not melodramatic to feel that finding a preferred job out of college seems to happen almost by chance.

Villegas got to Columbus by chance. Unsure of her plans, Villegas did not enter the ticket lottery for the game, but a chance encounter on Twitter resulted in her plans making themselves.

“Prairie Clayton — a well-known member of The American Outlaws, the USA’s largest supporter group — and I have been Internet friends,” Villegas said. “She said something like, I have four tickets for her and her husband and if anyone didn’t end up getting tickets, let her know. I jokingly tweeted immediately after that Molly Voss and I should do it and Prairie was like, ‘OK, they’re yours.’”

Serendipity got Villegas to Columbus. Once there, she entered delirium as Donovan gave the USA the 2–0 lead in Columbus. She said she aims to take her chance at a job in the television industry, just as Donovan took his chance at scoring a goal.

Donovan is retiring at the end of the current Major League Soccer season, ending an eponymous era in American soccer. Donovan’s career with the National team lasted 14 years, and he scored his first goal 14 years ago on Oct. 25 in a 2–0 win against Mexico. Villegas was 7 when Donovan scored his first goal in his first appearance, and 21 when Donovan made his final national team appearance on Oct. 10 in Hartford, Connecticut. The timing of his career and her childhood begins to explain why Villegas holds Donovan in reverence so much.

“He’s the one I had on my wall since I was 8 years old,” Villegas said. “I’m not a sentimental person when it comes to real life, and I don’t have a lot of memorabilia that’s signed. The one person’s signature I have out of actors, musicians, celebrity, anything is Landon because that means so much to me.”

Donovan will not be as revered by Villegas on Oct. 25 as his club team, the LA Galaxy, will play the Seattle Sounders in the final game of the MLS regular season. Villegas is from Seattle and the Sounders are her team. If her team wants to win the Supporters Shield, the award given to the team with the best regular season record, it must not lose to Donovan’s Galaxy.

Though NBC’s broadcast will allow Villegas to watch the Sounders, she is a nation away from the Brougham End of CenturyLink Field where the Emerald City Supporters, the Sounders’ largest supporter group, will stand and shout for 90 minutes. This is the group Villegas attends games with. They are also the people with whom she shares a strong bond.

“Pride of a city is a special thing,” Villegas said. “When you have a bunch of bearded hipsters and you feel like you know them because that’s your people, that’s awesome.”

While the Emerald City Supporters and the American Outlaws provide that sense of community for Villegas, she has seen fellow supporters embrace tribalism and negatively direct its energy toward rival supporter groups, mainly the Timbers Army, the largest Supporter Group for the Sounders’ fiercest rival: the Portland Timbers. Stephen Mosher, professor in the Department of Sport Management and Media, said there are inherently human elements to this tribal behavior.

“Having someone or some team to admire and with who to identify helps us up decide how to live our own lives,” Mosher said. “Many athletes and teams demonstrate admirable human qualities that are transferable to other aspects of our lives. Humans are essentially ‘pack’ animals and the ‘team’ may be one of the most obvious examples of being able to join the ‘pack.’”

Sounders-Timbers games are as eagerly anticipated by Sounders fans as Cortaca is by Ithaca College students. Both will circle the game’s date on the calendar and plan around it. While the excitement allows for the college and SUNY Cortland to have a Division I football atmosphere for the weekend, Mosher said Ithaca College must avoid attempting to capitalize on the hype.

“The environment created at most Division I colleges is entirely oriented in making money for reasons that are antithetical to the mission of the college,” Mosher said. “Imagine Cortaca eight or nine times a year… that’s D-I football.”

Mosher added that professors should help students better decide if opting to skip class to go to a game is truly worthwhile. However, he acknowledged that not all games are created equal so only a few are truly worth the time and effort. In Feldman’s eyes, the trip to Pittsburgh was worth it. The same applies for Villegas’ trip to Columbus.

“That community and that atmosphere and that specific game is way more important to me,” Villegas said. “Don’t get me wrong, I like school and I think education is important, but experiences are higher priority than just one day in class. That’s not an experience. That’s life.”