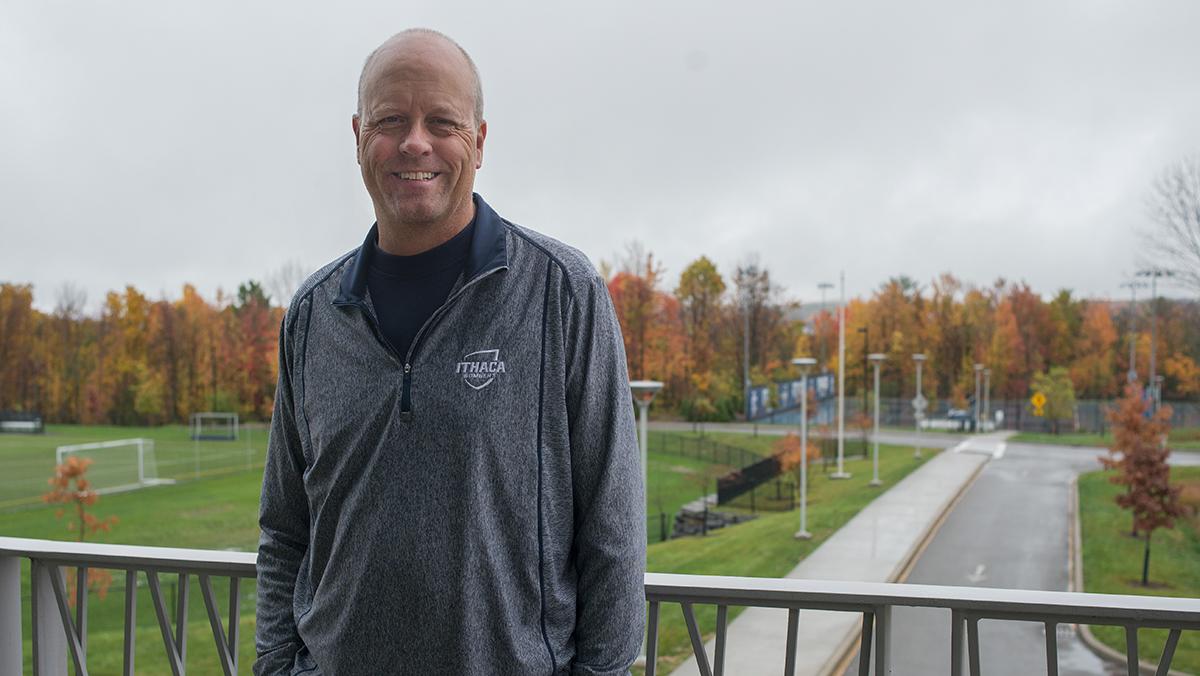 For the past 17 years, Bill Austin has been a staple on the Ithaca College tennis courts. Now, the head coach has cemented his place in the record books as the women’s tennis program’s winningest coach after he earned his 200th career win Oct. 1 against Nazareth College.

Austin said he has enjoyed the journey and the people he has met along the way.

Austin said one of the most memorable coaching moments occurred during the men’s Intercollegiate Tennis Association Northeast Regional Championship in 2009. Austin had to leave the invitational in Willingboro, New Jersey, to travel to Hoboken, New Jersey, with the women’s team to face off against Stevens Institute of Technology.

After the women defeated Stevens 7–2, Austin said, they immediately called the men’s team to find out how they did.

“We are gathered around the phone on the bus getting a play-by-play from one of the players,” Austin said. “The moment they found out they won, we just erupted. It was cool sense of family.”

Senior Haley Kusak said Austin has been an influential part of her college career.

“He has helped me grow not only as a player but as a person as well,” Kusak said. “Many of the lessons I have learned through being coached by him have translated into many different areas of my life.”

Assistant coach Jordan Smith, who has worked alongside Austin for two years, said Austin knows exactly what to do to prepare his players for tough matches.

Kusak said Austin’s strength as a coach is keeping the team on track.

“Coach Austin is good at creating a fun environment in order to keep the team focused,” Kusak said. “If the team is not having fun, then it causes our minds to wander during practices and drills. His energy keeps us focused and motivated.”

Austin said he does not feel that numbers and records are what make him accomplished. He said creating a recognized and respected name and reputation for the college’s tennis teams is what has been the most important to him.

Austin said receiving his 200th career win is a milestone for him but that he doesn’t plan to let that distract him from the game. He said his next focus is the team’s transition to the Liberty League and preparing the team for the NCAA Championships in the spring.

“Milestones are very cool; it’s a great honor, and it’s something I will cherish,” Austin said. “But the job is still ahead of us.”