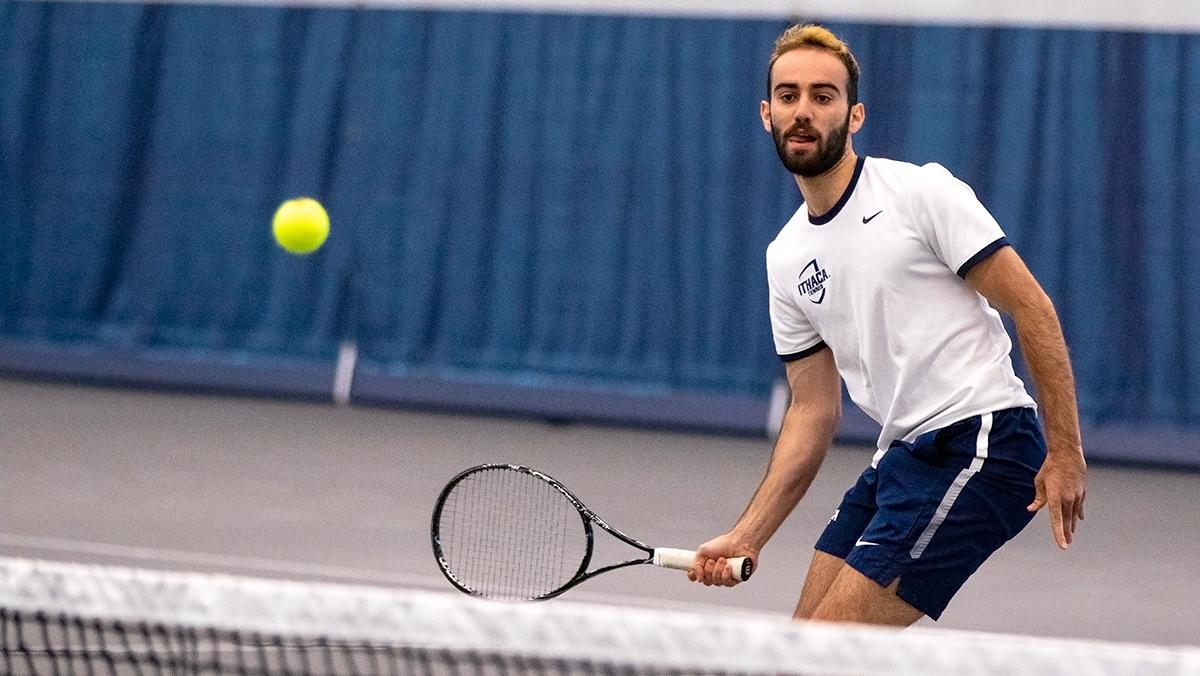 When not playing on the courts, the Ithaca College men’s and women’s tennis teams look for a constant edge in getting high school tennis players to commit to the program. Along with searching New York state for top talent, the coaching staff has found success looking outside of the state and even outside of the country.

On the men’s team, eight of the 10 players are from outside of New York, three of which are international students, coming from Ecuador, Greece and Spain. Of the 15 players on the women’s roster, seven are from outside of New York. Two players on the men’s roster are from Florida, while two on the women’s team are from Pennsylvania. Chris Hayes ’16, men’s and women’s tennis head coach, said that when it comes to getting recruits outside of the state, the most important thing to focus on is promoting the college to recruits.

“It’s about getting our name out there,” Hayes said. “I use a variety of tools to get the Ithaca name and our logo out there for people to see that we are a reputable school. I recruit all over the country at different showcases and in tournaments. I send a ton of emails to kids, not just from all over just the country but the world as well.”

For international recruits, that process of recruiting in American schools leads to players from one area going to many different schools across the country. Sophomore Nicolas Luis said tennis recruits in his home country of Spain end up going to a wide variety of American colleges.

“I know people who’ve gone to larger colleges, but I also know other people who have gone into smaller colleges and people who stayed in Spain,” Luis said. “But I don’t know other players who went to college in New York.”

Hayes said that the process of recruiting outside of the country also differs from national recruiting because of differences in recruits being greater than in national recruiting. Hayes said Luis never visited the college when he was being recruited, but senior Minos Stavrakas did visit campus when Hayes was still a player on the team. Hayes said because of how different the process can be, what resources recruits have access to changes as well.

“It’s really different for all international recruits,” Hayes said. “The most important thing to me is consistent communication. … If we can get them over for a visit, that’s great. But if we can’t, it just kind of is what it is. It’s a lot to ask to travel across the sea to visit campuses, especially if they don’t necessarily have the resources to do it, especially in COVID times. So for each international recruit, we have to go about it a different way.”

One way that Hayes and the coaching staff convince players from out of New York to go to school in the state is by making connections. Hayes said that the most important thing in recruiting players is keeping them in the loop through connections Hayes has created.

Stavrakas, who joined the team before Hayes became the coach, said one of the ways he has seen Hayes make that connection with recruits has been to stay in contact with them through texts as well as highlighting the atmosphere around the team.

“[Hayes] reaches out on a personal level with the recruits,” Stavrakas said. “He tries to bring them to campus so they can see the school and meet us because that’s the best advertisement for bringing in someone to the team. For them to come and see, watch or just play and spend time with the team is really huge for them.”

Freshman Lauren Rodriguez, who is from Austin, Texas, was recruited by Hayes and said she stayed in close contact throughout her time being recruited.

“He was going to make an in-person visit to Texas,” Rodriguez said. “But it was during COVID, so he couldn’t make it down to Texas. But he did text me quite a bit and we had phone calls pretty often.”

Hayes said that connections with people he had played against in college played a large part in how he recruited Luis. Due to the fact that Luis was unable to visit the college, Hayes said his contact with Luis started because of a connection he had from his time playing.

“When I first became the head coach, it was a year and a half into when I was an assistant coach,” Hayes said. “And someone I used to play against in college who went to Bloomsburg [University] was working with [Luis] and finding a good place to go to college. And he recommended us by saying, ‘They run a good program at Ithaca College, and Chris is a great coach.’ That’s how it all really started with [Luis]. I began talking to him and a few months later, he committed.”

Hayes said that while it takes him time and a lot of work to recruit, he enjoys getting to go on the road to meet players, exploring areas outside of New York, which allows him to see other parts of the country that are totally different from New York. Hayes also said that he enjoys connecting with his recruits.

“I enjoy recruiting,” Hayes said. “It’s a treat for me because I get to explore different parts of the country. … So recruiting is a really special experience for me, personally. And a big part of my recruiting is really getting to know the people I’m recruiting. … You’re asking this person to come join your program for the next four years, so a big part of my coaching philosophy is developing a strong relationship with players. Developing a relationship during the recruiting processes is very important to me.”

Men’s tennis team looking for a bounce back season