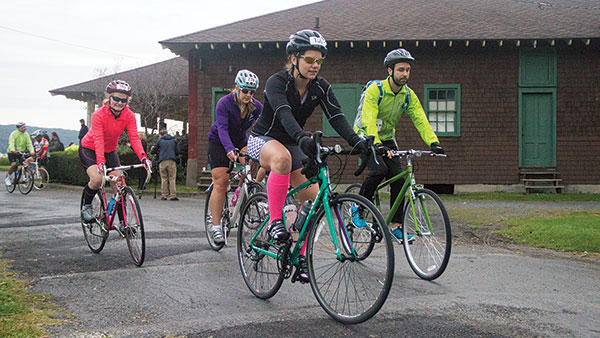 At 6:30 a.m. on Sept. 13, seven former members of the women’s rowing team gathered on familiar ground. With Cayuga Lake, their rowing home during their collegiate athletic careers, providing a recognizable backdrop, the former Bombers met at Stewart Park, the starting line for the 16th annual AIDS Ride for Life.

The morning was chilly, in stark contrast to the early September heat that was present in the area during the weeks leading up to the ride. A cold drizzle fell, creating unfavorable riding conditions. But not even the weather hindered the spirits of the seven riders, who had prepared all summer for this day.

It all began with an idea sparked by an experience with crew. Each year, the team served dinner and helped with cleanup at the ride’s finish line. The volunteer work inspired one of the members, Dominique Lessard ’14, to think about forming a team.

“Getting to talk to riders about their experience and how positive and happy they are after biking 100 miles was something I had always been curious about,” she said. “That endurance aspect really drew me to it.”

The AIDS Ride for Life is a bicycle race to raise money and awareness for AIDS and AIDS research. It features three different rides of varying lengths, capped at the 100-mile ride. As the team began to take shape over the summer, graduate student Caroline Dykstra said, the 100-mile ride was the most appealing option because of the challenge it presented.

After deciding to sign up for the race in June, Lessard and Dykstra began to recruit other former crew teammates to join their team. By the end of the summer, five other former rowers had agreed to join: graduate student Lindsay Beatty, Regina Wuest ’13, Rebecca Lee ’13, Tessa VanDerVeeken ’12 and assistant women’s crew coach Beth Greene ’00.

Together, they came up with the team name #TaperLife. Beatty said the name represents the idea that the members are not tapering off athletically, even though their rowing careers are over.

“When you graduate crew, you think that you’re not going to be working as hard as when you were on the team,” Beatty said. “But doing 100 miles is harder than anything we did on crew, in a sense.”

The team was among the last to start the race, and a heavier rain began to fall as they crossed the starting line. The first 20 miles of the ride was the steepest portion, featuring the two biggest climbs as the riders headed up the east side of the lake.

The rolling turbulence of the hills contrasted with the smooth mechanics of rowing a boat that the team members experienced during their careers at Ithaca College. Though each member was on her own bike, they still functioned as a team, just as they did in their boats.

“It says a lot about the crew team that even after we are done rowing, we are still trying to find ways to be active together and still are doing things that most people would shy away from,” Dykstra said.

Heavy rain continued to pour as the minutes turned into hours. The team gradually separated into two groups as they approached the 60-mile mark, where they would be served lunch.

After lunch, the team resumed the ride. The rain had finally faltered, and the sun was poking through the clouds. Deviating from its earlier groupings, the team instead separated into three groups for the final 40 miles.

Lessard found herself in the middle group with Lee. It was a suitable pairing, for the two had done much of their training together and are also co-workers at the Finger Lakes Running & Triathlon Company. In addition to completing a weekly 50–80 mile ride, Lessard and Lee have also cross-trained by running.

As Lessard rides, she thinks about the training that had led up to the race and how far she had come since she registered for the race in June.

“I was a very incompetent biker when I signed up,” she said. “I was nervous to take my hand off the handlebars to signal, or even to put my feet in the pedal cages.”

However, her motivation to find a new athletic outlet to replace rowing overpowered any inexperience she had with competitive biking. The passion she found for biking also correlated with her love of endurance sports.

A biology major while at the college, Lessard also said she felt close to the cause for which she was riding.

“While I was at IC, I worked in an infectious disease lab, so I have more of a curiosity tie-in [to AIDS],” she said.

Lessard and Lee were riding approximately 40 minutes ahead of the third group, which contained Dykstra, Wuest and Beatty. For Dykstra, the ride was a family matter, both from a biking and an AIDS standpoint.

Dykstra’s mother is a pediatrician in a local community health center in her hometown of Andover, Massachusetts, and works closely with children and their mothers who are HIV positive. Because of this, Dykstra feels more of a connection with the disease.

“It’s definitely a cause close to my family’s heart,” she said.

VanDerVeeken and Greene were the first members of the team arrive at Cass Park, crossing the finish line after approximately 7 hours and 45 minutes of riding.

Lessard and Lee finished about 20 minutes after the first group, and Beatty, Dykstra and Wuest came in at around 8 hours and 45 minutes. After completing 100 miles and overcoming adverse weather, Beatty said the group was overwhelmingly happy.

“At one point, we were riding and it was just pouring rain, and there was nothing you could do but laugh about it,” she said. “It was just so crazy that we were out there and there were other people who were crazy enough to do it with me.”

For the team members, the AIDS Ride provided a way to not only stay in shape, but also to solidify the strong friendships that were forged through their experiences on the crew team.

“They’re not just my teammates, they’re some of my closest friends,” Dykstra said. “That’s a bond that I think we are going to carry with us for the rest of our lives.”