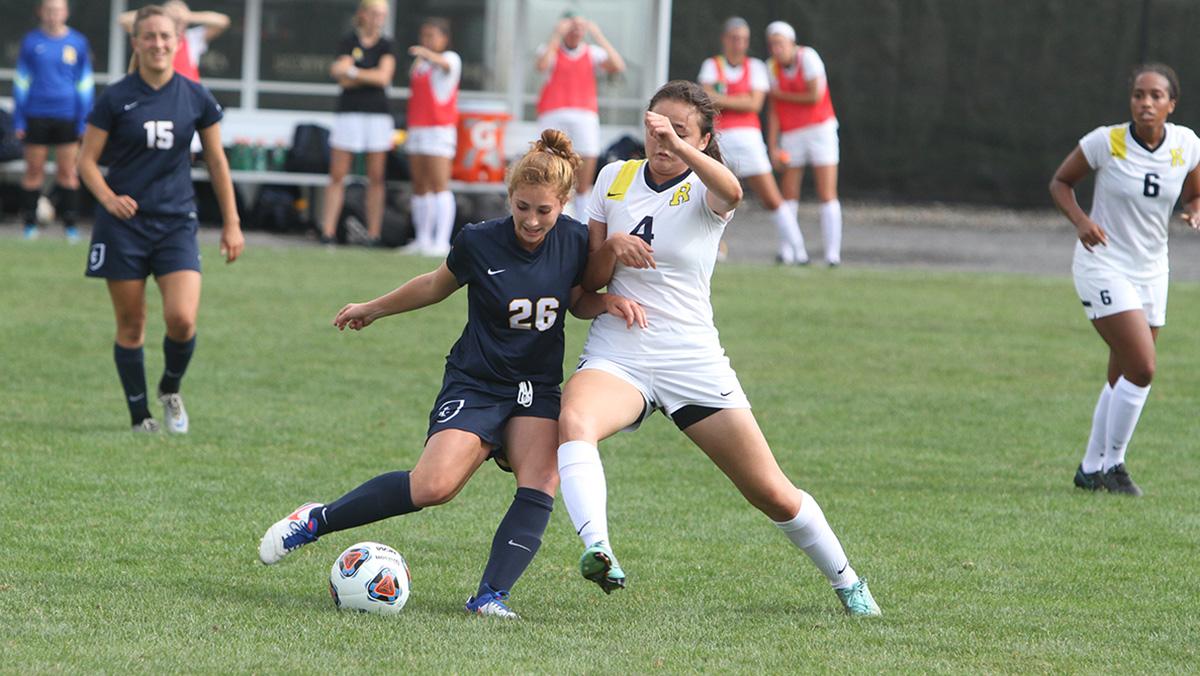 The Ithaca College women’s soccer team went 1–1 in the Upstate Collegiate Cup that they co-hosted alongside SUNY Cortland Sept. 17–18. The teams that also participated in the tournament included SUNY Cortland, the University of Rochester and William Smith College.

The Bombers opened up the tournament Sept. 17 with a 2–0 loss to the Cortland Red Dragons on Carp Wood Field. The Red Dragon’s offense was able to come out strong early on in the game. Sophomore forward Amanda Profera found the back of the net for Cortland in the 34th minute of the match. In the 52nd minute, sophomore midfielder Vanessa Romero was able to secure a loose ball in front of the Bombers goal and doubled the Red Dragons lead.

After halftime the Bomber offense came out with a new found intensity. Lead by senior forward Jocelyn Ravesi, the team was able to put four dangerous shots on net, but the Cortland defense left the Bombers scoreless. The game would end with Cortland outshooting the Bombers 22–9.

The Bomber defense was led by sophomore goalkeeper Stacey Digorgio. Digorgio recorded a career-high nine saves after 90 minutes of play. Junior back Kendall Cirella also played strong in the back for the Bombers.

In the second day of action, the Bombers took on the University of Rochester Yellowjackets on Carp Wood Field, but ultimately tied 2–2 in double overtime.

The Bomber offense started the first half with intensity led by senior Jocelyn Ravesi, as she secured a corner kick in the second minute of play. Although it went wide of the net, it inspired powered the offense to continue to pressure the net. Ravesi had three shots and two corner kicks within the first 20 minutes.

Scoring was opened up by Yellowjacket junior forward Paige Gloster, as she was able to sneak past the Bomber defense in the 23rd minute. The goal was answered by Bomber sophomore midfielder Shoshana Bedrosian when she was able to capitalize on an assist from senior forward Megan Nash in the 43rd minute.

In the second half, Ravesi recorded her fourth goal of the season in the 56th minute, giving the Bombers the lead. However, the goal was answered 11 minutes later when Gloster recorded her second goal of the match as she headed in a corner kick from freshman back Dani Aceves. Regulation would end in a 2–2 draw, sending the game into overtime.

Overtime would lead to a battle of the offenses. The Bombers recorded 10 shots and three corner kicks while Rochester had only three scoring chances. However, the game would end in a tie as neither team was able to finish in the additional 30 minutes.

The Bombers take the field again in an Empire 8 battle against the Hartwick College Hawks at 12 p.m. Sept. 24 at Carp Wood Field.