Junior continues to lead in second year as captain 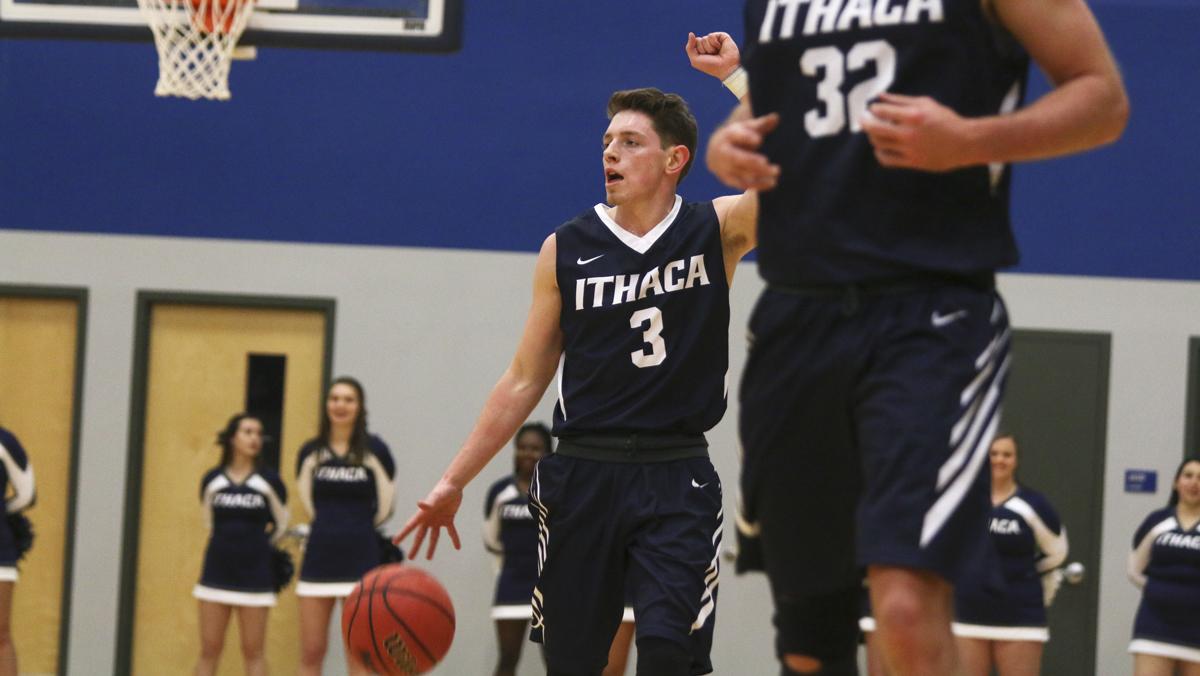 When junior guard Riley Thompson stepped onto the court in Ben Light Gymnasium during his freshman year of college, he was one of the new kids on the men’s basketball team. Precisely one year later, he was leading the team as captain.

To say that Thompson has been productive in his tenure with the Bombers would be an understatement. He appeared in all 25 of the Blue and Gold’s games during his freshman season and was named a Liberty League All-Conference Honorable Mention as a sophomore. This season, Thompson is averaging 18 points per game and has scored more than 20 points in 12 of the team’s 25 games.

In addition to Thompson’s extraordinary play during the early stages of his college career, his appointment as captain as a sophomore is unusual. The Bombers have only had one other sophomore captain besides Thompson in the past 15 years and have only had six junior captains. The other sophomore captain, Marc Chasin ’18, was Thompson’s co-captain during the 2017–18 season. Thompson said that Chasin helped him improve his leadership skills.

“[Chasin] played a big role model for me,” Thompson said. “I want to build off of that. I want to be more outspoken this year and gain my teammates’ trust, as well as being more confident in what I have to say.”

Head coach Jim Mullins said that Thompson’s demeanor on the court motivates the rest of the team, as he is constantly giving maximum effort.

“I love his competitiveness and work ethic,” Mullins said. “He’s got one of the most competitive attitudes I’ve been around.”

Mullins said that Thompson’s hard work was exemplified in the team’s game against Bard College on Dec. 1. Thompson contributed 26 points, but what really stood out was his seven rebounds. Mullins said that this statistic is uncommon for guards, especially because Thompson is only 6’0”.”

Thompson said being undersized has helped develop his leadership skills. This is because he must adapt to the level of play and outwork his opponents.

“I feel that I play as hard I can,” Thompson said. “As an undersized guard, I got to compete all the time on every play. I take pride in being a leader, I have grown over the past year to lead vocally and this year I lead by example. This offseason I encouraged my teammates to get in the gym for a big season.”

“After I told him that, he went home over the summer and worked hard on the dribble attack, which is taking offensive game to another level,” Mullins said. “He also lost some weight and he’s much quicker this season. He’ll do anything that I tell him to. That’s a coach’s dream. A lot of people only work on their strengths — he works on his weaknesses.”

Despite the fact that Thompson is the Bombers’ leading scorer and has the best free throw percentage, Thompson said he is not satisfied with only being a shooter.

“Some of my improvement involves areas like getting my shot at spots I want,” Thompson said. “I believe that I am a different animal when I can score anywhere on the court.”

Freshman guard Skylar Sinon, who has been a consistent performer for Bombers this season, said that Thompson’s competitive drive is unmatched by anyone.

“He always wants to win, and his passion for it is like nothing I’ve ever seen before,” Sinon said. “He’s probably the best shooter in our league, so it makes teams respect him and that just spreads the floor for us.”

Mullins said he believes that there are multiple attributes that make Thompson a great leader.

“One of the areas that make him such a good leader is whenever we ask him to do something he’ll do it,” Mullins said. “For example, we told him that if he added a drive component to his game it would benefit the team. He’s always been a good defender and now he’s rebounding much better. … It’s obvious that he has the ability, but more importantly the drive to make him great at that aspect.”

Mullins said that he credits some of Thompson’s previous coaches for helping him become as smart of a player as he is.

“He has a great basketball IQ, and some of that comes from previous coaches he’s played for,” Mullins said. “I could tell when he first came in as a freshman that he was very well–coached before. He’s one of those guys that just has a feel for the game and has a passion for it.”

Mullins said that Thompson’s continual growth as a leader made his candidacy for being a captain very obvious.

“Over the past couple years he has added a different dimension of leadership,” Mullins said. “As he has grown older it’s obvious that he’s became more vocal and that’s why I elected him last year and this year.”