Junior goalkeeper makes the most of starting opportunity 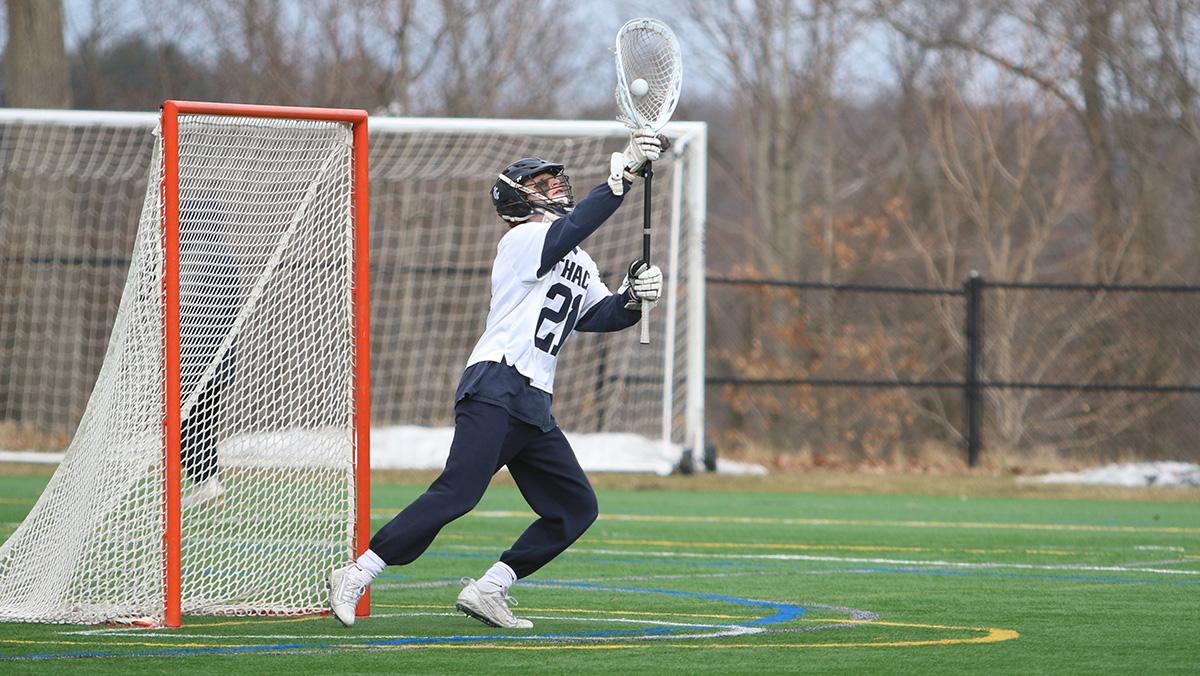 Abby Brady/The Ithacan
Junior Ryan LaForty, who has started 12 games at goalie for the Ithaca College men’s lacrosse team this season, warms up for a game against Nazareth College on March 23 at Higgins Stadium.
By Aidan Charde — Assistant Sports Editor
Published: April 26, 2022

For nearly three years, junior Ryan LaForty, goalkeeper for the Ithaca College men’s lacrosse team, did not start a game in the net. But after a midseason switch March 2, LaForty got the chance he was waiting for.

LaForty filled in for senior goalkeeper Connor Thornton, who started every game in 2021, after Thornton let in 10 goals in the first quarter of a Feb. 26 game against St. John Fisher College. In that game, which was the first time he had seen action since April 2021, LaForty played three quarters and let in just 10 more goals against the No. 7 ranked team in the country.

For head coach Jeff Long, that performance was enough to convince him that LaForty deserved a chance to start, which he did four days later against Lycoming College. Long said the decision to bench Thornton against St. John Fisher was not difficult, given the score, but the coaching staff put more thought into deciding who would take the starting job.

LaForty said it was a good feeling to step back onto the field in February, even if it was not the situation a goalie wants to be in. When he entered the game, the college was down 10–1 after just one frame, so he had work to do if he wanted to keep the Bombers in the game.

“When you have to put in your backup goalie, your team’s not in a very good situation,” LaForty said. “So from that point of view, it was kind of rough that we had to get back in the game, but it was exciting for me to get an opportunity to step on the field and show what I’ve been working on all these years.”

Since then, LaForty has not looked back. The team won seven straight games after the loss to St. John Fisher, and through 14 games so far this season, he has saved more shots than he allowed in in all but four games, with all four being ranked opponents.

LaForty said the win streak helped build his confidence while still getting used to his new role. Though the streak eventually ended in a close game to St. Lawrence University, he said it helped him feel more ready for the rest of the season.

“My first start, getting a win was very nice,” LaForty said. “Keeping that going for those seven games was a very good feeling, but it was definitely hard to keep it going … there’s definitely a confidence booster as we kept winning.”

Joe Solomon, an assistant coach for the team who works with the goalkeepers, said the position is hard not just because of the job on the field, but because there can only be one starter. But he said that the players know the business of the sport and that the coaches will make changes in order to field the best possible team.

“There’s only one spot, everybody else has three,” Solomon said. “It’s very competitive. But when it comes to practice or game day, they’re very supportive … they want each other to do well and, ultimately, whoever plays in the game, they just want the team to do well.”

Thornton said he has no hard feelings toward his teammate. He said that losing his spot was a difficult situation to get through, but he is still good friends with LaForty and wants to see him succeed.

“I can’t lie, it’s not easy,” Thornton said. “I’ve had to mentally reconcile that a lot and just deal with it, and also at the same time be really supportive. At the end of the day, it’s a team sport, and I love [LaForty] to death. He’s a great kid.”

Long credited Thornton and sophomore Charlie Paras, the other goalkeepers on the roster, for being motivating presences to LaForty. Long said LaForty could have easily been the one in the game to let in 10 goals in one quarter, so he hopes his goalies know either of the backups could take over in a game as easily as it happened to get them in.

“Without guys breathing down your back, you’re going to get very complacent,” Long said. “You can’t get complacent in goal, or you’re not going to be in there much longer.”

LaForty, for his part, has not been getting complacent. He said he knows his spot on the team, and more importantly, he knows his role on game day is important to the success of the program.

“As a goalie, of course, stopping the ball is the first order of business,” LaForty said. “But … no matter how many saves you make, if you can’t get the ball past the midfield line to your offense, there’s not much you can really do.”

LaForty and the rest of the lacrosse team have just one more regular–season game that will decide their postseason fate. The team is currently tied in Liberty League standings with Rensselaer Polytechnic Institute, so the winner of their matchup April 30 will decide who gets to keep playing.

Regardless of how many more games the team plays, Long said he has been impressed with how LaForty has played this season, especially considering how long it has been since he last had a consistent starting job.

“I don’t think he’s had a bad game,” Long said. “He sees a lot of shots, makes some really great saves, so I think he’s making up for a lot of lost time.”