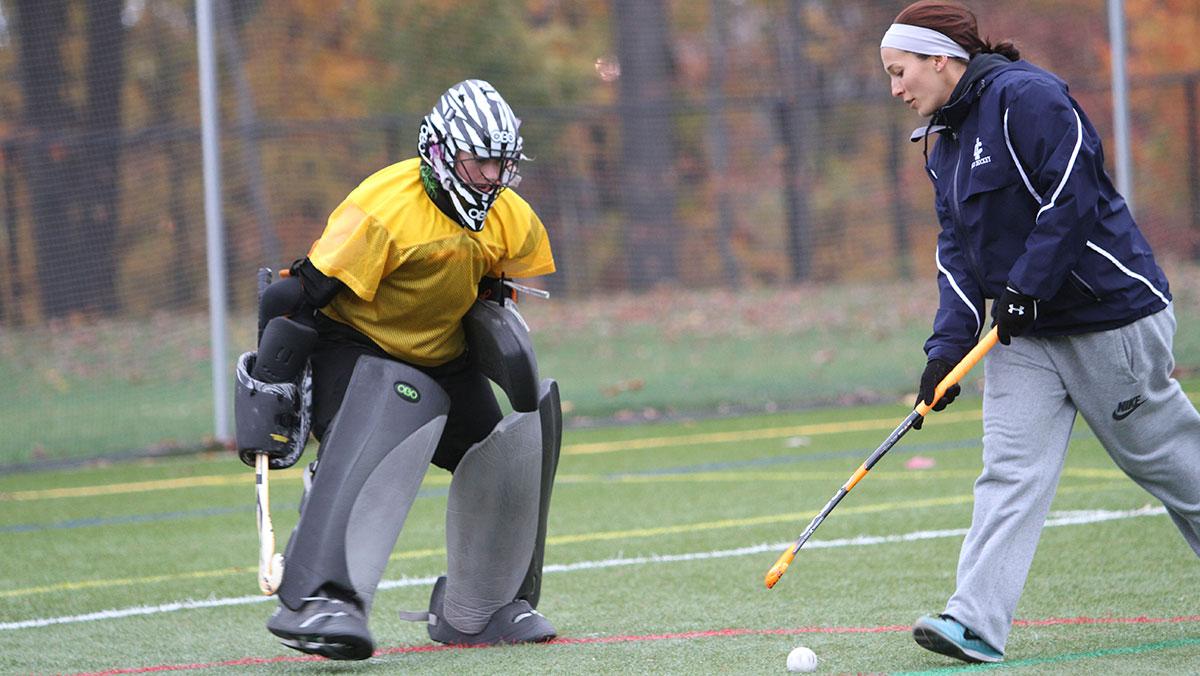 Kaitlyn Kelly/The Ithacan
Junior goalkeeper Katie Lass goes head-to-head with an assistant coach during the team's practice on October 23, 2014, at Higgins Stadium. She studied abroad in Australia during the spring semester of 2015.
By Kristen Gowdy — Senior Writer
Published: August 31, 2015

Katie Lass was home for Thanksgiving break last year when she got the letter.

“I was with my mom, and I got an email,” she said. “I was really excited, freaking out.”

It brought the news she had been waiting all semester to hear: She had been approved to study abroad in Sydney, Australia, through the Institute for the International Education of Students Abroad program, during the spring semester of 2015.

But even as the junior goalkeeper celebrated with her family, she battled with yet another decision. Last season, Lass played every minute of all 20 games in the net for the field hockey team, and she wondered how she would maintain her technique and stay in shape for the upcoming season.

She knew competing in field hockey while abroad was a viable option. The University of New South Wales, where Lass would be studying, has fielded a team since 1953 and would provide her with an opportunity to play while overseas.

“I thought about it before I went, but I wasn’t sure,” Lass said. “I didn’t want to bring my whole entire bag over.”

The extra pads and equipment required for Lass’ position made her decision more difficult. But eventually, she said, she chose to bring her field hockey bag.

“I just showed up and told them I wanted to play,” Lass said. “They ended up putting me on a team.”

At the tryouts, Lass caught the eye of one of the program’s coaches, David Mike.

“I favored Katie, as I have a deep connection with field hockey in the USA,” Mike said. “I coach at summer camps and have for many years. So I have a good understanding of the sport in the USA, as well as a respect for the skills and application of players there.”

Mike, along with the other program coaches and coordinators, placed Lass on the third-highest of six teams, though Mike said she likely could have competed at a higher level.

“It was taken into account that Katie was there for a semester only,” Mike said. “Katie is a more-than-capable goalkeeper who could have played higher, but was not there for the whole season and did miss some trainings and games due to her studies and travel, so third team was considered the best option for her.”

As the season — which runs from Easter until the end of August — progressed, Lass said she found other differences between American and Australian field hockey that were larger than just the minor terminology variations.

For instance, teams were not restricted to students at the university. On Lass’ team, Mike said, the athletes’ ages ranged from 14 to 45 years old. Lass added that some of her teammates had children of their own.

“The way it works, it’s more like a club,” she said. “It’s not like ‘I’m an Ithaca College student. I play for Ithaca.’ It’s more like you can play with anyone.”

Moreover, in Australia, Lass said, field hockey is more gender-inclusive. Where in the United States it’s predominantly played by women, Lass said it was more common in Australia to see men playing.

“The coolest thing I saw there was probably this boy, he was probably 6 or 7, and he was going around and playing at the turf we were playing on,” she said. “It was really cool to watch him. I’ve never seen a kid that young playing and really enjoying himself.”

Lass spent the semester playing for the team, which practiced on Thursdays and competed on Sundays. While she said competing abroad helped her with her original goal of staying in shape, it also helped her improve her game.

And now that she’s back with the Bombers, training for the team’s first match Sept. 1, she said she feels confident heading into the season, largely due to her experiences in Australia.

At one of the team’s preseason practices, head coach Tracey Houk divided her field players into three groups and had them shoot at Lass, who was in her usual spot in front of the net. Taking turns, three lines of Bombers fired shot after shot at the goalkeeper.

“We’ve been starting her off at her usual pace, and we just have expectations of her to continue to do what she does,” Houk said. “I’m honestly not worried about her.”