Junior guard climbs the ranks of the women’s basketball team 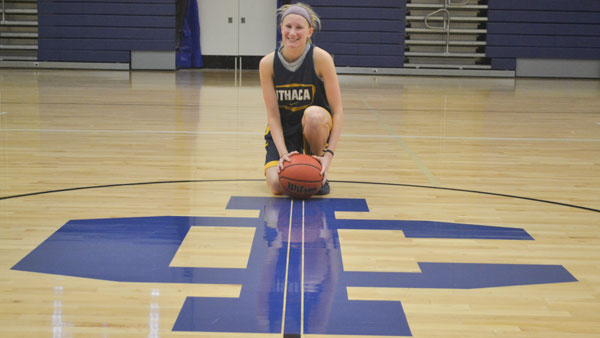 As junior guard Samantha Klie continues her playing days on the women’s basketball team, she has finally claimed a spot in the starting lineup. Her collegiate career started with not making the varsity team and endured playing with a broken hand. Her journey has culminated into a childhood dream of competing for a national championship.

For the Klie family, basketball is a staple. Engraved on a wooden slab in her basement are the words “We interrupt this marriage to bring you the basketball season,” given as a gift to Klie’s parents after their wedding.

As a former New Jersey State Championship–winning coach for the Waldwick High School women’s basketball team in Waldwick, N.J., Robert Klie took over a squad that consistently produced losing records until his arrival. When he retired from coaching in 1995, his love of the game spread to his family members, though Sam said she never felt basketball was an obligation. Instead, she said, it was a personal obsession.

“I would go to my older sister’s games, and I’d pray that they wouldn’t have enough kids, and I’d have to play,” she said. “I’d just happen to show up in my sneakers. It was never something I felt pressured to do, which is something a lot of people have wondered because my family is so into it.”

Robert Klie said he believes Sam benefitted from having a four-year gap in age with her sister Elissa. They were able to practice with, but not play competitively against, each other.

“Sam always wanted to be like Elissa, and she was four years older, which is perfect spacing in that it was a large enough gap where they didn’t compete with each other,” he said.

During her senior year, Klie received offers from Skidmore College and Emory University but chose to follow in the footsteps of her sister Elissa, who was an All-Empire 8 selection as a senior in college, and opted to join the South Hill squad and be part of a Division III national contender.

“I wanted to go to a college where [competing for a national championship] would be possible,” she said.

When Klie began her collegiate career in 2011, 10 incoming freshmen were competing for four varsity roster spots, so the odds were already stacked against her. Klie’s said her worst fears came to life when head coach Daniel Raymond called her into his office to inform her that she would start the season playing with the junior varsity team. Klie said the news was devastating.

“The thought of not being on the varsity team was honestly the most painful thing I’ve ever had to go through,” Klie said. “It made me want to go to the gym and practice all night and never touch a basketball again, all at the same time.”

Robert Klie said he believes that week was especially tough for his daughter because of what had transpired at the newly built Athletics and Events Center.

In the end, however, Klie did not end up playing a single game as a junior varsity player. An abundance of injuries decimated the Bombers’ varsity squad, beginning with then-junior forward Devin Shea ’13, which left an opening varsity spot for Klie. Later in the year, injuries to two point guards, senior Elisabeth Wentlent and Jacqueline Shinall ’12, kept Klie in the Bombers’ rotation off the bench.

As a result, Klie finished the season having played the most minutes of any freshman, competing in all but two games. She led all freshmen on the team in assists and steals, and it was her tenacity on defense that led to a greater role on the team in her sophomore year.

“As a point guard, she is definitely a distributor, but one of the most important things she does for us is her defense because she generally [guards] the team’s opposing point guard,” Raymond said.

However, it was also that same tenacity that caused her to initially turn a blind eye on a severe hand injury.

Following an ankle injury to then-junior starter Wentlent in the 2012–13 season, Klie received her first opportunity to start a game against St. John Fisher College. On the first team practice following Wentlent’s injury, Klie broke her hand, but it wasn’t until two weeks later that her coaches found out.

“That was my first practice as the starting point guard, and I was going to start the next game, and in my eyes it was my chance, and I was pumped,” Klie said. “So I told myself not to think about my hand.”

Klie started four games with her broken hand, and the results were mixed. The Bombers won three of those four games, but Klie had 19 turnovers and only 12 assists in that span. At that point, the coaches took her in for an X-ray and discovered the broken hand.

Last season, Klie only missed four games and ranked third on the team with 60 assists. She was an integral part of a Bomber team that finished 13–1 in Empire 8 conference play that year.

Coming into her junior year, Klie was initially viewed by coaches as the team’s sixth man, an important player off the bench. Klie said she had a difficult time accepting the role at first.

“I wanted to make a difference, so coming off the bench is always a bit of a tough position for any basketball player, but I adjusted to it,” Klie said. “It became something that was easy. I could gauge what the other team was doing in the game, whereas if you’re starting, you might not be ready for everything.”

For the first five games of the season, Klie helped the Blue and Gold earn four wins and only one loss.

Following a win against SUNY Cortland at 8 p.m. on Dec. 3 in Ben Light Gymnasium, Klie was inserted into the starting lineup. Coach Raymond said he believes Klie can change the pace of the game with her defensive prowess.

“The defense she plays initiates how she plays on offense as well,” Raymond said. “She provides energy and increases the tempo of the game.”

Since Klie has started for the Blue and Gold, the team is 8–3 but has been facing stiffer competition compared to the beginning of the season, with six of these matchups being against conference opponents.

With five seniors leaving the team next season, Klie said she understands that she’ll need to assume a greater leadership role in the near future.

“I like being in leadership roles,” Klie said. “I’ve always been better at that, so I think I’m going to have to step it up, and it would be a comfortable place for me in that [role]. I want to step up on the basketball court and become more of a scoring threat to make up for losing a lot of [seniors]. I want to be someone everyone feels comfortable talking to and someone people look up to.”

As for this season, senior guard Mary Kate Tierney said she shares her teammate’s expectations for the squad and believes Klie will have a large part in bringing the team success.

“With Sam’s positive attitude and work ethic and the way she’s playing recently, she’ll be huge into getting us all the way to the National Championship,” Tierney said.