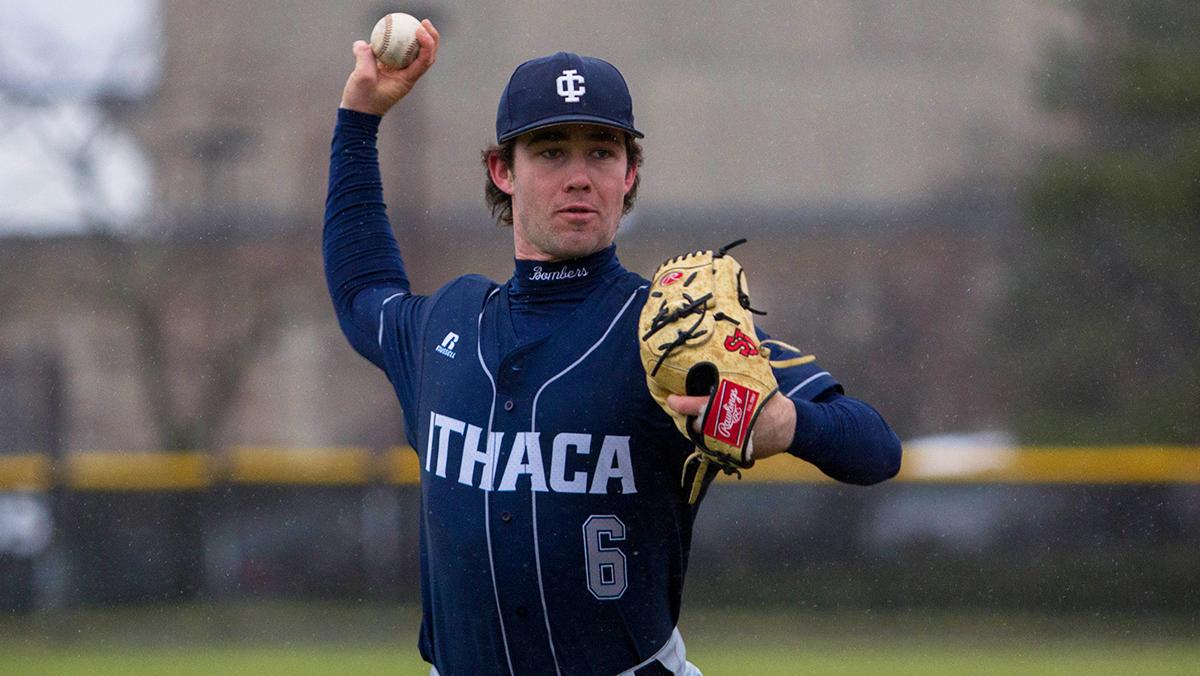 Junior transfer student Jack Morello can be found this spring on the mound of Freeman Field, pitching fastballs and changeups for the Bombers. This hasn’t always been the case, though. Born in Manhattan but raised in Los Angeles, Morello has crisscrossed the country all his life, changing colleges multiple times but playing America’s favorite pastime all the while.

After graduating from Notre Dame High School in Sherman Oaks, Los Angeles, in 2013, Morello committed to Gonzaga University, an NCAA Division I school in Spokane, Washington, to play baseball. Morello then suffered a left shoulder injury from lifting and decided to redshirt his freshman year, allowing him to practice with the team and attend classes while not using up one his four years of athletic eligibility. He then lost his scholarship to Gonzaga.

While he could have stayed on the team, Morello viewed this as a new opportunity and instead transferred to Glendale Community College in Glendale, California.

This change allowed Morello to be closer to his hometown and rehab and to work with a familiar face. One of the associate head coaches at Glendale, Alex Kocol, knew Morello from middle school, making the transition easier.

During his time at Glendale, Morello’s mom moved from southern California to New York, which prompted him to start looking at schools on the East Coast.

After doing some research, Morello transferred once again, this time to St. John’s University, another D1 school. While at St. John’s, a coach that had previously recruited Morello told him that he would be on the roster but would see little playing time. After one semester, Morello decided he would rather get more playing time than stay in a D1 program.

At first, making that decision wasn’t easy for him. Morello wanted to stay at St. John’s because, he said, he was committed and did have a good fall semester, in terms of baseball. In the end, he said, he thought it was best to transfer.

“I figured it would be best to use my talents and what I’ve been working for,” Morello said. “I might as well get more bang for the buck.”

Morello heard about Ithaca College through his dad and decided to check it out.

After visiting the college and meeting with Bryan Roberts, associate dean of the Roy H. Park School of Communications, Morello was sold on the communications program and the school.

Morello recalls telling his father that this is where he belonged.

While going from a Division I athletics program to Division III might dissatisfy some athletes, Morello said he is content with his decision.

“As far as the glory and hype around Division I baseball, I think it wears off after a year because you realize there are great baseball players at every level,” Morello said.

While Morello is content with his decision to represent the Blue and Gold, there are many differences from his previous schools and athletic programs. Coming from southern California, there is a big difference between the amount of baseball that athletes are able to play due to weather conditions.

For the most part, though, the transition has been smooth. Morello said he enjoys the facilities the athletics program has to offer, as well as the coaching staff and his new teammates.

The coaching staff, specifically head coach George Valesente, had a big impact on Morello’s choice in the first place. Morello credits Valesente as being nice and having an intricate and curious baseball mind, allowing him to be as successful as he has been for so long.

When Valesente first heard about Morello, he was initially intrigued by his past and the programs he played for. His track record of schools and baseball programs hinted that Morello had some abilities the Bombers would be able to use.

Valesente said he was worried about Morello’s transition from a Division I program to a Division III program, but once they started working together, the player proved to be hardworking, no matter the circumstances.

“Once we started having our workouts indoors and working together, it became apparent to me that he had a good concept of pitching and a good concept of his abilities and what he had to do to function with certain pitches and things like that,” Valesente said. “I was very impressed with that.”

Coming from the background he has, Morello is a standout player this season.

“He seems to be more experienced as far as a total understanding of his own pitching mechanics and how they work and the functions in the different pitches that he throws,” Valesente said.

He said Morello’s abilities and work ethic have even inspired him as a coach.

“It invigorates me and encourages me to look even deeper at where he’s at and what we can do to make it even better,” Valesente said.

Sophomore pitcher Chris Marinaccio said Morello’s competitive nature and being the No. 1 pitcher on the team has forced the other pitchers to step up their game.

“He set a bar that all the pitchers are trying to reach,” he said. “Being our most talented pitcher, we are trying to work up to be as good as him or pass him.”

Morello said his teammates are the reason behind his successful transition and his outstanding performance as a Bomber thus far.

“The team is a collective unit of great characters and hard working individuals, which made it easy for me to hop right in,” Morello said.

So far this season, Morello has a 2–1 record and has pitched a total of 32 innings. Against Stevens Institute of Technology on April 1, Morello had a career high of 10 strikeouts and a low of one walk.

Marinaccio said Morello’s transition was shaky at first but that now, he fits right in with the team.

It’s important for baseball to staying ahead of other sports in terms of a global game during a Trump Presidency.

American baseball to be a new force in World Baseball Classic