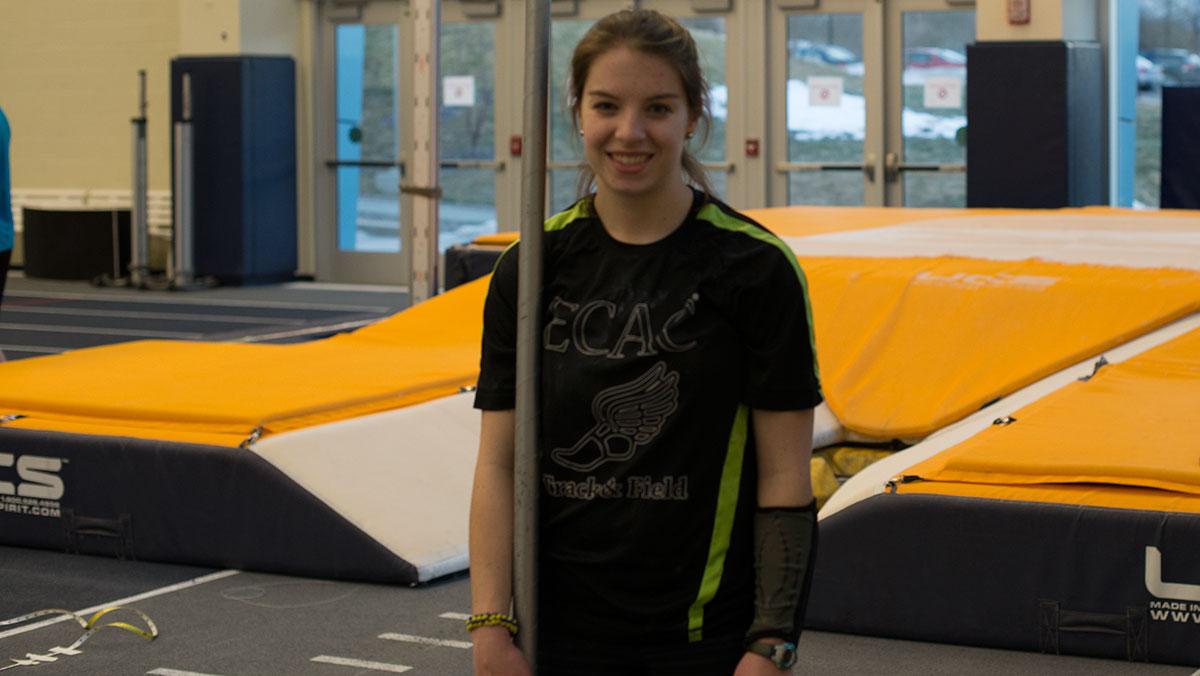 Junior Alex Rechen, a pole-vaulter on the women’s track and field team, placed sixth in the NCAA Championships in Winston-Salem, North Carolina, on March 13 after clearing 3.70 meters, earning her All-American status. She was the first ever Bombers’ pole-vaulter to earn All-American honors and the 94th All-American in program history as well.

This season, Rechen has broken several pole vault records, on both school and conference levels. At the Empire 8 Championships on Feb. 14, she broke the facility record at Houghton College and tied a meet record with a height of 3.50 meters. In addition, she broke her own school record at the Bomber Quad meet Feb. 20 with a jump of 3.72 meters, the eighth-best performance in Division III for the season at the time. After competing in pole vault and gymnastics at Simsbury High School, she came to Ithaca College with an extensive background in the sport.

Assistant Sports Editor Jonathan Beck spoke with Rechen about her All-American performance, her preparation for the outdoor season and her experiences as a pole-vaulter.

Jonathan Beck: What was it like to be named an All-American at the NCAA Championships this past weekend?

Alex Rechen: It was really exciting. It was nice to go down on a Tuesday because it was spring break, so we flew down on Tuesday, got to practice Wednesday and Thursday, and then I competed on Friday, so it was nice to be able to get into the zone in the facility before we actually competed. We got there and it was all about the field events for a while, they didn’t start the track events until 1:30 [p.m.] and I started competing at 11 [a.m.,] so that was a nice change that everybody that was there actually cared about what was going on and instead of just watching what was going on on the track.

JB: What does it mean to you to be the first ever pole vault All-American for the college?

AR: When I first qualified for Nationals, my coach told me that she was thinking about all the people that she had taken to Nationals and what event she hadn’t taken, and she was like, “pole vault was the only one left,” and then I started crying. So I went into this meet not expecting anything. My goal this year was to just go to Nationals. All-American wasn’t even something that was in my mind.

JB: Did you train a certain way once you realized you could have a chance to get to Nationals?

JB: How do your goals change for outdoor track and field now that you can compete with the best pole-vaulters in Division III?

AR: At the very last meet last year, that was when I set my first school record, but that’s still 17 centimeters less than what I am jumping now, so I guess I just want to improve that. My indoor season wasn’t very consistent, so I think that’s something that I’m working on to try and make sure that I’m jumping relatively the same height every meet and trying to get them more on first attempts instead of third because I was making a lot of third attempt clearances this year and it wasn’t exactly what I had hoped for, so I think I can do better than that.

AR: The biggest difference for pole vault is just the sheer weather. Pole vault is the only event that can get moved inside due to weather and it will still count for an NCAA qualifying mark because it’s not safe to vault in the rain because you won’t be able to hold onto the pole or if it’s really windy you could get blown off the mat. So I was moved inside once last year and once the year before that, so it’s just a lot more difficult to stay warm and not get very stiff during the competition. Other than that, it’s the same rules and same everything else for that.

JB: How different is it competing in pole vault in college compared to when you were in high school?

AR: Now, I jump year-round. I only did outdoor track my first three years of high school, and I didn’t start indoor until senior year. Now I start jumping in October, and then I compete through the end of May and then I’ll do club jump at home — or this summer I’m probably going to stay here — and then I only have a month and a half off where I’m not actually pole vaulting, whereas in high school I was only pole vaulting for three months out of the year and then I was a gymnast for the other nine months. So that’s the biggest difference. In terms of competitions, it’s nice that most of our competitions occur on the weekend so that we can separate academics and athletics.