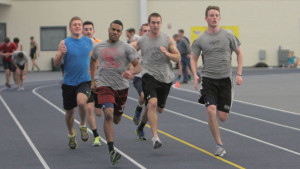 From left, juniors Kevin Davis, Rashaad Barrett and Ty Curtis run down the backstretch during an interval workout at the men’s track and field team’s practice Jan. 27 in Glazer Arena. Jillian Flint/The Ithacan

The first meets of the men’s track and field season have proved that junior sprinter and long jumper Rashaad Barrett is one of the Bombers’ best athletes.

An exercise science major, Barrett recently established a college record and continues to meet ECAC qualifiers. However, competing on the collegiate track was not what he had in mind when he was in middle school.

“I started back in middle school,” Barrett said. “I was going for football, actually. I did not make the team, but my brother was really pushing me to do the sport and told me, ‘Why don’t you do track so you can get faster and can play football next year?’ I started running track, and I ended up loving it.”

Barrett broke an Ithaca College record in the 60-meter dash at the Cornell Relays on Dec. 7 with a time of 6.95 and was named Empire 8 Men’s Track and Field Track Athlete of the Week two days later.

“I was not expecting to do it, especially at the very first event of the season,” Barrett said. “I was just trying to run a good time and compete as well as I can. Then after the finish line, I looked at the clock, and I saw the time. I was kind of shocked. I did not jump around. It took a while for me to say, ‘Yeah, I really did that.’”

Right after Barrett broke his record, several friends reached out to Orenstein to notify him of the accomplishment.

“Honestly, 15 people texted me or Facebooked me that day, excited to see my record fall,” Orenstein said. “I was just like, ‘Come on guys, you’re being mean now.’ I’m happy for Rashaad, but I would be a liar if I said I wanted [my record] broken.”

Barrett joined the men’s track and field team as a freshman, however, he only recently hit his stride. He said there is no secret behind his improvement, and he simply included weight lifting in his regimen.

Head coach Jim Nichols said Barrett’s and other sprinters’ improvements are also because of the teams’ modern facilities.

“I believe [this improvement] is a product of the environment we work with at the A&E Center,” Nichols said. “We have strength training coaches that help us. We have a scheduled block three days a week for our team.”

Orenstein and his teammates were among the last Bombers who graduated before getting to reap the benefits of the new facility, which was completed in the summer of 2011.

“I have supreme jealousy for those who are able to use it,” Orenstein said. “Everything was worse back then for training, and everything now is amazing.”

Nichols said Barrett is becoming one of the leaders of the team. However, leadership does not come without hardships. Barrett said he considered quitting the sport one year ago.

“Last year after winter break, I actually stopped running for two weeks for personal reasons,” Barrett said. “I did not want to stop running, but I felt like that was the best thing for me to do to clear my head. Shortly after, I realized it was not the best decision because I was still stressed out, and I missed it.”

Barrett said track is an important aspect of his life and that he has developed a passion for it.

“I just love competing,” he said. “It definitely helps me in everyday life. If I am stressed, I go to practice and I forget about everything.”

Nichols said he is proud of having Barrett and believes he can reach higher levels of competition and breaking more records.

“He is a talented young man,” he said. “He has got a very good work ethic, and I am sure he is not satisfied with that record. I am sure he wants to get better and go to Nationals.”

Leadership is also knowing when to help his teammates through advice and setting a strong example to emulate.

“With my teammates, I try to set a good example for them because I want to point them in the right direction,” Barrett said. “My first goal is to help my team. As an individual, my main goal is to make it to Nationals. Making [Nationals] individually can prove that I have the ability to make it to the next level.”

Calm and resolute, Barrett said he knows the importance of mental preparation.

“I do get nervous before races, but I say to myself, ‘You’ve done this an enormous amount of times, you know how to run it, don’t worry about it,’” he said.