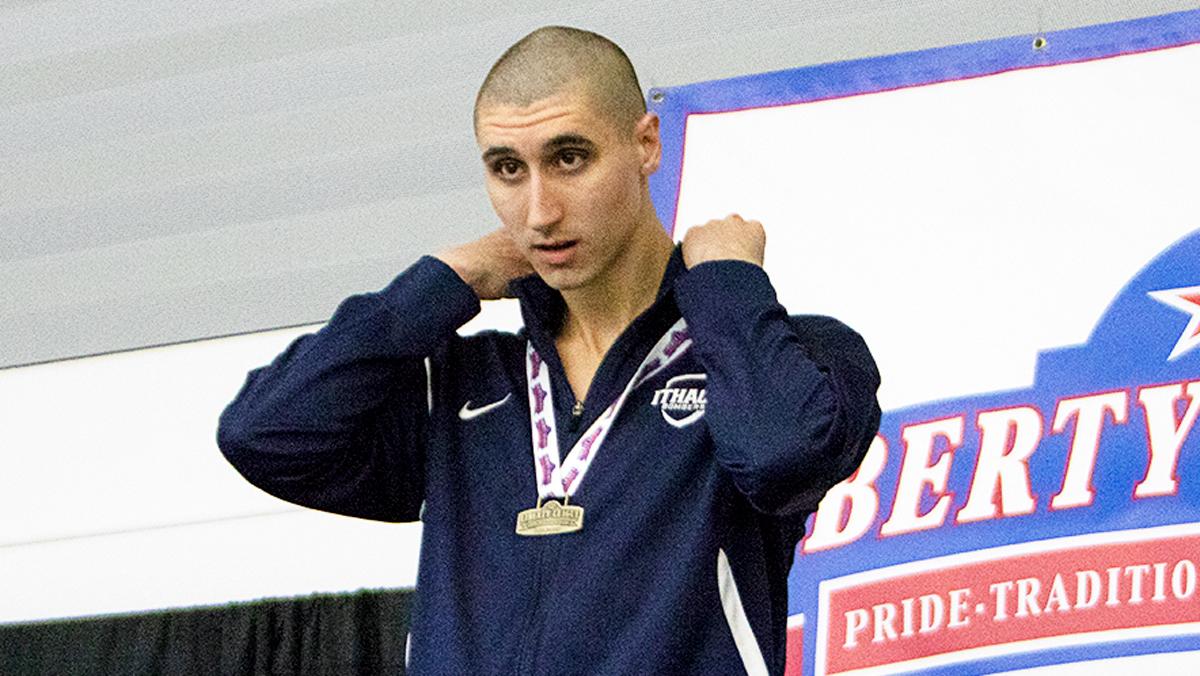 Junior freestyle swimmer Stanley Zaneski has been dominating in the Liberty League for the last three years on the Ithaca College men’s swimming and diving team.

He has continued his success in the 2019–20 season. Though he did not compete in the squad’s Nov. 9 meet due to an injury, Zaneski has won at least one event at every other meet so far. He is the team’s leader in the 50-yard freestyle by approximately two seconds with his time of 21.41 from Oct. 19.

Contributing writer Mark Puskey sat down with Zaneski to discuss his college career and his outlook for the season.

Mark Puskey: When did you first start swimming?

Stan Zaneski: I first started swimming my freshman year of high school. My father had tried to get me into sports my entire life. I did football, baseball, basketball — pretty much everything. I did karate at one point. I hated every single one. It had come to a point where I had run out of sports, and it came to freshman year of high school. My dad was like, “All right, you need to be doing some sort of extracurricular. You either have to start working, so you can get that experience, or you do a sport.” I was like, ‘I don’t want to work.’ So the last sport to try was swimming, and I just stuck with it. I hated it though. I didn’t start enjoying it until senior year of high school. I moved teams, and it was just a better environment, and here I love it.

MP: What do you think of the team this year compared to past years?

SZ: This year’s team is just great. Every year since I’ve been here as a freshman, we’ve gotten more people. We’ve just improved and improved more. This group of freshmen, in particular, I love those kids so much. They are really hard workers. They are generally really nice people. They come to practice ready to train hard. They always have a good face. They’re always ready to go. They push themselves hard in meets. It’s just great to see them go.

MP: What has been your most memorable meet in college?

SZ: I’d say probably my freshman year at the conference meet. It was the last meet of my freshman year, and I just remember getting into it. I won the 50 freestyle as a freshman, and I remember I was on the podium and everyone started chanting “He’s a freshman,” and I really enjoyed that. There was another time that I actually liked more when I swam the [200] free. [It was] the first or second time I ever swam it, and I put down a decent time, and [head] coach Kevin [Markwardt] was ecstatic. He was going crazy, going, “Oh my god, it’s incredible,” but it was only a decent time. It wasn’t that fast. He was just super excited about that.

MP: What did it feel like to break the school record?

SZ: Funnily enough, I was actually kind of mad about that. I was not going for the 100. I trained since October of last year where I went, “All right, it’s crunch time. This entire year is going to be focused on breaking the 50 record.” I tied it, which is kind of ridiculous because I got it exactly tied, which is really uncanny. That was my whole goal of the year, and I was really bummed out about it. I ended up switching a bunch of relays the next couple days to keep going for it, and I got slower every time. I swam the 100 freestyle in the prelim, and I swam a second away from the time. But right before I swam that, one of my teammates, [senior] Nick Bonnabeau, said, “Yo, how funny would it be if you went and broke the 100.” I looked at the prelims and thought, “Holy crap, I can do that.” Then I went into finals, had a really great race, got the record and I was so excited. It wasn’t what I was going for, but it was still the same feeling. I didn’t expect it to be so overwhelming — I ended up crying. I was emotional the whole meet for no reason. I’m excited to do it again. I want to do it again.

MP: What are your goals for this season?

SZ: My goals for this season are actually breaking the 50 record, rebreaking my 100, and I’m also going to be going for the 200 freestyle record as well. [Last season] I made the B-cut in the 50 and the 100, but I wasn’t fast enough, so I want to go faster than that and actually go [to the national championship] for at least one of [my events]. I’d love it if I could go all three, but that’s a pretty high goal.