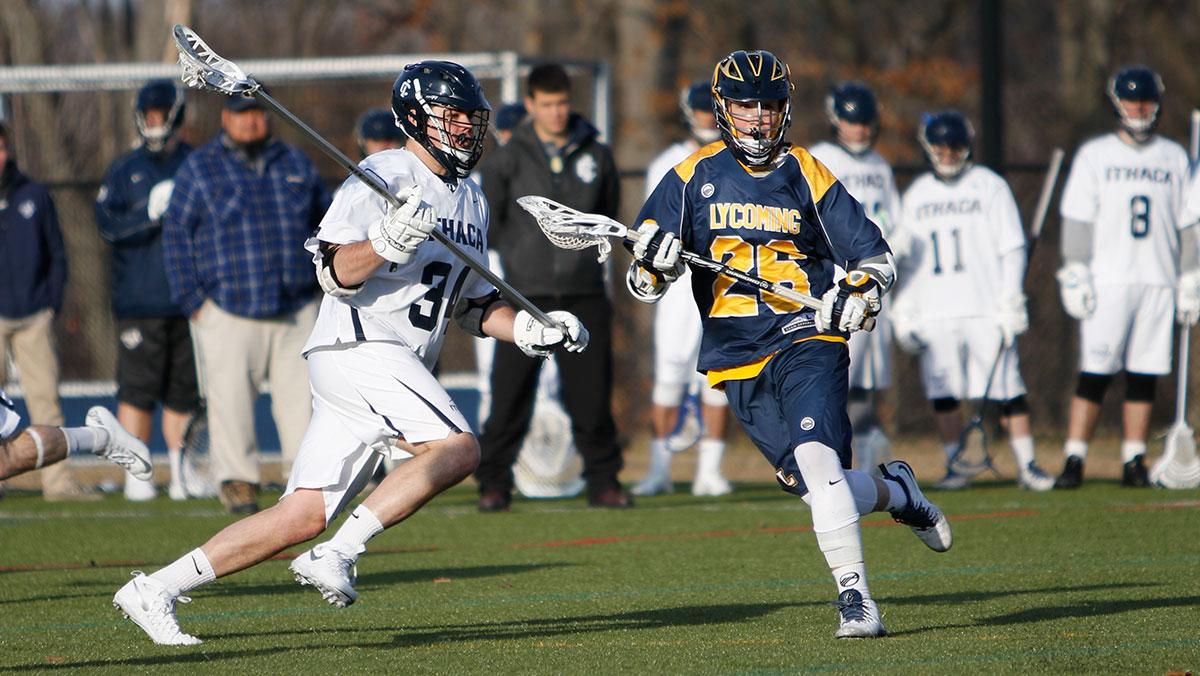 In 1983, Mark Wenham captained the Syracuse University men’s lacrosse team to its first National Championship in an upset win over top-seeded Johns Hopkins University. In 2014, his son, Winston, followed in his footsteps as he embarked upon his own Syracuse lacrosse career.  After redshirting his freshman year, Winston played in one game during his first real season for the Orange, which ended in an 18–5 victory over Hobart College on April 14, 2015.

In 2016, junior Winston Wenham finds himself on a new team at a new school, as he is now a starting defenseman at Ithaca College after transferring to the college for the Spring 2016 semester.

Despite leaving his father’s alma mater, Wenham said, his father was completely supportive of his decision.

An Ithaca native, Wenham said he has been playing lacrosse his whole life. He began playing when he was 5 years old in a youth program before becoming a part of the team at Ithaca High School, helping it win a state championship during his senior year. After he graduated, he spent a year at Northfield Mount Hermon prep school in Massachusetts before enrolling at Syracuse.

Wenham said it was his father’s influence that sparked his passion for the game.

Wenham was recruited by multiple Division I programs, but he ultimately picked Syracuse because he said he felt like it was the best fit for him. However, he said, his decision to transfer to the college sprung from his desire to not have his entire schedule revolve around playing lacrosse. Because of how little playing time he saw in games, he said, the time commitment was not worth the payoff.

“We had to have our entire afternoons free for lacrosse, so I always had early morning classes, and by the time I got home from practice, it was late, and I would have to do my schoolwork, knowing that I would have to wake up early the next morning for class,” Wenham said. “Here, Monday through Friday, I know exactly what two or three hours of my day will be dedicated to lacrosse.”

At Syracuse, he was a management major but switched to business administration when he transferred. Although Wenham said his workload is not that different from what it was at Syracuse, he said not having to devote as much time to lacrosse gives him more time to focus on his schoolwork.

Wenham said he also chose to transfer to the college so he could not only stay close to home, but because he had a strong relationship with head coach Jeff Long.

“I’ve known Coach Long my entire life. He and my dad are very good friends, so it was easy to talk to him about coming here both academically and athletically,” Wenham said. “There are also a few guys on the team that I went to high school with, so I had some familiarity with the team.”

Long said he did not expect Wenham to mesh with the team as quickly as he did, but his prior knowledge of the team made it easier.

“I never know what will happen with kids who transfer at midyear because that’s a really hard transition because most of the team has been together for the whole fall semester and know each other very well at this point,” Long said. “He’s done really well with this transition so far because he’s been around here before, so he knows some of the guys already.”

Senior defensive Eli Gobrecht, who started playing lacrosse with Wenham in elementary school, said he enjoyed finding out his former teammate was coming to Ithaca.

“I was excited when I found out he was coming. I’ve known him for a long time, so we are pretty familiar with each other’s style of play, and we complement each other nicely,” Gobrecht said. “I was very excited to get a chance to reunite with an old teammate.”

Wenham said while the level of competition may not be as high playing for the Division III Bombers as it was playing for Division I Syracuse, his attitude has not changed, and he is still being challenged.

“The practices are still really hard,” Wenham said. “Coach Long likes to run a lot in games, so we need to do a lot of conditioning to stay in shape.”

Long said because he came from a Division I program, Wenham should have the skillset to make an impact for the Blue and Gold this season.

“He was mostly on the scout team while he was at Syracuse, so he was going up against some of the best attackmen in the country every day, and that can only make you better,” Long said.

Gobrecht said Wenham will be a strong addition to the team.

“He is a good, solid defenseman who can handle the ball well and also push it in transition, so there are many ways that he can make this team better,” Gobrecht said.

While his former team is currently ranked third in the nation for Division I, Wenham is happy with his decision to transfer both on and off the field, and he said he plans on joining other activities in the fall.

“I’m really enjoying the Ithaca lacrosse experience so far. I think we have a strong team that can make a deep run in the NCAA tournament,” Wenham said. “I really feel at home here because everyone is super nice and friendly, and they’re always interested in meeting new people, which is good for me.”