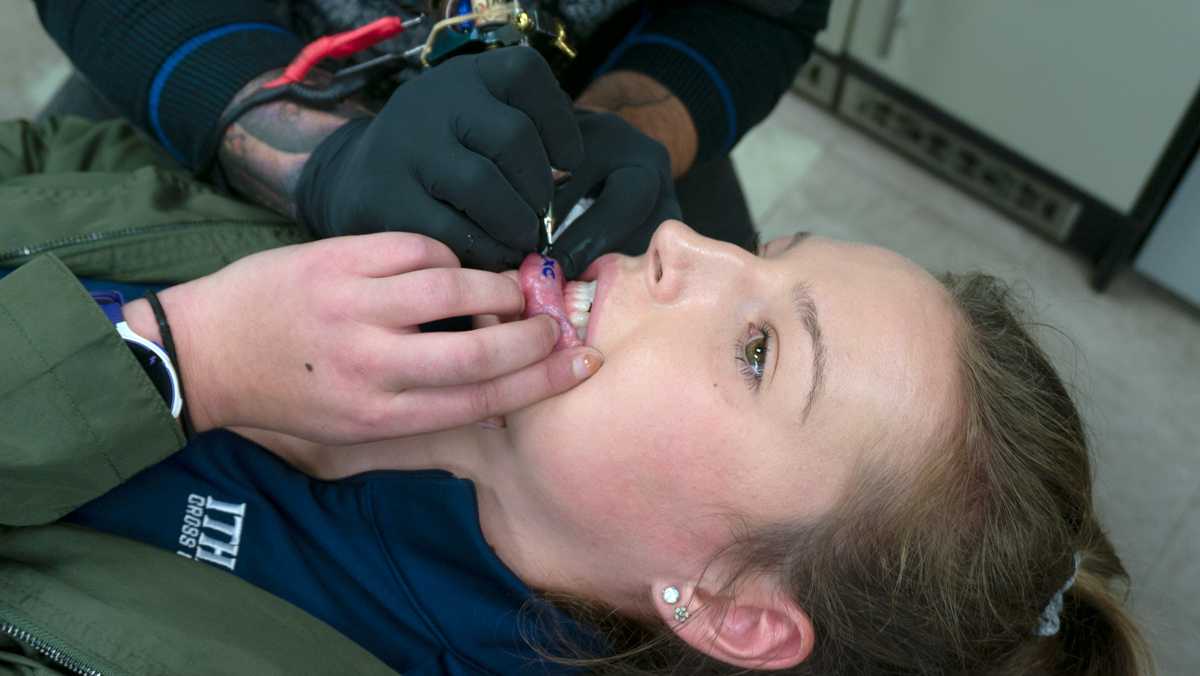 SABRINA CHANG/THE ITHACAN
Junior Lindsay Scott gets her lip tattooed at Medusa Tattoo Studio on Nov. 3. Members of the team get "ICXC" with a stick figure runner on the bottom of their lip.
By Dani Pluchinsky — Sports Editor
Published: November 5, 2018

Freshman runner Lauren Lobdell sat in a chair as her teammates stood circled around her. As she heard the buzzing of a needle, she pulled her lip down to show the inner part of her mouth. Fortunately, this was not a team hazing ritual — Lobdell was participating in a 10-year-old tradition for the women’s cross-country team: She was getting a lip tattoo.

Every fall, new team members or returning team members without the tattoo have the option to get it done. This year, eight women got the tattoo for the first time and four got theirs retouched. The appointment was held at Medusa Tattoo Studio in Ithaca on Nov. 3, which was the Saturday before the team competes at the NCAA Regional Championship.

The tattoo is the same for each athlete — “ICXC” is printed in black ink on the inside of their lower lip, with some people adding a tiny stick-figure runner as well. Senior captain Amanda StClair said she thinks lip tattoos are a better option for the team than getting regular tattoos.

“The bottom line is, it is not visible,” StClair said. “It’s a really good way to show spirit, and it’s pretty badass. You pull your lip down before the starting line to take a picture, and other teams are like, ‘Whoa, they’re intense. Like, we’re going to lose to them,’ so it adds an intimidation factor too.”

StClair said the tattoos cost $60 each, and the runners get them at Medusa’s every year. However, not everyone on the team is required to have one, and it is everyone’s individual choice to get one or not. The team normally makes an appointment that lasts hours so that members of the team can cycle in and out of the studio. StClair said everyone normally goes, even if not everyone is getting a tattoo.

Typically, lip tattoos last to up to five years and fade quicker than tattoos on other parts of the body. StClair said that hers has lasted for the past four years but that other runners needed to get theirs retouched a couple months after they got it.

The pain? It varies. StClair said that it hurt when she got hers done, but freshman teammate Zoe Hadley said hers hardly hurt at all.

StClair said the healing process for lip tattoos is different than for other tattoos.

“Because it’s already moisturized, there is no healing process,” StClair said. “It’s like having ointment on your tattoo constantly because it’s mucus and saliva.”

Hadley, whose lip tattoo was her first tattoo, said she thinks that getting the lip tattoo speaks to the overall culture of the team.

“It’s something that brings you together, and it’s fun to all have that symbol,” Hadley said. “It’s in such an inconspicuous place, and you only show it when you want to. Just knowing you have it is a symbol of dedication to the team, which is really nice.”

Lobdell said she was surprised by the closeness of the team when she first started the season. When she first heard about the tradition at the beginning of the year, she said, she was hesitant to get the tattoo but decided to get it later in the season because of how much the team matters to her.

“I didn’t expect us to be this close in only a couple months,” Lobdell said. “They’re so awesome. We just want a part of the team on us. It’s kind of just a part of you but not something that other people will see, which is really cool.”

Head coach Erin Dinan, who does not have a lip tattoo, said that keeping up with traditions like this will lead to better relationships within the team.

“I think it’s really important for the team to feel connected with each other,” Dinan said. “What’s been really cool is how connected and close-knit this team is. This has been one of the most close-knit teams I have ever coached.”

StClair said she thinks the tradition of getting lip tattoos will continue.

“I know it will because this is the most high-quality team ever,” StClair said. “Every single person on the team is so dedicated to each other and the team and traditions and everything. For a lot of people, it’s their first tattoo. It’s a really noncommittal way to get a tattoo.”