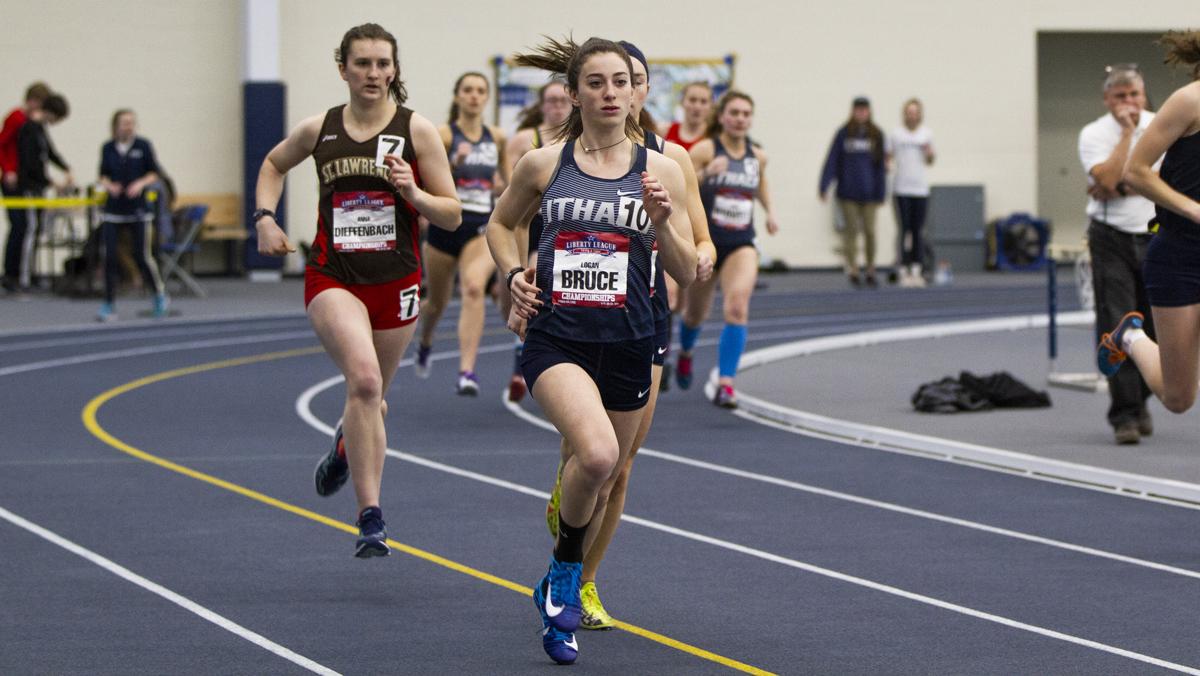 JULIA CHERRUAULT/THE ITHACAN
Freshman Logan Bruce competes in the 800-meter run at the end of the pentathlon during the Liberty League Championships on Feb. 22. Bruce is currently ranked No. 16 in Division III in the pentathlon.
By Ryan Lemay — Staff Writer
Published: February 26, 2019

Freshman Logan Bruce is one of the top track and field athletes in Division III, but she didn’t experience a straight line to her current success. Bruce spent years dedicated to basketball, competed at a high school with limited athletic resources and was offered Division I track scholarships before finding her place with the Ithaca College program.

Bruce is currently ranked No. 16 nationally in the pentathlon and No. 17 in the long jump. She also took first at the Liberty League Championships on Feb. 22 and 23 in the pentathlon and second in the 60-meter hurdles and long jump. She received offers to run track at Division I schools Stony Brook University and Binghamton University, as well as Division II Mansfield University. However, she chose the college because she wanted to be recognized as more than just an athlete.

“Of all of the schools that I looked at, I felt that Ithaca was the only one who valued me as a student, person and athlete all equally,” Bruce said. “I was offered money from the Division I and II schools to run, but I didn’t feel at home there, and I did at Ithaca.”

Bruce attended Delaware Academy, a small high school in Delhi, New York, with just under 400 students. Her team had only 2 coaches, a distance coach and a sprint coach, meaning that Bruce received no specialized training for any of her field events or for hurdles. So, she decided to take matters into her own hands to become a better athlete. She found drills to do by herself online and stayed late at practices to perfect her techniques. Bruce said that attending a small high school taught her a valuable lesson: She would have to work harder than most in order to achieve her goals. Those goals, however, did not always involve track.

“At first, I started doing track to help me stay in shape and get faster for basketball and soccer,” Bruce said. “I wanted to play basketball in college until about halfway through my junior track season.”

Bruce dedicated 10 months out of every year to playing basketball and had often envisioned herself playing college basketball. She said she found her passion for basketball through her father, who coached her from a very young age. Bruce played on elite Amateur Athletic Union club teams and in summer leagues but said she found she only truly loved basketball when it was under the coaching of her dad.

She rediscovered the passion that began to dwindle in her basketball career in the form of track. She was attracted to the individual nature of the sport and decided that she would be the happiest pursuing it in college. However, Bruce said she does not regret any of the time and effort she put into basketball and soccer.

“I think focusing on one sport all the time could cause you to essentially burn out or get sick of the sport after so many years of focusing on one thing,” Bruce said. “I think that the agility, coordination and speed of the other sports helped me with track.”

As Bruce has made her transition to collegiate track, she said that one of the biggest keys to her success has been senior Catherine Larkin. Larkin competes in the pentathlon like Bruce and has taken her under her wing in regards to training and getting adjusted to her new life.

“Having Logan to train with this year has been a blessing,” Larkin said. “My first three years on the team, I didn’t really have a set training group because not many of my teammates consistently completed the pentathlon.”

The relationship between Bruce and Larkin has extended beyond just the track. Bruce lived with Larkin during the winter preseason, an experience which helped her not only acclimate to collegiate track but to college in general. She said they prepared meals together, spent quality time bonding and were able to connect beyond their athletics.

A significant transition for Bruce on the track this year has been the adjustment to competing indoors. Coming from a small high school, Bruce did not have the opportunity to race during the indoor track season before coming to the college. Indoor tracks are typically 200 meters instead of 400 and have tighter corners that can be challenging. Short sprinting distances are also reduced from 100 meters outdoors to 60 meters on the smaller indoor tracks.

“Running on an indoor track has mainly been about adapting to the different size of the track,” Bruce said. “Indoors, the number of hurdles is less, so I have had to become faster in that particular race to compete at this level.”

Along with hardworking teammates, Bruce has been impressed by the coaching staff for the women’s track team. Compared to her high school’s meager staff, Bruce said the numerous and highly knowledgeable assistant coaches have been a huge asset for her. The Bombers’ coaching staff is equally excited to work with Bruce.

“She was highly sought after by many programs,” head coach Jennifer Potter said. “We made sure that she knew we were interested. Coach [Mary] Wallenbeck even went to watch her play basketball one night. When she visited, we knew confirmed that not only was she a great student — a great athlete — but a really great person.”

Bruce is only getting started with her collegiate track career but has high aspirations for her future as a Bomber. Just as she did in high school, Bruce plans to stay positive and always give her best effort during practice and in meets.

“I go into every meet with a mindset that I want to be a competitor, and even if I don’t win, I want to improve on my weaknesses,” Bruce said. “My individual goal this season is to go to nationals and prove that I am able to compete with the best athletes in the nation.”