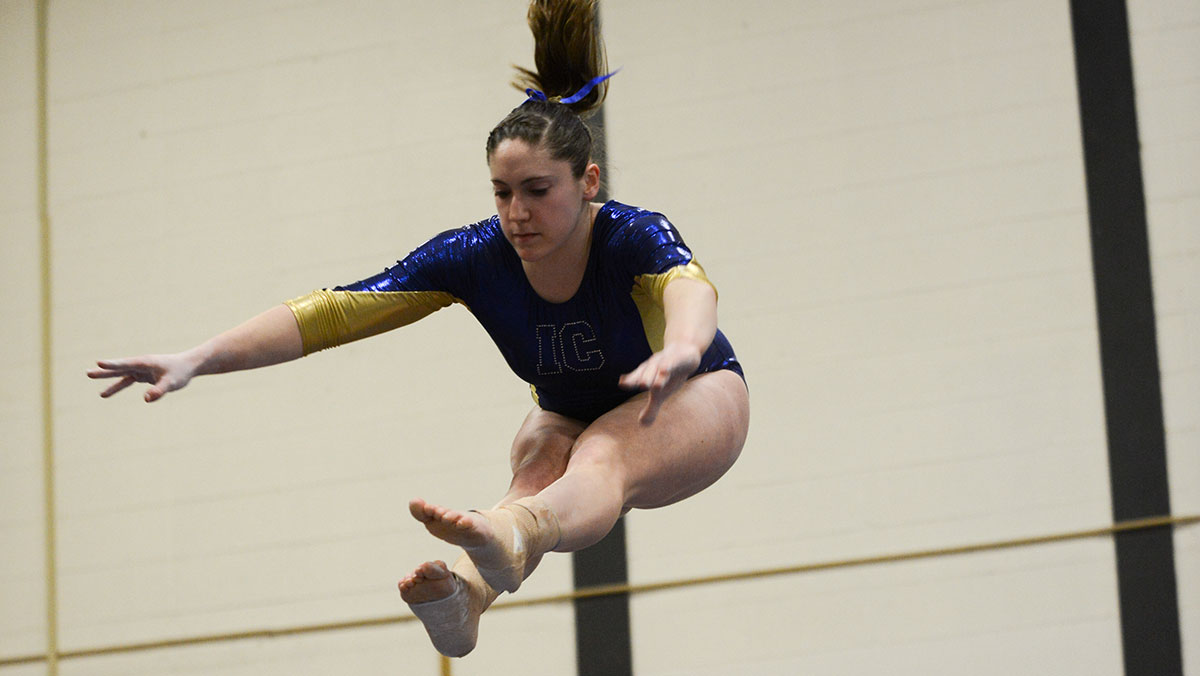 Jennifer Williams/The Ithacan
Senior Valerie Cohen leaps in the air during the gymnastics team’s meet Feb. 3, 2013. Cohen is the only senior on this year’s squad that also features 13 freshmen.
By Madison Bess — Contributing Writer
Published: January 21, 2015

As the only senior on the gymnastics team, Valerie Cohen said she realized she had a responsibility to lead the 21-gymnast squad, especially since it contains 13 first-year athletes.

“[Being the only senior] has been a bit of a difference,” she said. “I don’t really think about it, but it has been great to be a part of the leadership team.”

Cohen showed that leadership in the Bombers’ first meet Jan. 18 at Ursinus College when she posted the Blue and Gold’s best score in the floor event with a 9.525.

Junior Kate Woodward, a former teammate of Cohen’s, said watching Cohen compete on floor was one of the best memories she has of college gymnastics.

“Mistakes or no mistakes, you could tell she was having the time of her life on that floor,” she said. “I was so proud to call her my teammate.”

“Val is one of the top three leaders I have had in 29 years,” he said. “She easily accomplishes in a leadership sense what an entire class would accomplish.”

Over the last decade, the gymnastics team has always had more than one senior on its roster. However, Cohen’s situation is even more unique because not only is she the only senior on the team, but she has been the only gymnast in her class all four years of her Bomber career.

For Cohen, gymnastics has been a near-lifelong pursuit. The Massachusetts native said she began the sport in third grade and from there, her passion for gymnastics sprung.

When deciding where she wanted to go to college, she said Ithaca College was the only school that she was looking at that was known for good academics and had a gymnastics program. Four years later, she is the leader of a young squad looking for its first national championship since 1998. Cohen said she has gotten to know all the girls, and taking on such a huge leadership role has not taken away from her own gymnastics experience. She emphasizes leadership and said it’s not about her being a senior but about helping the whole team become leaders.

Freshman Becca Meister said Cohen motivates the rest of the team by constantly working hard in practice and encouraging her teammates.

“She always keeps the energy,” Meister said. “Even if she has a rough day, she is very motivational. She is also a very hard worker.”

Meister also said Cohen is humble and dedicated to herself and the team. She said Cohen is always the first one to start practice and get the warm-up going. Suddaby said Cohen constantly improves as a gymnast and a leader.

“He is the most positive person I have ever met,” Cohen said. “What I appreciate most is that he believes in me when I don’t believe in myself. He is a great influence in my life.”

Woodward said Cohen always knew what to say to her teammates before they competed, how to boost their confidence when they were down and how to make them see they played an integral role even if they were out for the season due to injury. She said Cohen’s leadership stems from the fact that she is a workhorse and that Cohen is the most supportive teammate she has ever had because she puts her teammates before herself.

“She is a team player and leads by example and vocally,” Woodward said.

Cohen said the leadership she has developed as a gymnast at the college has transfered to not only her academic life but will also help her once she graduates.

“I think that if anything, it is going to have an impact on me as a professional in the real world,” Cohen said. “It has shaped me into the person I am today. I have learned how to overcome obstacles and learned good work ethic. It has made me tougher. Toughness is a quality that the real world needs. I will be a better person because of it.”