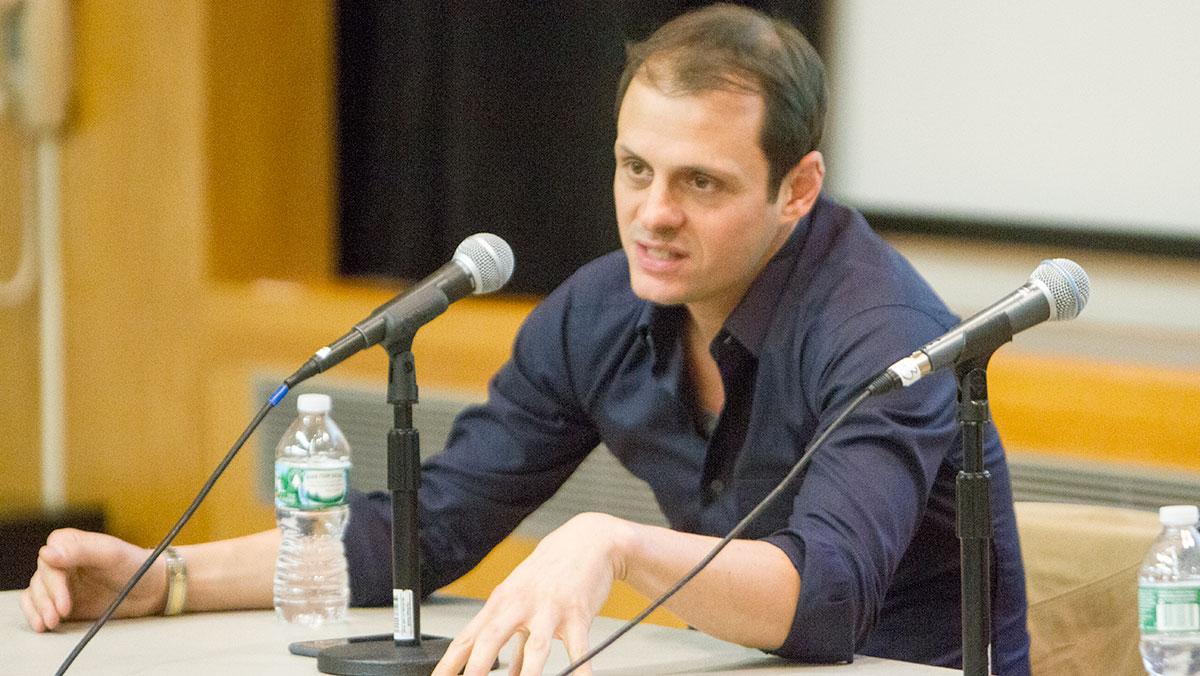 Jason DeLand ’98 visited campus on Dec. 1 as part of Ithaca College’s Mad Men Day, an event in Roy H. Park Hall that involved networking and a panel with alumni in advertising. DeLand, who played baseball at the college and twice led the Empire 8 in batting average, has gone on to help found the advertising company Anomaly. He developed the company into a global business, whose responsibilities include creating Budweiser’s popular Clydesdale Super Bowl advertisements. In addition, Anomaly represents clients from some of the world’s biggest companies, including Google, American Express and Converse. Last year, DeLand helped the college’s athletics department redesign its brand and implement its new logo.

Assistant Sports Editor Kristen Gowdy spoke with DeLand about working with the Anomaly, the Clydesdales and Budweiser, and his experiences with the college.

Kristen Gowdy: How did you guys come up with the idea for the company?

Jason DeLand: The idea for Anomaly came when I was at [Pacific Century Cyberworks] Hong Kong and was trying to figure out how to position that agency to be successful in new business. In that quest, I ended up talking to a lot of clients about the things that they were trying to figure out in their own organizations. What they were looking for is marketing solutions that were holistic. There wasn’t really any alternative for an agency-like entity to solve business problems holistically. I didn’t really figure that out until I went to Hong Kong, and I began hiring a multitude of agencies in Hong Kong. What I discovered is you have to have a company that doesn’t have silos. It needs a very broad range of senior diverse thinkers that have no incentive to recommend one solution over another. Anomaly is difficult to define and a stimulating-to-work-at company that is designed from the ground up and culturally to solve complex business problems.

KG: How did your experiences at Ithaca College and with the school’s baseball team help you get to where you are now?

JD: Without Ithaca College, there is no Anomaly. That’s an absolute true statement. I came to Ithaca College because I wanted to play baseball for coach Valesente and that was a dream of mine: to play college baseball. This place has a wonderful program. I discovered the Park School of Communications while I was here. And then just obviously being able to marry the experience here at the Park School with playing for coach Valesente and all of the teamwork and mental toughness, especially mental toughness, those things prepared me as much as anything I learned going to class.

KG: Can you talk about working with Budweiser and the Clydesdale ads?

JD: This is my fifth year now working with the Clydesdales and doing the Super Bowl ads. They’re American icons. A lot of people don’t understand the history of the Clydesdales. They were a gift from Adolphus Busch’s son, Angus Busch, to celebrate the repeal of prohibition, and they were used to deliver beer to the mayor of New York City to commemorate the repeal of prohibition and ultimately Franklin D. Roosevelt at the White House. They are majestic American icons, so working with them is like working with living history. It’s a great privilege to be doing advertising that wins the Super Bowl, in one side of it that does help shape culture.

KG: Where did that idea spring from?

JD: That’s something they’ve been using for many years. I think it’s a great way to communicate the values of the Budweiser brand and its heritage. They have a brewing heritage and brewmasters that are revered all around the world. In blind taste tests, Budweiser always outperforms everything. Budweiser, the brand, has always been a victim of its own success and people in this country take it for granted as being mass-produced, cheap beer when it is actually one of the most expensive beers in the world to brew. In working with the Clydesdales and doing work on the Super Bowl, it’s about trying to create an emotional connection with the audience around the values that Budweiser holds true. They do have those values and they do care for those animals greatly.

KG: Could you talk about your involvement with the college’s athletics logo?

JD: I’ve won Super Bowls and created global campaigns, and I’ve worked with professional athletes and great actors and models and everything. One of the proudest moments in my career was to work with Susan Bassett and the athletic department and create that new identity. I didn’t do very much other than help push it over the edge and give it some momentum and some focus. I was just more than thrilled and honored and excited to get back and work with the athletics department because I love it. Obviously I have a big spot in my heart for it and everything that it stands for. Being able to give a little back for what they gave me is fulfilling.