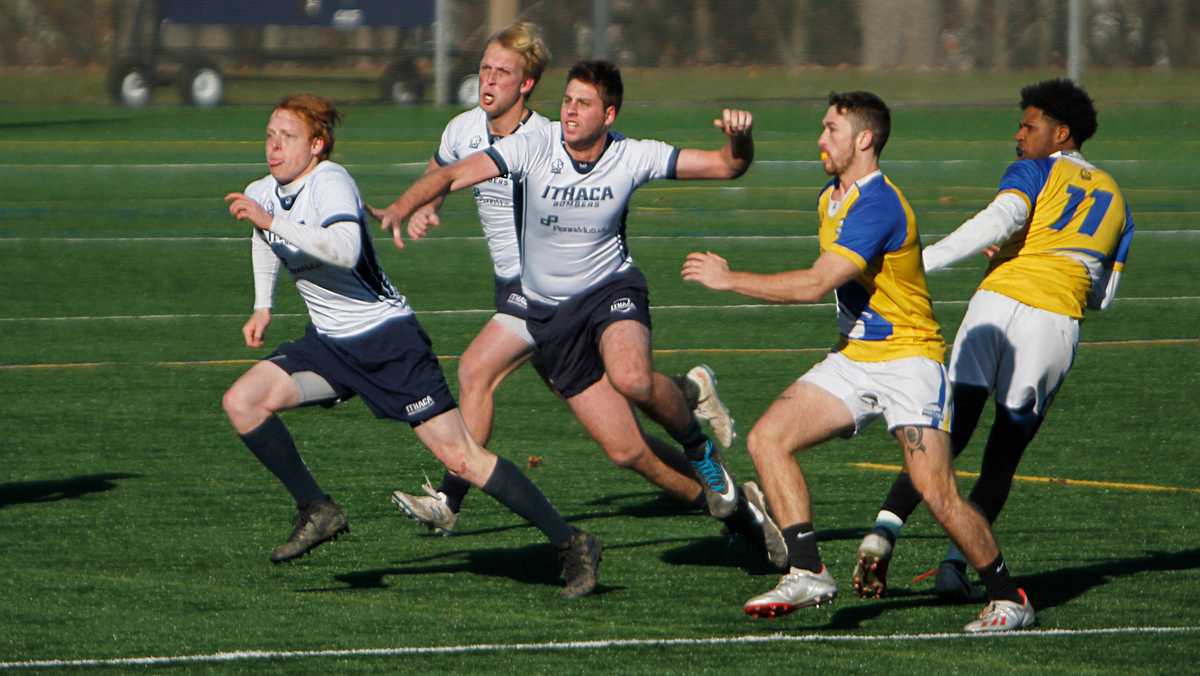 LEXI DANIELSON/THE ITHACAN
From left, juniors Will Blum and Steffen Nobles and senior Brendan O’Grady run past a pair of opponent during a game against Hofstra University on Nov. 16.
By Connor Wood — Staff Writer
Published: November 21, 2019

Although rugby at Ithaca College is a club sport, its players and culture have the competitiveness and drive similar to that of a varsity sport. Both the men’s and women’s teams entered their 2019 postseason play with championship-oriented goals.

Since it was reinstated in 2010, the men’s club rugby team at the college has been consistent in its success, and this season was no different.

The men’s team brought home the title of league champions after defeating Clarkson University 24–19 Nov. 9. The win secured a fourth–place ranking in the National Small College Rugby Organization (NSCRO) and improved the team’s record to a strong 6–0. The squad continued its dominant season, beating Hofstra 44–8 to advance to the Northeast Elite 8 in Albany on Nov. 23 and 24.

The women’s team, known as The Renegades, was formed in 1995. The team has had more success in its season this year compared to the past. Headed into the NSCRO tournament Nov. 9, the women held a record of 8–0.

The Renegades traveled Nov. 9 to Ohio for the NSCRO national championship qualifier tournament. After winning its first matchup Nov. 9 to Gannon University, the team fell in a second-round game at nationals, defeated by Minnesota State University Moorhead on Nov. 10. It finished with an NSCRO ranking among the top eight women’s rugby teams in the country.

Both the men’s and women’s teams allow any students to join their programs, including those who have no rugby experience. Their regular fall seasons typically consist of six regular–season games, three that are played at home and three played away.

Senior Matt Clements, president of the men’s program, joined the team when he was a freshman, and the team has had success all four years. Clements had no prior experience with rugby before coming to Ithaca.

“I played football in high school, and I was looking for another competitive sport, and the guys were very accepting of me right away,” Clements said.

The Bombers play in the National Small College Rugby Organization. The league is made up of three divisions of six teams, and Clements said Ithaca’s team is always in the race for a championship at the end of the season.

Clements said the players have what it takes to make it farther than previous years as long as they play the game of rugby they know.

“We have the caliber, but we have to keep doing what we are doing,” Clements said. “Nothing is handed to us. I know we can pull it out, but we have to focus on our style of rugby.”

Though rugby is a club sport at the college, Clements said, the team doesn’t think of it that way. The athletes bring a competitive nature onto the field every time they play.

“We bring it to another level because we want to be competitive,” Clements said. “We want to be good. As a club team we don’t get a ton of funding, so working hard is our way to meet the levels of our opponents.”

Clements said the men’s and women’s teams try to spend time together to make each team as strong as it can be.

“We share field time with them, our coach, Annemarie [Farrell], helps them out as much as she can, and we travel with them to Bermuda in the spring, so we have a good relationship with them,” Clements said.

Seniors Josie Hale and Adelai Spiegler, captains of the women’s team, have been part of the program’s dark days when the team went 0–5 during the 2018–19 season. Being 8–0 heading into the national tournament is an exciting change for the young Renegades.

“In the past three years playing here, it has always been we played our regular season and that was it,” Hale said. “We’ve never done anything like this before, so it is very exciting.”

Hale said she has played rugby for eight years and came to the college looking to play rugby. She found the team on the first day of orientation during her freshman year and has been part of it ever since. Spiegler joined the club in her sophomore year after being on the track team her freshman year.

Hale said the biggest difference this season from past seasons is the number of players on the team.

“A lot of our success has to do with the recruitment of rookies,” Hale said. “This year we have 24 rookies, and last year our team consisted of 20 players.”

Spiegler said she did not think coming into this season that the team would be in its current position.

“The beginning of this year was about rebuilding and going over the basics,” Spiegler said. “I didn’t see this coming. But it shows that hard work does pay off.”