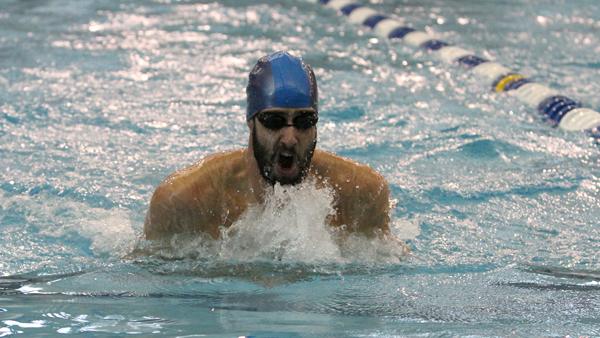 Amelia Marino/The Ithacan
Senior Jake Lichter competes in the 100-yard breaststroke during the men’s swimming and diving team’s 203-95 victory against Rensselaer Polytechnic Institute on Saturday. Lichter won the event with a time of 1:02.06.
By Doug Geller — Staff Writer
Published: October 29, 2012

The men’s and women’s swimming teams both defeated the Rensselaer Polytechnic Institute Engineers on Saturday by a wide margin at the swimming and diving meet at the Aquatic Pavilion in the Athletics and Events Center.

Senior Kelly Higgins said the victory showed how strong the Bombers could be coming off fall break and their first week of double session practices.

“We all swam really well even though we were all exhausted from hard practices,” Higgins said. “We learned we have the ability to push through and get the win.”

Towner said the strong performances from the newest members of the team are encouraging for the rest of the South Hill squad’s season.

“We’re training hard and have great energy from the freshmen, which makes everyone better,” Towner said.