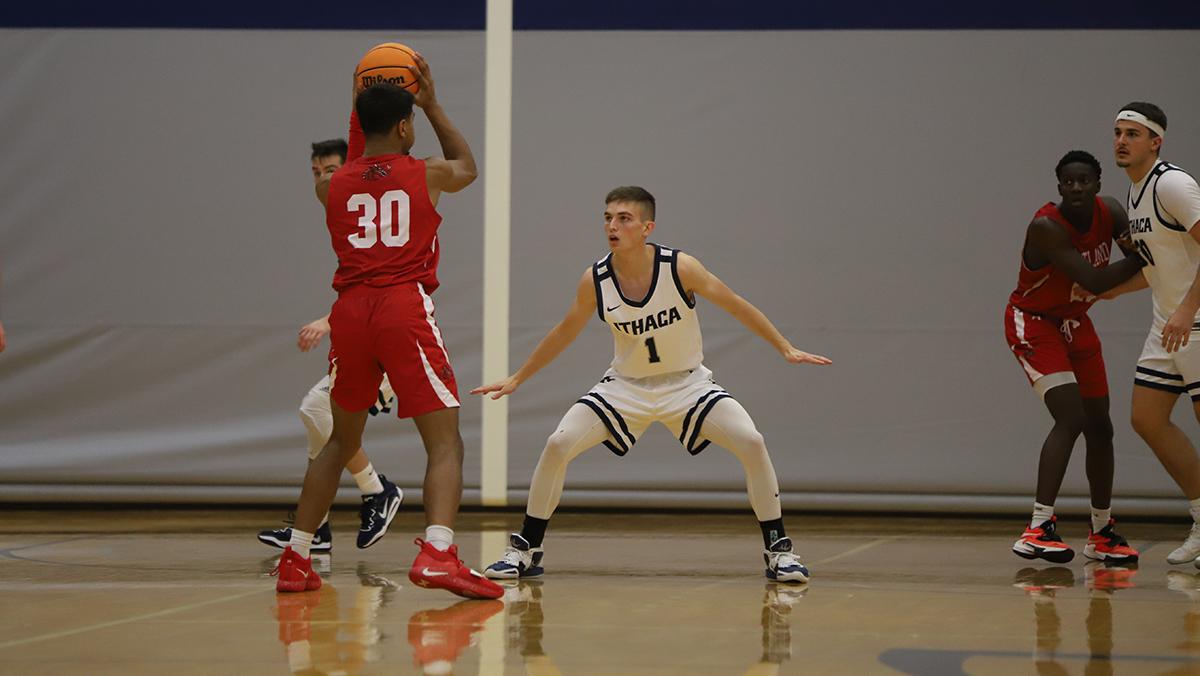 The Bombers trailed early in the first half, with Cortland holding the lead from the tip-off up until the 9:11 mark in the half when a Warech three-pointer gave Ithaca their first lead of the game at 23–21.

The Bombers would have the lead for a few minutes, up until the 1:45 mark in the first half when senior guard A.J. Lawton would hit the second of consecutive three-pointers to give the Red Dragons a 39–36 lead. Starting with Lawton’s three-pointer seconds prior at the 2:05 mark in the half, Cortland would go on an 11–0 run to end the half with a 44–36 lead over the Bombers.

Coming out of the half, the Red Dragons would extend their lead in the opening minutes to as big as seven points, but the Bombers began the claw their way back, bringing the deficit down to two at 52–50 after a two-point jumper by graduate student guard George Sikoryak III with 15:08 left in the contest.

Cortland would then go on a 7–0 run to pad their lead once again, leading 59-50 with 13:18 left in the game. The two teams would trade baskets for a couple of minutes until the Bombers’ defensive began to string together a couple of stops that allowed them to tie the game at 64 with 8:28 remaining.

The Bombers were not able to take the lead however, as Cortland would eventually build their lead back up to nine points, and despite a valiant comeback effort in the final minutes led by Wendell and Wennesten’s big buckets, the Bombers would only trim the deficit to one and fail to complete the comeback victory.

Despite the opening night loss, Bombers’ head coach Waleed Farid liked his team’s effort and the all-around contribution from his team.

“Our effort and our balance,” Farid said. “We had contributions from almost everybody who stepped on the court, which is a good thing. It’s gonna help us throughout this long season. Our depth, I’m happy about that.”

As the Bombers try to bounce back, Farid looks forward to seeing his team hit the court again.

“Can’t wait to get out there and play again,” Farid said. “I love these guys. I think this is a really good group of guys, we have some high expectations, we just gotta get our everyday and work towards it. I think we’re capable of a lot of special things, but we have to understand that none of that is going to be handed to us. Every night we go out, we’re going to play against a really good team and we have to show up.”

The Bombers will return to action against Montclair State University at 7 p.m. Nov. 11 in Montclair, New Jersey.