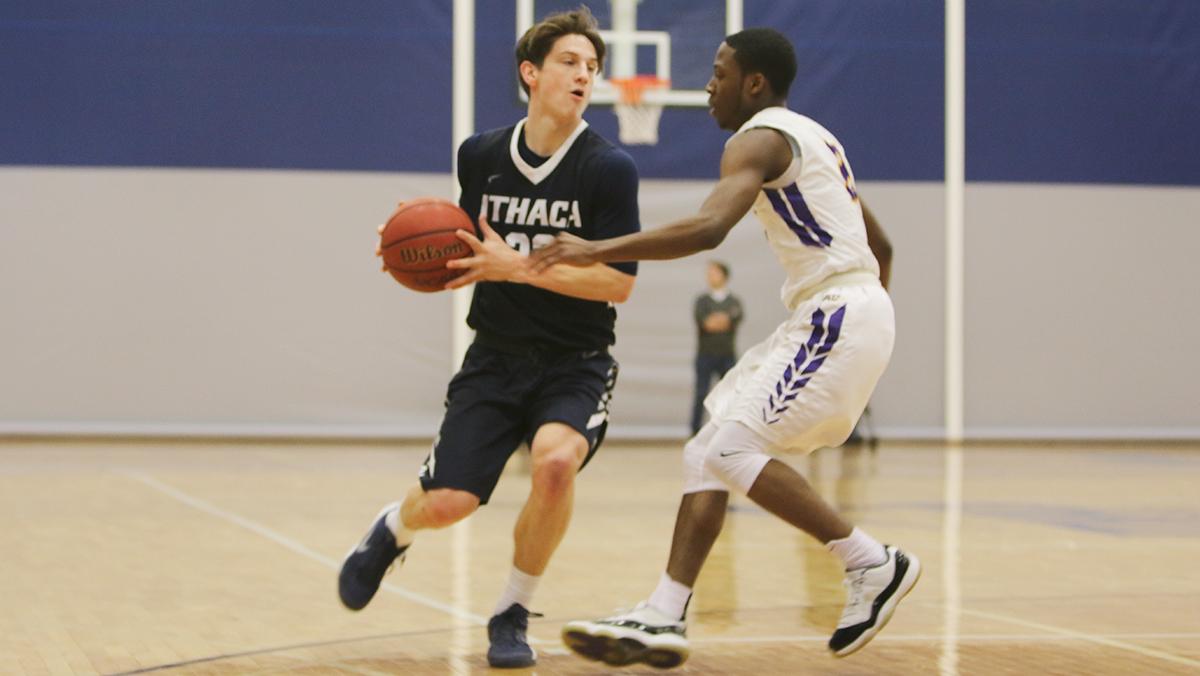 After a 98–93 win over Houghton College on Feb. 12 to keep its playoff hopes alive, the Ithaca College men’s basketball team continued to fight for the fourth and final playoff spot in the Empire 8 Conference championships with a 91–76 victory over the Alfred University Saxons on Feb. 13.

The atmosphere inside Ben Light Gymnasium was as bitter and cold as the conditions outside, as each team knew giving up any ground in the tight Empire 8 Conference standing meant the likely end of their season.

Senior guard Sam Bevan said the team was aware of the tight playoff battle going into the contest.

“We lost to Alfred earlier in the season,” he said. “This one was important to help us with playoffs contention and help us get into the playoffs, so the win felt great.”

The South Hill squad came out firing, leading the Saxons 29–14 in the first 10 minutes of the contest. Sophomore guards Marc Rozynes-Chasin and Caroll Rich led the Bombers in the first half with 12 points each.

However, the Saxons didn’t lie down easily despite the Bombers’ fast tempo. The Saxons eventually climbed all the way back from a 13 point deficit to cut the lead to as little as five in the final 10 minutes of the first half.

But the Bombers would not give up their lead that easily. With less than minute to go in the half, Rich stole a Saxon pass at mid-court and went in all alone for a two-handed dunk. After a quick Saxons bucket seconds later, the Bombers went into the half leading 45-40.

Rich, who is only 6’2, said there are moments in the game where it is acceptable to attempt a dunk, and that that was a good chance to try it.

“I got the steal,” Rich said. “I just saw that there was no one ahead of me and just knew I had to take it.”

As the second half began, the Bombers began to look like they were going to pull away again, increasing the Saxon’s deficit to 10 points as they had multiple times in the first.

The Bombers led by 13 with fewer than nine minutes to play.  With 6:42 remaining, Bevan went for a breakaway layup and was fouled hard by Saxons freshman guard Sage Brown, which sent Bevan to the foul line. The Saxons continued their aggressive play with a hard charging foul again on Brown two minutes later.

Saxon junior forward Eric Adams hit a 3-pointer to make it 81–76 to keep the pressure on the Bombers. Seconds later, Chasin destroyed all fears of a Saxon comeback when he rushed down the court and made a nice bounce pass to sophomore guard Joey Flanagan that started a 10–0 run to secure the victory for the Bombers.

Despite the win, the Bombers gained no ground in the Empire 8 Conference standings, because Stevens Institute of Technology had a 94–67 victory over Utica College. That leaves the Bombers still in fifth place with two games to play.

The Bombers continue their playoff run 6 p.m. Feb. 19 home in Ben Light Gymnasium when they take on Utica College in their second to last game of the season.

Rich said despite not locking up a playoff spot yet, the team is just focused on its next game.

“We’re at the point of the season where losses are critical,” Rich said. “So we’re just taking it like it’s one game at a time and playing each game like it’s the championship.”