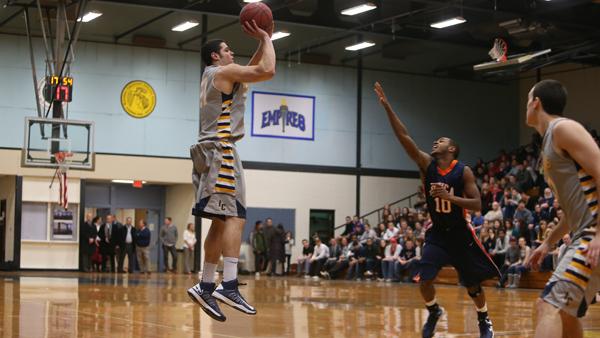 The men’s basketball team will look to successfully defend its Empire 8 title as it travels to Hoboken, N.J., for this weekend’s Empire 8 tournament.

The Bombers will enter the tournament as the No. 2 team and will play St. John Fisher College at 8 p.m. Friday. The victor will play the winner of the preceding game between top-seeded host Stevens Institute of Technology and Utica College at 3 p.m. Saturday.

The Blue and Gold only went 5–4 in their final nine games, as they were without senior forwards Travis Warech and Andrei Oztemel for much of that stretch. Warech returned for the final two games of the regular season, averaging 21 points and 10 rebounds in that stretch. Head Coach Jim Mullins said he has doubts over the fitness of Oztemel, who is still being bothered by a high ankle sprain. Warech’s return looks to solve a rebounding issue that stood out during their slump.

Fisher enters the conference tournament on a hot streak. The Cardinals have won every game since losing to the Bombers on Jan. 18. They have the conference’s best shooter in senior center Jason Norsen, who finished the regular season shooting just under 63 percent from the field. The Cardinals kept their opponents to only 60.4 points per game during the season and 59.4 points during their winning streak. They lost both games to the Bombers by a combined total of five points.

Utica won its final four games to overtake Nazareth for the final spot in the Empire 8 tournament. Junior forward Connor Maisch, who leads the nation in 3-point field goal percentage at 52.4 percent, leads them. Maisch anchors the conference’s most potent offense as the Pioneers average 76.1 points per game. Opponents are equally prolific against them as they are last in the conference in opponent points per game at 78. Opponents also attempt — and make — more 3s against Utica than any other team in the conference. The Pioneers enter the Empire 8 tournament at 12–13 overall, and they would be the first team ever to win the conference tournament after finishing the regular season with a losing record.

All in all, the Bombers look to have a good chance to repeat as Empire 8 champions.